The Dutch Official Whose Wild Novel Started an Anti-colonialist Revolution

Idealistic and greedy, enlightened and a racist, a lover of humanity and an egoist – Eduard Douwes Dekker, aka Multatuli, produced one of the most audacious pieces of anti-colonialist writing ever written. 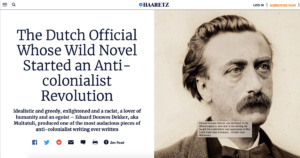 At the end of the last century, and millennium, The New York Times asked a number of writers and thinkers around the world what they considered to be the greatest story of the past thousand years. The Indonesian writer and political dissident Pramoedya Ananta Toer offered a particularly piquant response. For hundreds of years during the second millennium, he noted, spices were more highly valued than precious metals. They were used in religious ceremonies, as medication and to improve the taste of food, the latter of which was crucial during periods in which the variety of foodstuffs was limited to a degree that’s hard to imagine today. The Europeans’ craving for spices led to journeys to new realms aboard warships and spawned unprecedented wealth for the conquerors.

The most abundant source of spices, as well as for tobacco, sugar and coffee, was the archipelago of thousands of islands and hundreds of cultures that is known today as Indonesia. Not long after the Dutch fleet’s arrival, in the late 16th century, the capital of the archipelago, Batavia (today Jakarta), became the world’s largest trading hub. For more than a century the Amsterdam-based Dutch East India Company was the largest commercial enterprise in the world.

To augment their profits, the Dutch balked at nothing. Thus, among other actions, they massacred almost the entire population of the Banda Islands, a group of 10 Indonesian islands that were the world’s only source of nutmeg, and also transported slaves and prisoners of war there to cultivate the spice, which yielded a profit estimated to be 60,000 percent.