The Massacre of the Bandanese 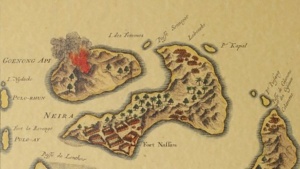 VOC Governor General, Jan Pieterszoon Coen, directly led the crucial expedition to the Banda Islands, Maluku, in 1621. This time, the Dutch fleet was big enough to send thirteen transport ships along with a few scout ships, carrying thousands of passengers.

Jan Pieterszoon Coen had a special mission apart from taking control of the spice-producing islands of Banda. He held a bitter grudge against the Bandanese people, which he had nurtured for 12 years.

Jan Pieterszoon Coen was present at the site when an event happened 12 years earlier. He even almost lost his life. Luckily, Coen managed to escape from the bloody incident on Banda Naira.

At that time, Coen accompanied Admiral Pieterszoon Verhoeven, the leader of the first VOC expedition to the Banda Islands in 1609. As a clerk he attended the negotiation that was arranged after the invitation of the “Orang Kaya” (= Rich People) – a term referring to the leaders of Banda – on 22 May 1609.

The Banda community had established relations with the British as well, who also had their eyes on the spice heaven in Maluku. The presence of the VOC in Banda created tension, to that extent that it was considered necessary to hold negotiations. (Pattikayhatu, 1983:31).

The Orang Kaya of Banda offered to negotiate with the VOC, on the term that two people were sent as hostages. Verhoeven agreed. He departed with other expedition leaders, including J.P. Coen who had always followed the Admiral along.

To guarantee the request of the Orang Kaya, Admiral Verhoeven added two Dutch merchants named Jan de Molre and Nicolaas de Visscher as hostages. Nevertheless, Verhoeven still brought his troops. Besides that, a few British prisoners were also brought along to be presented as a gift.

The VOC delegation headed to the agreed negotiation location, which was under a big tree on Naira Island’s eastern coast. However, when Verhoeven’s group arrived nobody was waiting for them.

Verhoeven then commanded his right-hand man, Adriaan Ilsevier, to look for the whereabouts of the Orang Kaya. Not long after, Ilsevier found the Orang Kaya in a settlement deep in the jungle. They told him they were scared seeing the VOC arriving with fully armed troops. The Orang Kaya requested Ilsevier that Verhoeven meet them with just a handful of people.

That request was granted by Verhoeven who asked less than 30 people to accompany him. Turned out, it was a trap. When they arrived at the location, the small VOC group was ambushed. Not less than 27 Dutch men were killed, including Verhoeven (Rosihan Anwar, 1986:182).

Coen, who was part of the delegation, was lucky because he managed to escape, albeit not before witnessing the massacre firsthand. With the remaining expedition group, he hurried in leaving the islands.

The ambition of the Dutch to control the Banda Islands had to be postponed for a long time. The occupation was realized by Coen who still held his bitter grudge.

The Second VOC-Mission to the Nutmeg Heaven

After that unfortunate event in the Banda Islands, J.P. Coen’s career lift off. In 1617, he was promoted as Governor General of the VOC with placement in Batavia. Though he had reached the highest position in his career, Coen could not forget the dark memory he endured in Banda Naira a few years prior.

Apart from that, the Netherlands still aimed to control the spice-producing islands in Banda, especially nutmeg which at that time was one of the most profitable and high-priced commodities in Europe.

All of the six Banda Islands produced nutmeg along with clove. The most potential producing islands were Lontor Island, Run Island, Ai Island, Neira Island, and Rozengain Island (Pradjoko and Utomo, 2013:313).

Considering what had happened in 1609, along with the ‘trick’ of the Orang Kaya, Coen concluded that the VOC could only control the spice trade in the Banda Islands through evicting or killing the inhabitants. Around that time, the Banda population had reached 14.000 people, the majority of them were Muslims.

Opportunity arrived in 1621 when the Board of the VOC approved Coen’s plan to dispatch the second major expedition to the Banda Islands in Maluku. Banda had to be brought down to its knees, be it with peace or with war. Immediately, preparations were carried out, which included Coen’s wish to take revenge.

The Bandanese People Massacred by the Dutch

Coen directly led the second Dutch expedition to the Banda Islands in 1621. Their first destination was to dock in Neira Island, the place previously used by the late Admiral Verhoeven, where he rebuilt the old 1609 Portuguese fortress. That fort was then renamed as Fort Nassau and became one of the VOC’s defense centers in Maluku Islands.

On 27 February 1621, the troops led by Coen arrived in Fort Nassau. Afterwards, the VOC directly attacked and took control of Lontor Island, along with choosing one of the villages on the island as their headquarter (E.M. Jacobs, 2006:20).

Captain Martin ‘t Sonck was appointed as the Banda Governor with office in the village meeting hall. The mosque next to the meeting hall was then converted into a Dutch lodging. The inhabitants did not agree to this conversion, but they couldn’t do anything.

Tense and gripping days passed without any significant incident. Until one night, a loud clang was heard from inside the mosque. As it turned out, the chandelier fell by itself. Yet, that noise made the Dutch suspicious and accused the local Bandanese of planning an attack.

Chaos was unavoidable as the VOC responded harshly, cruelly even. Inhabitants were slaughtered mercilessly, not only in Lontor and Naira Island, but also in other islands. Approximately only 300 people, managed to escape.

The VOC troops along with their mercenaries destroyed everything they encountered on their path, including residential houses and boats that belonged to the inhabitants, they also killed residents that were unable to escape.

On 8 May 1621, the Dutch captured 8 Orang Kaya. They were accused of being the masterminds behind the chaos and they were executed by 6 ronins. Their bodies were severed into 4 parts (Des Alwi, 2005:79).

On the same day, 36 Bandanese Orang Kaya were captured and beheaded. Their decapitated heads and bodies were then impaled on bamboo sticks to be displayed to the public as a warning. In total, 44 Bandanese Orang Kaya’s became victims of the VOC cruelty.

Coen did act brutally as a manifestation of his revenge. Almost all inhabitants of the Banda Islands were destroyed very cruelly and inhumanely (Leirissa and Latuconsina, 1999:111). It was estimated that out of 15 thousand Bandanese residents, only less than 1000 people remained as the result of that massacre.

After successfully “cleaning” Banda of its people, the Netherlands then completely controlled the spice-abundant Banda Islands and received enormous profit for tens of years to come.
— 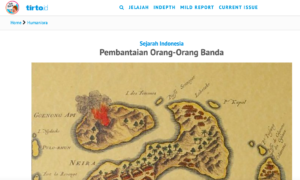