The end of the Indies

The Netherlands is looking for the good side of history

Amsterdam has decided to name new streets in IJburg after anti-colonial heroes. In NRC, correspondent Nina Jurna wrote about her Surinamese great-uncle Louis Doedel, who received this honor. That the city of the Golden Age has chosen to show through their map that Dutch history was not only written by men who had a leading position in the VOC, is something that should be encouraged.

One of the post-colonial heroes who will be honored with a street name is, for example, Maria Ulfiah, a fighter for women’s rights and in 1946 the first female minister in the Indonesian cabinet. Another name is Tan Malaka, a communist leader, who was killed in 1949 by supporters of the republican government of Sukarno.

In the magazine Historia.id, the Indonesian historian Bonnie Triyana wondered how come that Sukarno himself, who is seen as the founder of the Republic of Indonesia together with Hatta, was not honored with a street name.

Good question. Certainly today, when the Japanese capitulation of 15 August 1945 is being commemorated for the 74th time. This was the real ending of the Second WorldWar. Two days later on August 17, Sukarno and Hatta proclaimed the Indonesian independence. However, many people who are going to commemorate the end of the Second World War this Thursday, do not see Sukarno as hero. Earlier they saw him as an “office boy” of the Japanese that they hated.

Commemorating tragic events from national history also means making an effort to come to terms with that history. To continue. On the Dutch side, many children, women and men were killed by Indonesian pemudas, young fighters, during the Indonesia War. Often with unimaginable cruelty. Recognition of that suffering and also the suffering caused by Japanese soldiers during the occupation of the Dutch East Indies, that is the focus on 15 August.

Yet knowing that the complexity of past events requires later generations to look further. To pay attention to the fact that the Indonesian population has suffered just as much under the barbaric Japanese regime. And to take into account the fact that the war that the Netherlands launched after the Indonesian proclamation was also barbaric. In 2005, the then minister Ben Bot (Foreign Affairs, CDA) rightly admitted that the Netherlands in that war was standing ‘on the wrong side of history’. Nevertheless, it took until 2012 before a Dutch ambassador expressed his regret to Jakarta, against the background of the court ruling on the Rawagede case.

Indonesian historians start looking at what happened during the so-called “Bersiap-period” as well. The recognition that [Indonesians] also made dirty hands during the “glorious struggle” for independence does not fit well with the nationalist founding myth, which became common particularly under President Suharto’s reign.

Self-examination can be healing for both countries and for mutual relations. It would be helpful if the Netherlands finally recognized August 17 as the foundation date of Indonesia. In the end, it was not only the colonial war that was wrong. To speak with Ben Bot, the Netherlands was already on the wrong side of history when the VOC became active in the archipelago.
— 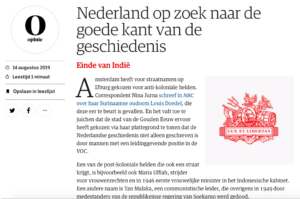