The Netherlands tortured on Bali: what was the war of independence about?

* For this article journalist Groenewoud talked to K.U.K.B. chairman Jeffry Pondaag on the phone, yet he did not write down any of the information that Pondaag told him. Let alone that Groenewoud mention his name or the name of the foundation. On the contrary, he gives the false impression that the Dutch state voluntarily started to pay damages to Indonesians. 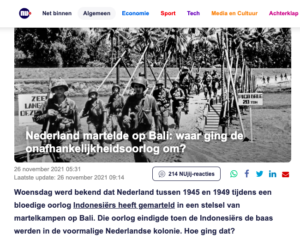 On Wednesday it was announced that between 1945 and 1949, the Netherlands tortured Indonesians in a system of torture camps in Bali during a bloody war. That war ended when the Indonesians took control of the former Dutch colony. How did that go?

From the seventeenth century onwards, (heavily armed) Dutch merchant ships sailed under the flag of the Dutch East India Company (VOC) to the Asian archipelago that would later become known as Indonesia. The thousands of islands contained rare and valuable spices, such as nutmeg and cloves. Therefore, other European countries, such as Portugal and England, were already active in the area.

After a lot of struggles, the VOC managed to become the most important European power in the archipelago. The Dutch no longer sticked to trade only: they also occupied territories. After the demise of the VOC, those areas became a Dutch colony, which was called the Dutch East Indies.

In the Dutch East Indies, as many natural raw materials (such as wood and petroleum) and agricultural products (such as spices and coffee) had to be extracted or grown as much as possible, so that the profits could be sent to the Netherlands. The local population was treated badly. Some people were even enslaved.

During World War II, Japan was in power in the Dutch East Indies. That country invaded the Dutch colony in 1942. Many people died during the Japanese occupation.

Just after the Second World War, groups of Indonesian paramilitary organizations and gangs used extreme violence against, among others, (Indonesian) Dutch people and people they suspected of collaborating with the Dutch authorities. That period is known as the Bersiap. The Indonesian fighters murdered thousands of Dutch people who had just been liberated from Japanese internment camps.

After the war, the Netherlands wanted the colony back, but more and more Indonesians supported Indonesia’s independence.

Our government sent soldiers to the Dutch East Indies to take back power. In the Netherlands this was called ‘police actions’ for a long time (which is somewhat reminiscent of the intervention of the police in our own country, for example during a demonstration that got out of hand).

Today historians prefer to use a different term: the Indonesian war of independence. It is estimated that more than 100,000 Indonesians died as a result of violence. Also 4,500 Dutch soldiers did not survive the battle. The Netherlands also tortured Indonesians on a large scale.

Despite all Dutch violence, our country was unable to reoccupy Indonesia. The colony became independent on December 27, 1949. Since then, the archipelago has been called the Republic of Indonesia.

That only happened after great international pressure on the Netherlands; the United States threatened to stop American development aid to our country for reconstruction after World War II if the Netherlands continued to wage war against Indonesia.

In 2020, the Netherlands apologized for the violence that our country had used against the Indonesians. King Willem-Alexander did this during a state visit to Indonesia.

In 2011, the Netherlands offered compensation to widows of Indonesians who were killed during the war of independence. Since 2020, children of Indonesian victims can receive 5,000 euros in compensation.

In February 2022, a major Dutch study on the period 1945-1950 in Indonesia will be published. This includes looking at Dutch violence in Indonesia.

Researchers have already said that the Netherlands is guilty of violence that went too far even in wartime. Historian Anne-Lot Hoek told NU.nl that it is important that the Netherlands knows what we have done to the Indonesians by turning their country into a colony and waging war against them.
—