Why the Dutch do no respect Sukarno 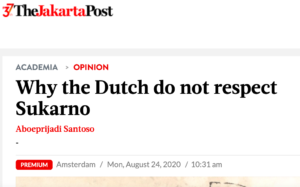 The daughter of president Sukarno and his Japanese wife Ratna Sari Dewi is a former TV journalist in Japan. Now married to a Dutch businessman and living in London, she grew up in Paris and has been educated in the United States. Like her mother, she still holds an Indonesian passport. “My father created this passport by fighting for freedom and social justice.”

It may be a sign of changing times that the post-World War II generations in Europe start to look differently at the contemporary issues – like Sukarno’s youngest daughter on the post-Sukarno era.

In a deep sense of anger, Kartika says she loves her country and will never forget her father, his achievement and his very last days.

“I have known him through history, his former colleagues and family. I have always been inspired by my father’s philosophy and sense of nationalism. Uncle Willem Oltmans [a Dutch journalist who was a good friend of Sukarno] told me that one day he was in a village and the villagers wanted to carry him on a bamboo chair. But he said they should carry the Indonesian flag and he would walk along with the villagers.”

She respects both Sukarno and Hatta as the symbol of Indonesian unity. “They had different characters but complemented each other. It was also a symbolic union between Java and non-Javanese. And therefore all Indonesians.”

Since the day her father passed away on June 21, 1970, 15 hours after Kartika and her mother landed in Jakarta, she “felt a terrible loneliness.”

“I saw my father’s body and many people were crying, yet there were soldiers carrying guns.There was an eerie feeling between tears and threat.”

Sukarno was to remain vivid in her memory – not least because of Soeharto’s treatment of him in his last days.

“My father told my mother that she should deliver me in Japan and return to Indonesia once the situation had improved. However, he was put under house arrest a few days after I was born (in Tokyo). We were not allowed to return. My father was denied medical care and could not see his family. He was isolated.”

“This was emotional torture for someone like my father. During the COVID-19 confinement, my thoughts were with him thinking how he must have suffered. I am still angry and sad with the way he was treated. Such a cruelty was not necessary for the founder of our nation. He was not even granted a trial and was treated like a criminal.” She’s proud of his legacy.

“Following his death, the Soeharto regime had created negative propaganda about my father which lasted for decades. Despite their efforts to tarnish my father’s name, he remains today the Father of the country. Soeharto would not have had anything without him”.

Kartika knows much of her country’s history but is also critical of the Dutch treatment of her father and the way they handled Indonesia after World War II.

“My father fought bravely against the Dutch. He was put in prison by the Dutch government from 1930 and sent into exile in Ende from 1934 to 1938. Still today, my father’s name remains controversial in the Netherlands.”

“The Dutch government as well as the king continue to show up in Indonesia for business. But how can business be done when the past is not properly settled? The Dutch expect preferential treatment from Indonesia, but they don’t respect my father and what he represents for Indonesia.”

Kartika lived in Indonesia for several years from August 2010 to 2014. In 1998 she founded the Kartika Soekarno Foundation, which works for Indonesian children and women (www.kartikasoekarnofoundation.org).

The foundation has served over 130,000 Indonesian children. “We invest in the first years of a child’s life because those are the crucial years for brain development.

I feel the Dutch government has not done much for Indonesia in the field of education. For its independence, Indonesia had to pay the Netherlands the sum of 4.3 billion guilders. The last payment was in 2003.”

The Dutch government can give financial compensation to her former colony Suriname, why not to Indonesia, Kartika wonders. Referring to recent debate on Indonesia in the Dutch media, she criticizes fiercely the Dutch attitude on her father.

“Millions of Indonesians died because of the Dutch and no one talks about it in the Netherlands when they commemorate WWII. The Dutch only talk about the fact they were in Japanese camps but never about Indonesian deaths.”

“The Dutch government can’t even name a street after my father because they don’t want to recognize him as a freedom fighter.” “The Dutch have streets for freedom fighters such as Gandhi, Mandela, but not for my father. They are still upset that Sukarno freed Indonesia.

The wealth in the Netherlands all came from Indonesia, not Suriname.” Indeed, some historians have argued the Dutch post-World War II era needs a fresh review.

“I have hope that history will not continue to be taught through the Dutch lens. I am a big fan of [Dutch] Queen Maxima, a perfect modern, charismatic Queen,” Kartika says.
—

The writer is a journalist residing in Amsterdam.