Writing a path to redemption 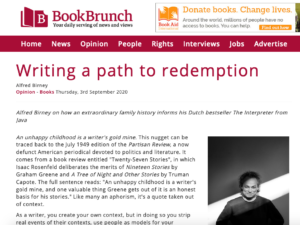 An unhappy childhood is a writer’s gold mine. This nugget can be traced back to the July 1949 edition of the Partisan Review, a now defunct American periodical devoted to politics and literature. It comes from a book review entitled “Twenty-Seven Stories”, in which Isaac Rosenfeld deliberates the merits of Nineteen Stories by Graham Greene and A Tree of Night and Other Stories by Truman Capote. The full sentence reads: “An unhappy childhood is a writer’s gold mine, and one valuable thing Greene gets out of it is an honest basis for his stories.” Like many an aphorism, it’s a quote taken out of context.

As a writer, you create your own context, but in doing so you strip real events of their contexts, use people as models for your characters, even relocate buildings or reroute rivers, all in the service of your prose.

Back to the beginning. My childhood was more than unhappy. It was a disaster. My father was a disaster, my mother was a disaster, their marriage was a disaster, our family life was a disaster and, after the family fell apart when I was 13, the years I spent in children’s homes were a disaster too. Luckily, I had my guitar and the radio to dream along to, and I was riddled with enough optimism to drag myself through it, more or less in one piece. On the streets at the age of 18, I embarked on a vagabond existence, guitar slung over my shoulder. Let’s give it a whiff of romance and call it Bohemian. Wherever I went, I announced that one day I would write a book. A claim no one took the least bit seriously. This was the late Sixties, early Seventies, and writers were gods.

Undaunted, I began scribbling the odd line. Lyrics, then poetry. Then came fairy tales, the first stories you hear as a human being. The first stories I heard were my father’s tales of war, but that’s for another time. I soon progressed to writing my first short stories, which fell foul of the literary gatekeepers of the day. Then, in 1984, I won a writing competition run by a national newspaper. My story was printed and distributed in an edition of 75 copies, a collector’s item now that The Interpreter from Java has become a bestseller.

Did I set about mining my childhood as an honest basis for my stories, as Isaac Rosenfeld said of Graham Greene? No. Back in 1987 I believed that a true writer should leave any such basis well alone. My debut novel was pure fiction. Not a shred of autobiography, apart from the odd familiar backdrop. Father, mother, war, my mix and clash of cultures: none of these things entered into it. But as I wrote my second novel, my father – in fictionalised form of course – sidled his way into a single chapter, and it wasn’t long before I decided to draw freely on my family history. This I did in my third novel, my literary breakthrough in the Netherlands and later in Indonesia. It centred on my Chinese grandmother, a woman I had never known except as a constant presence in my father’s stories. As my protagonist, she was conspicuous by her absence. Weaving my storylines around that mysterious woman on Java enabled me to play with all kinds of motifs the Dutch can’t get enough of: enigmas of the East, a broken multicultural family, racism, sorcery, and a journey to my father’s homeland.

With hindsight, I sold myself short: the father figure I created was too much the victim of his colonial past, of the war, of the racism he encountered in the Netherlands, the country of his dreams. I had to find another face for that war-crazed madman. I turned him into a martial arts teacher who subjected his children to a spartan upbringing. Nowhere near a frank account of my own family history, but I was on my way. At the turn of the century, I fled back into pure fiction with a novel that featured my parents as music-hall entertainers – talk about flights of fancy! – and myself as an only child, raised by a grandmother I never had.

My career took an unexpected turn when I started writing columns for the local newspaper in 2002. I earned a living from writing to order, and only returned to narrative literature in 2009. These new works of mine grew into a trilogy of novellas that once again circled in a wide orbit around my so-called “gold mine”. It’s a matter of daring. Entering the fray takes courage.

After this slew of novels, short stories, essays, columns, articles and even book reviews, in 2012 I was finally ready to mine that vein of precious metal. Casting literary convention aside, I composed a polyphonic novel inhabited by people who were not far from reality. Over the years I had amassed a vast archive: interviews with my mother from 1986, a journal of my travels across Java from 1988, my father’s memoirs, a store of columns, short stories, emails, and photographs. Too much to incorporate. You can never capture life in a novel.

Looking back on your life is a lot like fiction. Selecting fragments to form a composition. My goal is not to tell the reader everything I have to say – the result would be an unfinished book. I want to take the reader with me, apply a jolt to the heart. Life is an experience. So too is reading. A literary scholar once said to me: “When you feel pain as a writer, your reader should feel pain too.” For The Interpreter from Java I waded deep into my memory. It was hard going. Only in the book’s fifth and final section do I return to the present and, with the reader, go in search of redemption.
—

On September 3, 2020, the London-based publishing house ‘Head of Zeus‘ released ‘The Interpreter from Java’, translated by David Doherty: