How colored are your archives?

As the grandson of an Indonesian freedom fighter, I would like to respond to the Dutch debate on war crimes that I follow from a far distance. My reaction might be relevant now your government has decided to start an investigation. Perhaps it is valuable when I share my views with you before a research question or an investigation team is assembled.

Already in advance, various articles assume that we Indonesians do not want to criticize our share in the violence. We would only be interested in glorifying our ‘heroes’, we still believe in our ‘foundation myth’. A ‘myth’ because in reality it was not just a colonial war but more a civil war in which Indonesian battle groups were mainly fighting each other. The reason that we do not want to acknowledge this is because it endangers the legitimacy of our State. Thus a ‘myth’, as if Indonesian Independence was a kind of fairy tale. I argue that this is typically a Dutch idea.

It is true that not all Indonesian regions wanted to be ruled by Java, it is true that we also fought against each other, but what I miss in the previous statement is the influence of the Dutch ‘divide-and-rule policy’. Was the chaos that existed after 1945 not related to the Dutch colonial policy as well? Let’s not forget that before the war, every time we tried to organize ourselves under Dutch rule, it was crushed down immediately. During the decolonization war de Dutch chose for a ‘federalization-policy’. Regions outside Java were promised Independence, with the aim to weaken the unity of the new Republic. What surprises me; apparently the propaganda that came with this strategy is still influencing current thought in the Netherlands when they use the word ‘foundation myth’. In reality I believe that having a common enemy, the Dutch, certainly created a sense of unity, although not much of this unity remained after the Dutch were finally defeated.

Though the focus in our commemorations is indeed on our national heroes, it is in Indonesia not quite unknown that groups were also fighting each other. Obviously not all groups recognized the Republic government. For example “Darul Islam” who wanted to establish a Muslim state or those who intended to create a Communist country. There are lots of books about that and also museums.

By portraying Indonesians in advance as ‘unwilling’, it is almost impossible for us to react. Every comment that goes against this frame will be seen as a confirmation of the denial. But instead of ‘unwillingness’ we are dealing with a difference in perspective. Exactly these prejudices hurt me as Indonesian and do not encourage me to have a conversation. Therefore I think if the Dutch really want to study the traumas of the past together with Indonesians, it is essential to view each other’s perspectives openly and not in a pedantic way. More important than collecting historical evidence, are the perspectives that create our framework.

It is true that Indonesians in general are not familiar with the term Bersiap and perhaps even not all Dutch people know what the term stands for. Yet I think you have to distinguish the general opinion from the specialist opinion. In 2013 I visited the Netherlands and I discovered for instance that most of the people don’t know much about what their ancestors did to my country. Therefore I think that a book like ‘Soldaat in Indonesië’ is maybe known among experts but I wonder whether his conclusions are common knowledge. The same applies to Limpach’s study. In Indonesia it is not very different, general people do not know about the Bersiap. Historians however heard about it and sometimes discuss it too. Of course it is not our main interest, not because we are naive and only want to glorify our heroes but because it is human to remember your own suffering first.

From 1945 we mostly remember the British bombing on my hometown Surabaya that killed more than 10,000 people. I understand completely that you don’t know about that and that you are more concerned with the killings of your own people. Nevertheless, I believe that my countrymen (at least when they have interest in history) are smart enough to understand that the revolution was a bloody battle. I find it logic that during our Independence struggle not only Indonesian people got killed.

What I find problematic in the Dutch discourse is that sometimes the impression is made as if we are more ignorant and naive than Dutch when it comes to history writing. As if we have to follow the good example of the Netherlands. As if we need Dutch to teach us about that. But is it like that? I don’t think that many Dutch know about Indonesian war criminal Sabarudin who was executed by the regular Indonesian army because he murdered civilian Indo-Europeans during the Bersiap. While, has there ever been a Dutch soldier held accountable for war crimes against innocent Indonesians?

Recently I read a Dutch article that pointed out that our one-sided imagination of Dutch is purely based on popular movies, but if I may ask, on what exactly is your image of Indonesian ‘pemuda’ based? What do you really know about what we wrote about our past so far? How colored are your archives? If Dutch and Indonesia really want continue on an equal level it is not advisable when the former colonizer is dictating us about what should happen on Indonesian side. It would be more appropriate to ask what we think is important to research.

I want to end with sharing a special anecdote to demonstrate that there is no deliberate ignorance (or unwillingness) when it comes to the recognition of (Indonesian) anti-colonial violence. One of my friends, Dutch-Indo Max van der Werff, once told me the horrible story of his uncle who got killed in Bandung. We decided to organize a commemoration at Dutch war cemetery Kembang Kuning in Surabaya. Together with a group of young people from the Roode Brug Soerabaia community we put flowers on these Dutch graves. You know what? Many Indonesian media covered this commemoration. Even national television came to Surabaya to cover this. On small scale this shows how beautiful it can be when perspectives are being shared. However, I think that when Max would have approached me in a pedantic way by saying that our so-called heroes killed his uncle, we would probably not have organized a commemoration.

When we really want to cooperate in this investigation, we should consider the prejudices and perspectives of the other. Generalizing and drawing conclusions in advance will block a dialogue. For Indonesians the Independence war is not an isolated event, as well as the Bersiap. Yet not only Indonesian, but also Dutch people have to ask if the image of the other is not colored by the past.

Ady Setyawan (1982) is an Indonesian engineer and amateur historian from Surabaya. In 2010 founded the Roode Brug Soerabaia community, with the idea to make history interesting and accessible for a younger generation. Often reenactments are held in which the struggle against the British and the Dutch are recalled. Also presentations and exhibitions are being organized. 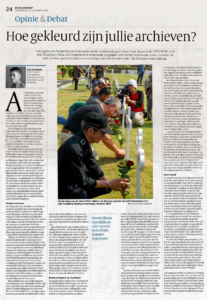 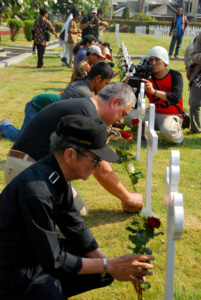