Introduction at public meeting ‘Decolonisation or recolonisation’ in Pakhuis de Zwijger Amsterdam. By Frank van Vree, director of the NIOD and leader of the research program ‘Decolonization, violence and war in Indonesia 1945-1950’

“Tomorrow, it will be exactly a year to the day since we were all last here, in Pakhuis de Zwijger, for the programme to kick-off the research into war and violence in Indonesia in the years following the Japanese occupation and the country’s declaration of independence, more specifically from 17 August 1945 to 1950.

At that gathering last year, we promised that we would not retreat to the safety of our study rooms to then only make the results public four years later in 2021. Instead, we undertook to regularly show our faces at debates, in fora, in the media and at gatherings such as this one. This is because, even though the research is still very much in full swing and, all things considered, we do not yet have a great deal to report in terms of specific results, there is still plenty to discuss, as we will see later on this evening.

By way of an introduction, allow me to attempt to report in brief on what has been done and what has been happening over the last year.

First of all, a lot of hard work has been carried out by the Dutch researchers – around 25 of them in all, including a large number of young people – in archives and libraries both in this country and abroad. All of the subprojects have now started up. However, a start has also been made in Indonesia on research into various aspects of this history, too, looking in particular at specific regions. This work is being carried out by a group of around 15 historians, many of whom, again, are young people.

It is very important to emphasize that the Indonesian project is fully autonomous. The political, social and academic context within which these historians are working requires that they are able to operate in complete freedom. That does not mean that there is no collaboration between us, because there is. To give an example, two joint workshops were held at the Gadjah Mada University in Yogyakarta in the past year, and agreements were made between Dutch and Indonesian researchers regarding the regions and topics to be explored, and about shared edited volumes. But in all other respects, the two research groups function independently of each other. This evening, we will not be speaking for our Indonesian colleagues either, or on behalf of them. Instead, we will wait – along with all of you – until they are ready to make the results of their research public.

Over the last year, we did not, of course, restrict our consultations and debating to interaction with our Indonesian colleagues. On the contrary, we also continued to put our plans through their paces with the help of the Scientific Advisory Committee, and we entered into intensive consultations with the Dutch Social Focus Group, in which large social umbrella organizations, including (to name just two) the Indisch Platform and the Veteranenplatform, are represented. And we entered into discussions with other groups, such as the association of Indonesian students in the Netherlands, and with other involved parties both here and abroad, including researchers whose work can help our programme. One such researcher is Piet Hagen, who has published a book about the waging of five centuries of colonial war in Indonesia, a revealing account of the fundamentally violent character of the system of colonial rule.

And then, of course, we also have the Witnesses and Contemporaries project, which is part of the research programme. Within the framework of this project, a series of interviews and panel discussions have been held, and it is still yielding original material in the form of letters, photos and other information. The Witnesses and Contemporaries project has now started to extend its activities to Indonesia. We will be hearing more about that this evening, too.

We are talking and consulting with a large number of groups, individuals, institutions and parties, and this intensity is a reflection of the huge amount of interest in this research programme. In fact, there is just one party with which we are not talking, and that is the government. It may sound a little feeble to say, but there is no harm in emphasizing that this programme is not research that has been commissioned: on the basis of the proposal to be found on the website, the government decided to award the three institutes grants for research without having any say about how it is carried out or what the findings should be. So, I would like to reiterate: this is independent scientific research, the aim of which is to expose the dynamics (and, in particular, the dynamics of violence) of the events that took place between 1945 and 1950 in a broader historical context, seen from different perspectives, without any preconceived outcome or conclusion.

One of the reasons we need to specifically think for a moment about the political independence of the Dutch research programme and the autonomy of the Indonesian project relates to the public discussions surrounding this research programme, which can sometimes be fierce. The title for the kick-off last year – ‘Overbodig of hard nodig?’, which translates as ‘Superfluous or necessary?’ – already made reference to this, and in the intervening period, the discussions have shown no sign of dying down. We shall see that that is the case this evening, too. Over the past year, there has been a lot of criticism of the research, criticism emanating from various quarters, criticism that was sometimes totally unfounded, but also criticism that forced us to determine our position, that forced us to think about the language we use, and about where we as a programme, but also as individual researchers, stand.

In order to have these discussions, we organized a number of internal afternoon seminars over the last year, focusing on questions that will also come up this evening, starting with matters governed by international law and legal issues. So, this evening we will think about the far-reaching implications of the differing views on the start of Indonesian independence: was it on 17 August 1945, the day on which the Republic of Indonesia was proclaimed – the day the country became de facto independent, as the Dutch Minister of Foreign Affairs wrote in 2005, a fact that he declared ‘politically and morally accepted’ – or when what was termed the ‘transfer of sovereignty’ between the Netherlands and the Republic took place on 27 December 1949?

Those two dates do not represent an unambiguous historical or legal distinction, or an innocuous theoretical difference in perception, but symbolize radically different points of view with far-reaching implications – in terms of the terminology used and more. The term ‘police actions’, for example, is an expression of a purely colonial view: as if it was all about an uprising that had to be suppressed. But the question is whether the term ‘decolonization’ also derives from the same point of view – and whether we would be better advised to speak of a war of colonial reconquest, or of a form of ‘recolonization’, as they do in Indonesia.

We will come back to that this evening, but what it is all about is us resolving to allow various perspectives to speak during this research, that we take them extremely seriously, and that in doing so, we are also willing to subject our own view to closer inspection. Call it a necessary ‘decolonization of history’. But what is certain is that we will need to have these discussions in order to end up with a balanced historiography that covers multiple perspectives. It is for this very reason that the title of one of the subprojects has been changed from Bersiap to Violence, Bersiap and Berdaulat. Transition 1945-1946 – in order to express the fact that during that period of a critical power vacuum in large parts of Indonesia, wide-ranging forms of social and political struggle and violence flared up, and, secondly, that the Dutch experience should not determine our perspective as researchers.

I hope that this evening we will not only be able to make clear that this is a scientific research programme, but also that we, as researchers are very much aware of our historiography not being completed in a vacuum, but that in all respects, starting with our view and the language we use, it is intertwined with the living world, both in Indonesia and in the Netherlands.”
— 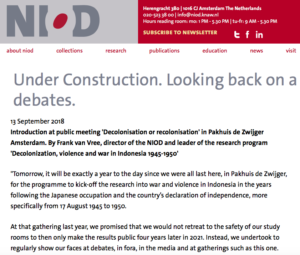 [DISCLAIMER: The views and opinions expressed on this platform are those of the authors and do not necessarily represent the views of Histori Bersama. Our goal is to give insight in the different views and perspectives.]