“A cover-up? That’s too bizarre for words”

Critique regarding the investigation about Indonesia

In an open letter to the Dutch government, academics and activists criticize a large-scale investigation into the decolonization war in Indonesia that is carried out, among others, by the Royal Netherlands Institute of Southeast Asian and Caribbean Studies (KITLV) in Leiden.

The research project ‘Decolonization, violence and war in Indonesia, 1945-1950,’ that is going to take four years, will investigate Dutch violence during the Indonesian war of independence. 126 people signed the letter, including the Leiden professor of Japanology Kasia Cwiertka and assistant professor of Japanese history Ethan Mark. The letter questions the independence of the research, partly because it is carried out by the Netherlands Institute for Military History (NIMH), which is part of the Ministry of Defence.

The government allegedly influenced certain research topics without a fair balance between Dutch and Indonesian researchers, according to the signatories.

The choice for KITLV director and professor of colonial and postcolonial history Gert Oostindie, who, as project leader plans to write the synthesis at the end of the research, is in their eyes not appropriate: “Apart from his role as one of the initiators and managers of the research he is not known to be an expert in Indonesian history. He does not speak the language and his expertise lies in Caribbean history instead.” He also did not sufficiently problematize colonialism.

Oostindie’s reaction is that, although the letter raises some “relevant questions,” the suggestion is made that the research “is going to cover everything up.”

“Of course you have to think about the colonial history, you have to look critically at government agencies, and seriously cooperate with Indonesian colleagues,” he says. “The problem is that this letter presents the research as a cover-up and to me that’s too bizarre for words.” These issues are addressed on the site of the project, he states.

“The critique is that we do not constantly scream that colonialism is wrong. We don’t have an activist approach. We are working on a broad, academic story about what happened. This does not alter the fact that many of us have written very critically about Dutch colonialism.”

He emphasizes that NIMH, although it falls under the Ministry of Defence, is still able to conduct independent research. “The government has not imposed any research topics.”

“An important reason for them to finance the research was the book ‘The Burning Kampongs of General Spoor’ (2016) written by Rémy Limpach who works at the NIMH. That whole book is an indictment against the Dutch armed forces in Indonesia. I don’t see any cover-up there.”

At the moment a team of researchers is being formed in Indonesia. “That’s the job of our Indonesian colleagues, not ours. They are really angry about this. The suggestion is that they are tied by a leash.” About the list of signatories, Oostindie observes: “There are almost no Indonesian professional historians on the list, that says enough.”
— 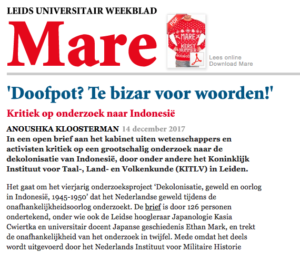