A Soldier at a Typewriter. Alfred Birney’s Novel about Java

The Interpreter from Java by Alfred Birney is a throat-grabbing father-son novel about the colonial past in the Dutch East Indies, which highlights the lasting consequences of a civil war in a penetrating way. ‘Birney’s most important book is more than a contemporary Max Havelaar or a Dutch version of Malaparte’s Kaputt.’

Alfred Birney’s (b. 1951) book De tolk van Java (The Interpreter from Java) makes its readers shiver. It is a novel about a traumatised father, Arend, who murdered dozens of people in Indonesia during the war, a war which for him simply continued within the family he subsequently began in the Netherlands. That war only ends for Arend’s son, the first-person narrator of the novel, with his father’s death. ‘I won’t fight anymore, this is where it ends’, states the final sentence of this rich novel about identity, trauma, racism (in Indonesia, in the Netherlands and in the Dutch army), the Japanese occupation of Indonesia, the bloody battle of the Dutch against Indonesian independence, a father who abuses his children and the boarding-school life which begins for the narrator and the four other children from the family when they are sent away from home. The reader will find no sweet nostalgia here (that is a ‘lie’, writes the father, and the narrator wants nothing to do with it either) or a description of childhood paradise, as is often the case in famous Dutch literature about Indonesia.

Birney has lived with this theme for years, but his novel came along at the right moment: in 2016, the year in which De tolk van Java was published, the Netherlands saw the reopening and deepening of a discussion of war crimes committed by the Dutch army, which was tasked with restoring the colonial administration in Indonesia after 1945, and about the government which did not wish to accept independence. Until then the official version had stated that the main issue had been incidental ‘excesses’ (rape, robbery and plundering), rather than structural war crimes, covered up by the colonial administration, the Dutch government and the military judiciary. After new research it can no longer be denied that the Dutch army was responsible for systematic war crimes. 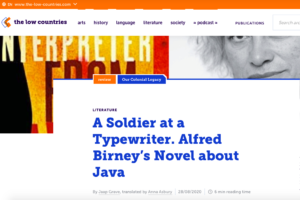 —
On September 3, 2020, the London-based publishing house ‘Head of Zeus‘ released ‘The Interpreter from Java’, translated by David Doherty: