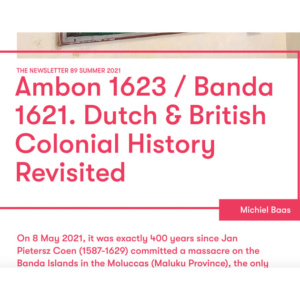 On 8 May 2021, it was exactly 400 years since Jan Pietersz Coen (1587-1629) committed a massacre on the Banda Islands in the Moluccas (Maluku Province), the only place where nutmeg grew at the time. In anticipation of this commemoration, the 1893 statue of Coen in the Dutch city of Hoorn, which dominates the town’s central square (Roode Steen/Red Stone), was again the focus of much anger. In the nationalist-tinged late 19th century, people were looking for heroes from the past. The Aceh War had been raging hopelessly for years. The so-called “glory days” of the Dutch East India Company (VOC) were more than a century behind. As an exemplary figure who spearheaded Dutch entry into Asia, Coen was equated with his robust and determined gaze East. He was deemed to have paved the way for Dutch successes in the Spice Trade, and thus seemed ideally suited to fortify the continued belief in the Dutch colonial enterprise. Even when Coen’s statue was placed on its pedestal, many criticized the glorification of a man with such a blood-soaked legacy. During a large protest near Hoorn’s train station in June 2020, speakers drew attention to persistent discrimination and racism in the Netherlands in a broader sense.  Recent events in the United States – in particular, the increasingly prominent Black Lives Matter movement and the public’s reaction to the murder of George Floyd – were a source of inspiration.

The actions surrounding the image of JP Coen occur at a moment in which the Dutch colonial past and its disastrously brutal activities in the slave trade are increasingly under review. The Rijksmuseum recently opened a large-scale exhibition on slavery. A well-curated book that pays specific attention to the many slave-related objects in its collection has also been published. Related publications often draw a direct line between this violent past and the institutionalized presence of racism in Dutch society. These sorts of historical reckonings can count on strong opposing sentiments: the same day as the aforementioned protest in Hoorn, a pro-Coen counter-demonstration was also held.  Clad in Dutch flags with the VOC logo embroidered on them, a limited group of sympathizers gathered nearby, claiming an emotional bond with ‘their Coen’ and other Dutch colonial figures of an imaginary glorious past. The way in which Dutch colonial history is appropriated and employed in such protests is characterized by rather broad generalizations. Among the pro-Coen protesters, it seemed mainly about the idea that the Netherlands was built on the acquired riches of the Dutch Golden Age. Heroes of yesteryear (e.g., Michiel de Ruijter (1607-1676), Piet Hein (1577-1629), JP Coen) were not to be dismissed as violent conquerors and slave traders. They should continue to be respected for the riches they brought home, the riches that continue to make the Netherlands one of the wealthiest nations on earth. On the other hand, ‘four hundred years of Dutch imperialist rule’ – as Gloria Wekker calls it in White Innocence (2016: 2) – cannot simply be erased. The consequences of such imperialism are still felt.

Read full article on the website of IIAS: https://www.iias.asia/the-newsletter/article/ambon-1623-banda-1621-dutch-british-colonial-history-revisited?fbclid=IwAR0YllMok54aoAdH_T-4hBJSVHEJW-X8ISBPpOlyyacF30SUZsM5P2WY4lc