An Afternoon with the King and Queen of the Netherlands

Just before going to bed, about a month ago, before shutting down my laptop, I opened my email. There might be something interesting or important. There were some new mails in my inbox, including one sent by Cees de Graaff, director of Dutch Culture (network and knowledge organisation for international cultural cooperation). This is an organization working under and supported by the Dutch Ministry of Foreign Affairs and the Ministry of Education and Culture. In the past, I had participated a couple of times in a seminar or symposium organized by Dutch Culture. Were they going to organize another one? 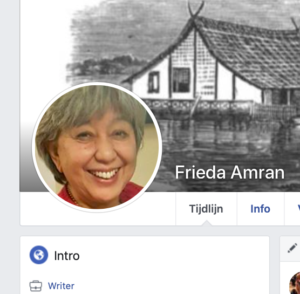 Huh? Was this for real?? I thought that I had misread the email or perhaps, because it was already midnight and I was getting sleepy, I had misunderstood it. I read the email out loud to my husband and son.

“Does this mean that I am invited to a seminar with the King and Queen??” I asked, flabbergasted.

“I have to RSVP,” I said. “But I’ll do that tomorrow. I’m going to check whether this invite is for real. Why would they invite me? It’s probably a hoax or something …”

It was not a hoax. I had really been invited to participate in a closed seminar organized in preparation of the King and Queen’s upcoming visit to Indonesia. Unbelievable. But true.

Of course, I went. And came too early. My husband dropped me off at Rokin, one of the main streets in the centre of Amsterdam. The seminar was held in a cultural centre at the end of the red-light district. After travelling for two hours to get there, I was really in need of the ladies room. I walked rapidly to Nes 45, the cultural centre, the venue of the seminar.

I imagined an American action film. The US President or head of state of another country was coming. The CIA or FBI or whatever US intelligence and security organization were prepared and armed. On several corners of all the tall buildings around the place the VVIP was going to, snipers were ready and aiming their guns towards scumbags—if there were evil persons attempting to disrupt the visit. On the street, a couple—‘husband and wife’—were walking and constantly looking around them while pushing a baby-stroller with a doll in it and guns, under its blankets. They were also prepared to attack and capture the scumbags, if there were any around. If it were in Indonesia, every street vendor selling noodles and meatballs, fried bananas and garbage collectors would be whispering into their hidden microphones, that everything was under control and secure. “There are no scumbags here! Over!”

I saw none of that in Amsterdam. The Nes was quiet. Only me and a woman walking quickly, her head buried in her coat and scarf. Nothing to worry about. I too was walking like her because even though the sun was shining, a cold winter’s wind was blowing and I felt it in my bones.

“You are too early!” said the pretty lady in the building. Inside were around 7 big, burly police agents and some people who seemed to be just hanging around. “You are not allowed in yet. You can better use the toilets in the café next door.”

So, I went to the café next door. Ten past three o’clock. While waiting for the door to open at half past three, I had coffee with some people I knew from KITLV: the brothers, Henk and Nico, Ireen and Taufik.

“You will have to be quiet, Frieda” Nico said. “The audience will not be allowed to ask questions.”

“You are only allowed to come, sit, be quiet and listen …” said Henk.

“That is so weird,” I said, already feeling tormented at the thought of being forbidden to open my mouth. “So, why were we invited then?”

“To fill up the seats,” said Nico.

That made me shut up. My head was filling up with questions. Why was a seminar being held where you were not allowed to ask questions? You couldn’t comment, add to or disagree with whoever was talking. That was so weird. But, OK, I didn’t think I would be able to give any input anyway to prepare the King and Queen for their visit to my country. And, for that matter, what can you tell their Majesties in the space of two hours that would make them more .. (I don’t know more what) during their visit?

The doors opened at 15.30. The guests started to form a line in front of the doors. At another door, journalists bringing cameras with huge lenses were also lining up. I saw some friends, Indonesian and Dutch, queuing up with me: researcher, teachers, professors, writers, artists (poets, theatre, singers), 5-7 people from the Indonesian Embassy (including the Ambassador, the Deputy Chief of Mission and their aides) and my good friends: Ratna, Lea, Tossi, Nur, Hasti.

Ten minutes later, the doors to the seminar hall were opened. It was like a theatre with balconies on its left and right, and chairs arranged going upwards. On the chairs in the front were pieces of paper with ‘Reserved’ written on it. For the important persons among us. I sat in the fifth row. On my right, the director of Bronbeek Museum. On my left, a manager of a Dutch kitchen spices company. I think, the hall was filled with around 200 people from the Dutch business, cultural and educational world.

Four o’clock. King Willem-Alexander and Queen Maxima entered. Everyone stood up. I thought that we would hear the Dutch national anthem and all the Dutch people around me would start singing solemnly. That did not happen. The King and Queen nodded their heads to the audience and sat down.

The seminar was opened by a speech by the Indonesian Ambassador, Pak Puja. I like the ambassador’s style. He is a wise and humoristic man. His speech was short. I noted one thing that he said: “Somebody said ‘God created the world, but the Dutch created the Netherlands’!” The audience laughed.

I thought it was very smart of the Ambassador to please the Dutch by praising the one thing that they were most proud of: their technological expertise in drying the ocean to create their homeland! Just imagine it! God created the ocean and just a bit of land for the Dutch. Of course, that piece of land was not enough for all the people and their animals to stand on. So, the Dutch built dikes, pumped out the ocean and thus gained more land. (Needless to say, that technological expertise was obtained with capital from the spices and natural resource commodities they brought back from the Indonesian archipelago. But, of course, the Ambassador didn’t mention this).

The first topic was ‘From Past to the Future’ with Grace Leksana (PhD candidate Univ Leiden) as one of the speakers. I wrote down one of Grace’s statements. It went something like this: “”A shared future is not based on commonalities, but on differences”. Sharing (something) together is not based on having things in common, but is based on differences (of opinion, meaning etc) on viewing those things. Equality in being different and having differing views/meanings is the basis that is needed to be able to move forward and achieve ‘Indonesia and the Netherlands: A Joint Future’.

Two other speakers interested me, namely Vivian Maretina (a master student at Delft Univ) and Stella Juventia (alumna and researcher at Wageningen Univ). Their talk was presented as an interview. In their respective work, both showed that Dutch-Indonesian cooperation can indeed achieve great things. Thus, achieving the aspired ‘joint future’. To tell you the truth, after hearing Grace, Vivian and Stella, my heart swelled in pride. Indonesia needs more people from the younger generation like them: intelligent, confident, unpretentious and enthusiastic to build and develop their country and nation.

However, I had an uneasy feeling in my heart. I was unsatisfied. My discontent became worse hearing Viktorien van Hulst (director Theatre Festival Boulevard in Den Bosch) talk. She said, 2020 is an important year because it is a year that underlines shared history. In 2020, on August 15th, the Netherlands celebrates 75 years of freedom from German occupation (in the homeland) and freedom from Japanese occupation in the Indonesian archipelago. She failed to mention that at the same time, while the Dutch were being freed from Japanese oppression, the Indonesians were being attacked because they dared to proclaim their independence. She failed to mention that the year 2020 was also important for Indonesia because on August 17th 2020, Indonesia will be celebrating 75 years of independence. She did not mention those facts. Not one word.

I went home disappointed. Having the chance to meet the King and Queen of the Netherlands in person, nobody (except Gert Oostindie) took the opportunity to remind their Majesties of the fact that the INDEPENDENCE OF INDONESIA WAS ON AUGUST 17TH 1945!

I, also, did not do that! My disappointment was especially directed towards myself. Why had I not taken the opportunity of that midday meeting to poke them, jab them or do something, anything, to attract their attention so that I could say to them: “O, King! O, Queen! It is time to be courageous and wise. Acknowledge and accept this fact. Indonesia claimed its independence on the 17th of August 1945.”

How is equality possible, as Grace elucidated in her talk, if there is no acknowledgment and acceptance of the core of nationhood, the independence of Indonesia?
— 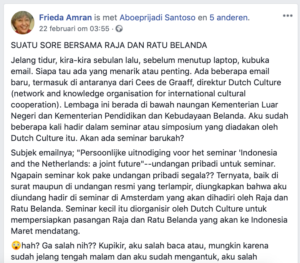