Apologies for the Indies—So Why No Research?

As champion of human rights, above all the Netherlands should research its own war crimes, contends Gert Oostindie

The bloody struggle for the Netherlands Indies is hardly a part of our collective national memory—thus contended journalist Anne-Lot Hoek last Saturday in the NRC’s opinion pages. [She claims that] historical institutions have insufficiently illuminated the episode.

That Dutch soldiers committed war crimes was indeed long obscured, but has since been acknowledged, by the Dutch government as well. Apologies and “damages” have been offered—compelled by lawsuits, but still.

And yes, Dutch historical institutions have not lead the way in this research—those [who did] have above all been veterans, journalists, and lawyers. Yet the fact remains that contrary to what Hoek suggests, historians too have published a lot about this war—including about “excessive violence.” Judging (or condemning) after the fact is not the point. It’s rather about [posing] more precise questions: How often did which parts of the Dutch armed forces commit war crimes, in what context was this encouraged, tolerated and/or covered up afterwards by the higher-ups?

Research may undermine the founding myth of the Republic of Indonesia

To answer these broader questions requires unbiased research. This was also the motivation behind the call for [for such research] three years ago by the Royal Netherlands Institute of Southeast Asian and Caribbean Studies (KITLV), the NIOD, and the Netherlands Institute for Military History (NIMH). Hoek finds this belated, but more important is the question why, despite broad support, the government continues to refuse funding. To keep the national coat of arms clean? Doubtful, apologies have already been made. Veteran’s protests? No, because their organizations are the ones hoping for a more nuanced image. It may sound crazy, but it is Jakarta that keeps saying that we need to look forward. That [may] seem noble, but that’s not what it is: There was not only a decolonization war being fought, but also a revolution going on in which all sorts of Indonesian groups battled one another with brute force. Research can undermine the founding myth of the Republic of Indonesia—[that of a] “unified heroic People who kicked out the colonizer as one.” Sad that our government continues to hide behind Jakarta in refusing to support broad research into our military conduct. Thus does Indonesia determine our national research agenda.

Research is needed, but that [alone] will not be enough. It is about processing, debate, acknowledgement. The government has already taken one step in that direction: The implicit acknowledgement that the responsibility lay primarily with the political and military leadership, not with the soldiers. We now await the second step—the order for a broad research [project]. It is not clear whether this will lead to an “objective, over-arching and shared narrative” as Hoek hopes. But the Netherlands would gain legitimacy as a champion of human rights and the punishment of war crimes. That’s not nothing: [it is about seeing] the speck in the other’s eye while disregarding the beam in one’s own [an old Dutch proverb referring to criticizing others but not being open to self-criticism; being inconsistent in one’s criticism].

Gert Oostindie is director of the Royal Netherlands Institute of Southeast Asian and Caribbean Studies and Professor of History in Leiden.
— 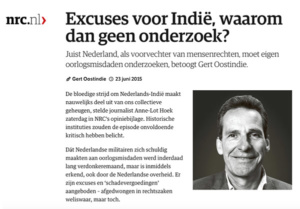