“August 15 means nothing to us Indonesians”

The perspective at the Dutch Indies commemoration is still colonial, the Indonesian perspective is being ignored, argues Jeffry Pondaag.

Again, on 15 August the so-called “Indië-Herdenking” (Dutch East Indies Commemoration) is being held, remembering the capitulation of Japan [in 1945]. What bothers me is that, during this commemoration, the focus is not on the more than 70 million native population that lived in the Dutch East Indies in 1945. Even though the [commemoration-day] organization formally says that everyone is commemorated, the narrative during that commemoration focuses on the “Indisch gelijkgestelden” (those legally assimilated) and the white Dutch, the Belandas (the so-called Totoks) as victims of the Japanese occupation. These people forget that they themselves were part of an occupying power.

August 15 means nothing to us Indonesians. From an Indonesian perspective, the Dutch occupation came to an end with the invasion of Japan in 1942. We are celebrating our Independence Day on 17 August, when our first President Sukarno declared the independence in 1945.

What bothers me as an Indonesian is that the Netherlands continues to see the date of 27 December 1949 as the date that we became independent. This is not only insulting, it is also in conflict with our constitution that is based on the date of 1945. In my opinion, this means that the Dutch embassy in Jakarta is illegal. Proof that the Netherlands still holds on to 1949 are the legal claims that I submit with my foundation the Dutch Honorary Debts Committee (K.U.K.B.). The court in The Hague speaks consistently of “Dutch subjects” when they’re talking about the Indonesian victims of Dutch war crimes in the period 1945-1949. While, logically, if the Dutch State legally recognized 1945, the court should speak of “Indonesians” [when talking about the period of 1945-1949].

It is about time to clearly explain this. Dutch people need to know what happened. How is it possible to commemorate the end of the Second World War on 15 August, while the Netherlands continued as occupier of Indonesia after 1945?

Although they knew what it was like to be occupied by Germans and Japanese, the Belandas (the Dutch) did not give up after 1945. While their own country was still in ruins, they (again) committed war crimes and committed horrible human rights violations in Indonesia.

Next year, just like in 1995, a Dutch royal visit to Indonesia is scheduled. My message to Wilhelmina’s great-grandson Willem-Alexander: you can’t help it that your ancestors were colonial, but you must know that the money they accumulated over the centuries is blood money. It is up to you how you want to deal with such a heavy past. But if you travel to my country in August 2020, then at least offer the Indonesian people general apologies. And arrive on time, since your mother was four days too late in 1995. And go and visit the grave of our first President Sukarno to honor him.
— 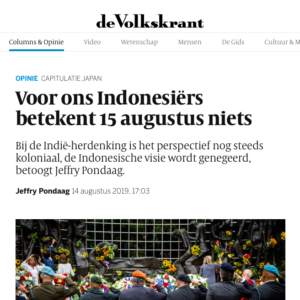