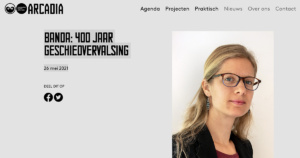 The Banda islands are a group of small, volcanic islands in the Moluccas and for a long time the only region in the world where nutmeg and mace were produced. In the centuries before the Europeans arrived in the area, the Bandanese traded with all kinds of other peoples from India, Yemen, Persia, Oman, Egypt, Turkey, Bengal, Java, Japan and China.

In the 16th century, the Portuguese tried to settle on Banda to impose their will on the people and take over the trade. The Bandanese did not accept this invasion and managed to chase away the Portuguese, who from then on obtained nutmeg via traders on Java.

The Dutch VOC, the colonial ‘trading company’, still wanted a monopoly on nutmeg and mace. The profit margins were enourmous at the time, these spices had a bigger market value than oil now. In 1609 Admiral Pieter Willemsz Verhoeff occupied the island of Banda Neira and started building a fortress. The population did not accept this invasion either and they ambushed Verhoeff and killed him.

The latter escalation culminated in a years-long, bloody and unequal terror campaign by the Dutch colonizers against the Bandanese. This history is central to the book: ‘Banda. The Genocide of Jan Pieterszoon Coen’ by historian Marjolein van Pagee.

As a VOC-commander, Coen ordered an expedition in 1621 to the main island of Banda Besar (referred to as Lontor in Dutch sources) in order to finish the occupation and to realize a monopoly once and for all. Thousands of people were killed, 47 leaders brutally murdered, some of the survivors enslaved and others displaced. In short: a very black page in a twenty-year history of ethnic cleansing. Genocide.

Marjolein van Pagee: “Like many historians before me, my assumption was that roughly 14,000 of the 15,000 Bandanese were murdered on his behalf and that those who survived the genocide were integrated into other communities.

Until I came across Lukas Eleuwarin, Marcel Matulessy and Ridhwan Ohorella. They are descendants of Bandanese who had already left the islands before the genocide took place. Their ancestors already saw what was coming and made the well thought out decision to leave their homes before they would end up as victims of the Dutch as well.

So there is something like a Bandanese diaspora. These Bandanese left the islands to safeguard their language, their history and their cultural identity. They carried the so-called ‘Buka Tembaga (copper books) with them. These books describe not only what happened in 1621, but they also include the Bandanese history of the centuries before that. The most important part of their community ended up on the Kei Islands, another small archipelago in the Moluccas.

This knowledge was blowing my mind, it was the opposite of what had been believed to be true for 400 years. It turned the story line of the book that I was writing suddenly upside down.”

So many people before you have studied this history, how come that you found out only now?

Marjolein: “The colonial story has always dominated on how people here think what happened [in 1621]. Dutch historians did write about the genocide, but usually only as a small story within a larger context, just half a page or a single paragraph, which means that a lot of details are not covered.

Since then, other people have been living on Banda for centuries. They are also called Bandanese and will feel that way. But their origin is different. Their ancestors ended up on the islands, whether or not under pressure and after the genocide. So there are two Banda identities. So far, one identity has been ignored in the stories.”

How was the decision made to commit genocide, how did you find out about it?

Marjolein: “It wasn’t a sudden thing. The final blow of 1621 was preceded by a 20 years terror campaign. In letters and correspondence, Coen and other administrators were speculation on what to do with the Bandanese. The plan to kill them all was already discussed prior to 1621. And if they weren’t talking about killing everyone, they were talking about killing the Bandanese leaders.”

How was it to read this back in those old documents?

Marjolein: “It is very cold and horrible when you read that. The moral benchmark in the West always seems to be the Holocaust. As if that was the most evil thing that ever happened, the massacre of a people. But that has also happened in the hundreds of years of colonial history and it were Dutch people who carried it out. That is why I explicitly compare the VOC with the Nazis. Precisely also to show that genocide is not limited to just the Second World War.”

In the book you get angry, is that possible, as a historian to show so much emotion?

Marjolein: “As a historian you are also a human being of flesh and blood. Only reproducing facts, without applying ethics, is just as bad as the genocide itself. Even if you don’t say anything about the ethical interpretation of a story, you are still telling something. It is precisely our job as historians to speak out, we have the time to thoroughly study topics for which most people do not have time or knowledge.

It all starts with the choice of words. Many historians write that the VOC ‘traded’ in Asia. It wasn’t, it was extortion, there was no voluntary exchange of goods, services and money based on equality.

There is only one perspective in this matter: the Dutch ruler tried to exterminate a people and then for 400 years pretending that the people were no longer there. Until I started researching this, I also reproduced this narrative, so it is quite possible that my fellow historians are only now hearing about the surviving Bandanese community for the first time. I do think that they can no longer ignore this fact and also that they should recognize it wholeheartedly for what it is: falsification of history and erasure of people. If they don’t, then I blame them very much, because then they are knowingly guilty of falsifying history.”
—

Colonial Netherlands was itself a fascist occupier – Trouw

Filmmakers have a dialogue with Banda Ely – Antara News