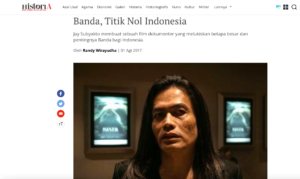 Who doesn’t know Banda? Since thousands of years ago, this collection of islands in the eastern part of the archipelago has been the centre for spice, and has often been visited by traders from China, Arabia, India and Persia. By the 16th century, Banda started to become a contested area amongst European colonial powers.

Cloves and nutmeg made Banda highly sought after. The Portuguese were the first foreign nation to set foot on the islands, followed by the Dutch and British. Since then, the dominance of Arab and Chinese traders was displaced by Europeans.

Since the Europeans reached Banda, a number of economic and social changes occurred in trading activities. Furthermore, tragedies occurred, such as the mass massacre carried out by Governor General Jan Pieterszoon Coen during the heyday of the VOC (Dutch East India Company).

In the VOC era, a monopoly over cloves and nutmeg was established. A system of slavery was implemented. Changes in social life also occurred after the Dutch brought in many slaves from other regions in the archipelago.

European nations competed with each other. In fact, the British traded Run Island, a small island that became the centre for nutmeg, with Manhattan island, which was controlled by the Dutch as one of the terms of the peace agreement in the Treaty of Breda on July 31, 1667.

As time went on, the demand for nutmeg declined. Banda was then used by the Dutch East Indies government as a dumping ground for dissidents. A number of figures such as Cipto Mangunkusumo, Sutan Sjahrir, Mohammad Hatta and Iwa Kusuma Sumantri were exiled here.

Like in the other regions of the Dutch East Indies, Banda became a part of the Republic of Indonesia after the proclamation of August 17, 1945. Several nutmeg plantations were nationalised. However, due to severe mismanagement, this led to no improvement in the economic situation of the nutmeg farmers.

Banda’s dark history during the era of Jan Pieterzoon Coen appeared to repeat itself in 1999, when the riots and horizontal conflicts occurring in Ambon spread there.

Alongside the 350-year anniversary of the Breda Agreement, Banda aspires to rise up. It wishes to not only develop its tourism sector, which promotes the beauty of its marine nature, but also its rich historical heritage.

These details about Banda were summarised by director Jay Subyakto in a documentary called Banda: The Dark Forgotten Trail. In his first film after a 17-year absence, Jay wishes to inform Indonesians of Banda’s very important, but seemingly forgotten history.

“To me, history is important. If we forget the past, we will not be able to succeed in the future. Banda is now left behind and forgotten by its country, despite the fact that Banda is Indonesia’s point zero,” Jay Subyakto said to Historia during his film’s premiere gala at Epicentrum XXI, South Jakarta, on Monday (31/7/2017).

“Because Mohammad Hatta is my uncle, I know his personal letters while he was in Banda. He also often told me stories about Banda before he died on March 14, 1980,” Jay said.

This documentary, complete with animated scenes and interviews with historian Wim Manuhutu, Usman Thaleb and a number of Bandanese people, will be shown simultaneously at several cinemas on August 3, 2017.

“Hopefully this film can serve as a window to better understand the history of our nation. Hopefully it can also inspire and raise our spirits as a huge country,” producer Sheila Timothy said during her speech ahead of the premiere gala.
—
See also: