A watery grave for more than 2,300 soldiers

“In the moonlight we saw our good old ‘Java,’ with its bow up, disappearing into the waves,” remembers Jan Beckering Vinckers about the destruction of the ‘Java’. In 1942 he was Lieutenant Commander on this ship. Shortly before the HMS ‘Java’ disappeared below the surface of the water, he and other officers helped about three hundred people get off the ship directly into the water. With a small team we stayed behind to throw floating objects to them. When the slope became too steep for us to stand on, the commander said: “Let’s leave the ship as well”.

The Java sinks, just like the ‘Kortenaer’ and ‘De Ruyter’, two other ships of the Dutch fleet. In the television series De Bezetting [The Occupation] (1962) two eyewitnesses talk about the final hours of the Battle of the Java Sea. They survived, but about 2,300 others did not. These people found their watery grave amongst the ship’s wrecks. These wrecks, as now becomes clear after almost 75 years, have largely disappeared from the ocean floor.

It seems a smart move at first: The United States, Britain, the Netherlands and Australia stop the trade of militarily useful items, like steal and oil, with Japan. In doing so the countries try to end Japanese’s aggression in Asia. However, it encourages them to capture even more Asian countries. Japan itself has no natural oil resources and focuses on countries that do, such as the Dutch East Indies.

The Japanese fear that an attack on the colonies of the Allies will turn into a war with the United States, therefore the Japanese empire decides to attack the American fleet first, in Pearl Harbor on December 7, 1941. After this attack the Allies increasingly become aware that the islands surrounding the Java Sea are in danger.

After the capitulation of Thailand, Hong Kong and the occupation of two Indonesian islands, allied countries join forces on January 15, 1942. Separately they are too weak to stop the Japanese invasion.

Four countries form a fleet with the remaining warships under the name ABDACOM American-British-Dutch-Australian-Command. The Dutch Rear Admiral Karel Doorman is in charge of fourteen vessels and responsible for the defense of the Javanese island.

In the beginning of 1942 Doorman’s ships are patrolling the Java Sea. For sure that the Japanese fleet is on its way to Java, however it is unclear to the Rear Admiral where these ships sail exactly or when to expect a confrontation. The patrols are taking its toll on the crew. The lack of sleep of the military is troubling when Doorman finally catches sight of the Japanese ships in the afternoon of February 27.

The Battle of the Java Sea

First Karel Doorman decides to sail closer to the Japanese warships before giving the command to attack, because the guns cannot yet reach the ships. It turns out that during the battle not only the fatigue, but also the communication is problematic. The different nationalities have not been trained to work together, e.g. not all Dutch officers speak English and the ships are using different radio frequencies. In contrast, the well-organized Japanese fleet receives additional support from aircrafts as well.

The Kortenaer is the first to drown. In the TV-documentary ‘De Bezetting’ the ship commander says that even before the Battle of the Java Sea, the ship was already heavily damaged and therefore unreliable. “Nevertheless we sailed straight towards the Japanese”, he says.

After a hit by a Japanese torpedo at 17:15 hour the ship breaks in two. The bow and the stern snap towards each other making the ‘Kortenaer’ sink rapidly. At 17:30 the ship vanished. The British HMS ‘Jupiter’ hits a (presumably Dutch) mine and also disappears under the water. Doorman is forced to temporarily withdraw the remaining ships that already suffered major damage.

Under the cover of the night Doorman strikes again. By now the Japanese were superior in terms of ships and more importantly: they are well trained in fighting in the dark. Within a short time, both the HMS ‘Java’ as well as Doorman’s ship HMS ‘De Ruyter’ are hit by a torpedo-boat destroyer.

The decision to attack again turns the evening of November 27, into a fateful one. About 2,300 soldiers, including 915 Dutch, get buried at sea. The words Karel Doorman yelled during the attack:   “All ships, follow me!”, immortalize him. Especially the romantic version “I am attacking, follow me!” becomes a well-known phrase and several ships are named after the Admiral.

In 2012, seventy years after the battle, a memorial takes place at the Kloosterkerk [Cloister Church] in The Hague. Vice admiral and Commander of the [Royal Netherlands] Navy, Matthieu Borsboom, is giving a speech and announces that another Navy ship will be named after Karel Doorman. One of Doorman’s sons also speaks during the memorial.

In the context of the commemoration, maritime historian Anita Van Dissel and the 91-year-old Henk Hinsbeeck, a survivor of the Battle of the Java Sea, are featured on the radio program OVT. Hinsbeeck was a young electrician on board of HMS ‘Kortenaer’. Even before replacing any light bulbs, things already went wrong: “When the ship got hit, an announcement said shortly ‘all hands overboard’ after which we could swim to the lifeboats”, he recalls. 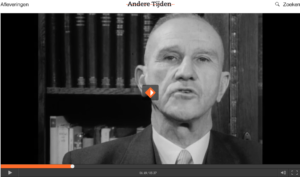