After all admit that our project overseas was wrong

Colonial history, the black pages of our past in the Dutch East-Indies should get a place in our collective memory.

I’m the child of a camp child and grandchild of a colonial. My father survived the Japanese camp and the Bersiap, the violence of Indonesian youngsters. My grandfather, who was superintendent of the police in the Dutch East Indies, died in the camp. Who should I be loyal to? Of course to my father who was imprisoned for 3.5 years in a camp by the Japanese occupying forces.

But how am I supposed to have empathy for my grandfather who was part of a regime that exploited other people and robbed resources? I didn’t find an answer in the lessons, which should be learned from our colonial history, because there is no collective vision.

Therefore, I started to investigate the role and the ideas of my grandfather and his family in the Dutch East Indies, a ‘petite histoire’ as an illustration for the history of the Dutch-East Indies. As camp victims the family brought stories of internment, starvation and murder by the Japanese to the Netherlands.

As Bersiap survivors they colored our view on the Indonesian freedom fighters through their testimonies about the period in which these young people attacked weakened Dutch women and children in the camps. Along with the Dutch veterans of the police actions and their silence about war crimes they determine the debate and they created a tunnel vision of the historical legacy.

Around 1800 the Dutch state took over the contents of the Dutch East Indies from the aggressive multinational that had its own army and navy, the VOC, the Dutch East India Company, which had gone bankrupt by mismanagement and corruption. A company which was already two centuries heartily supported by the motherland; this is how our country changed into an economic project, by which our country thought it was superior.

Settlers as my grandfather operated within the framework that the colonial government had set up. He had to keep order along with 1,500 other inspectors in an archipelago of 60 million people. A ‘native’ corps of around 35,000 agents backed up this white pyramid.

My grandfather was part of a new agile police unit, the field police, which was specifically aimed to identify nationalist uprisings as quickly as possible in order to suppress these. He used economically dependent Indonesian officers who lived with their families in poor conditions on the barrack ground (where my grandfather had his villa.)

My grandparents represented positions for which I am ashamed of now. There is a growing need for reflection among third-generation Dutch-East Indies descendants about our part in the history of Indonesia. They are supported by several journalists who have tracked down veterans who confessed, tormented by a guilty conscience, about war crimes committed during the ‘Police Actions.’

Related is the call for a large national historical research, including the Institute for War Documentation NIOD. This should also result in a better description in the schoolbooks of our own history. In a few paragraphs about the declaration of Indonesian independence in 1945, students can read that independence was proclaimed by Indonesian “collaborators Hatta and Sukarno.” My research shows that the police of the Dutch-East Indies worked several months under the Japanese regime by orders of the colonial government.

There’s also a legal attack against limitation of war crimes: the Committee of Dutch Debts of Honour (KUKB) and lawyer Liesbeth Zegveld won three lawsuits against the Dutch State and victims received compensation for their relatives who were summarily executed by Dutch soldiers.

All of these groups will continue to point out that Indonesia is an open wound until the government takes its responsibility. A whole-hearted recognition by our government of our despicable role as colonial power in Indonesia and apologies would be a first step. Furthermore there should be an international (independent) investigation to war crimes in a truth commission, modeled as in South Africa.

When I traveled with my father to Jakarta and visited the grave of my grandfather at the war cemetery Menteng Pulo and saw all those strictly symmetrical rows of wooden crosses, I suddenly understood that there is no paradox between this gentle man and his participation in an occupying power. Only here I understood that performing his tasks were just a sense of duty for him and that his actions were determined by the government.

Therefore, it is also important for the families and the veterans that the Prime minister, and then the King declare that our project overseas was wrong and that the hundreds of thousands of settlers were only loyal subjects. Maybe in that way I can gain respect and compassion for my grandfather again.

Now, 70 years after independence, it is about time to learn our lessons about the Dutch East Indies and set our standards. 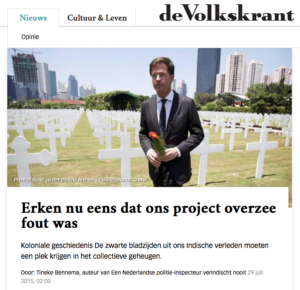