‘Not all Dutch are bad’

Thousands of Indonesians dressed up as colonials. Why do they choose for the role of their former oppressors?

Every Sunday Prakoso wakes up very early. On the wall of his bedroom hangs the suit he wants to wear that day. Sometimes he chooses the suit of a plantation manager, another time he goes as Dutch student. Prakoso is sixteenand wants to become president of Indonesia. But his interest lies not in modern politics, but in the Dutch history of his country. In his room a sea chest containing a Dutch rifle, a collection of pith helmets and a random collection of Dutchbooks; he cannot speak the language. At half past five, he jumps on his Dutch Fongers bike and goes to PlazaIndonesia, the huge square around which the modern city of Jakarta is built. Around the Square every Sunday morning Indonesians gather wearing tropical suits, KNIL uniforms and ladies dresses. The antique bicycle is the shared interest, but it is more than that. “It is a reminder of the time that has brought us civilization,” says Prakoso. “Not only bicycles, but also laws, bureaucracy. I think many people do not realize because of the struggle for Independence that the colonial times have also been positive.” 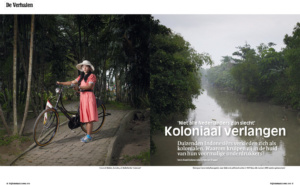 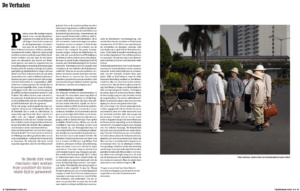 Whoever you ask, everyone gives an almost nostalgic explanation to disguise. “Everything from colonial times is strong and unbreakable.” saiys Yanto (58). “But,” he says, “we also want to safe our heritage. This history is alsoours.” On his chest he wears medals of many history clubs with thousands of members who every Sunday morning dothe same in other cities of Indonesia.

But were the Dutch not doing bad things during the colonial time here? “Until the fall of Suharto in 1998 we only gothistory lessons about ancient kingdoms,” explains Ady Setiawan (30) in Surabaya. “The colonial period was moreover skipped from the history classes, like it didn’t last for 350 years. Only after the fall of Suharto regime we were free to organize ourselves again and tell our own history.” Ady is one of the pioneers of the Roode Brug Community, named after the place where the Dutch and British got stuck by the Indonesian freedom fighters.

When they gather the olden days revive. A group of men and women in Dutch military suits standing in the shadow of the trees in the city park. A big broad shoulderd boy, dressed as a Dutch soldier, introduces himself as RaymondWesterling and put a small Indonesian freedom fighter down to the ground. In his right hand he has a knife, with his knees he forces the body beneath him.”
Some find it strange that my friends and I dress up as Dutch,” says Ady. “But if we do not dress up, people do not recognize us. It is through our uniform they come to see us. Then automatically we create a conversation about our history. Not about the national history as the government dictates, but how it really had been.”

“I think not many people know how positive the colonial period had been.”

The colonial past is inescapable in Indonesia. The city centers are still full of villas, palaces, theaters and government buildings  from the Dutch period. But this heritage is under pressure since (together with the new freedom after 1998)the economy is growing. Large hotels and companies, investors discover the city centers. In every major city lovers of colonial architecture therefore unite in heritage-communities such as Medan Heritage Trust on the western island of Sumatra.
Debby, one of the volunteers of the foundation, walks in front of her visitors to the Plantation Hospital, former Hotel De Boer and colonial residential areas. She points to the materials which were used: the best wood and the strongestDeli clay. “The colonial architecture can teach us a lot about how to build in this climate,” says Debby. “Many modern buildings have air conditioning, but during the wet season they also blow the rain inside.” A moment later she is raged about a construction pit along the way. “Less than a year ago here were two beautiful villas,” she says, “Soon it will be a modern hotel.”
The economic prosperity in Indonesia affects the colonial city centers. “Corruption,” says Debby. “Legally everything seems well organized, in practice everything is possible.”

She enters Thong Thong Ho building with a beautiful ceiling of stained glass. “I want to make a business center for young creative people,” says Debby. “With coffee bars, a bookstore.” It could be a brilliant idea. In more and more cities coffee houses and restaurants appear in Dutch retro design with antique furniture and Dutch menus.
The H.E.M.A. is a success formula that sells croquettes and hotchpotch. Every Saturday you can go on a picture inVolendam costume. Admired Debby looks up at the multicolored ceiling. “Our past gives us something special. If we can distinguish ourselves with something: it is our colonial architecture.” 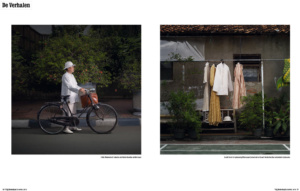 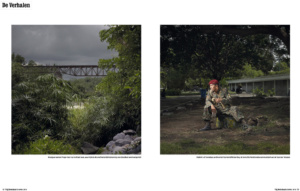 In this way the colonial history provides a new identity of modern Indonesia. In this story it seems that for the dark side of the colonial past there is almost no place. Even in South Sulawesi, where the real Raymond Westerling traveled and massacred people, it seems to relativize this side of the past. “Not all Dutch are bad,” says Andi Monji from Suppa, where Dutch in 1947 “purged” the area. “Even when you met the Dutch during the war, they could be nice guys. Now it’s over, it’s history. If people want to dress up in colonial suit, we just show that we had been colonized before.”

The question is whether the new generation of Indonesians who were raised during Suharto’s dictatorship, look back with false romanticism to the colonial past. Artist Titarubi asked herself the same question. In a large warehouse in Yogyakarta she puts the finishing touch to the Indonesian submission for the Art Biennale in Venice, a project in which she questions the way of dealing with the past. “The Dutch period is symbol of modernity for me,” says Titarubi. “Feminism, art, technology, it’s all brought by the Dutch. We should cherish that. At the same time, everything what is wrong in Indonesia began already in the colonial times. For example how the plantations function: with cheap labor and under the protection of the army. Corruption isinstitutionalized by the Dutch. Unfortunately, many people only look back with nostalgia to the olden days. They consider the colonial past as something beautiful, something exotic. But we should not forget the negative side of it.”
Original PDF: