The Rijksmuseum in Amsterdam was sued by Indonesians for using the racist term bersiap in a recent exhibition. It is through court cases that Indonesian rights activists have changed the debate over the Dutch colonial past and exposed colonial crimes. And it is in court again that lasting colonial ideas are being fought, tells scholar Marjolein van Pagee, despite last Thursday’s January 5 decision of the Amsterdam’s Court of Appeal that “the term bersiap does not automatically contain negative conclusions about Indonesians”. 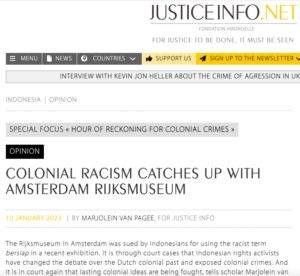 On October 13th, 2022, an Indonesian man, wearing a golden suit with a black velvet peci (Indonesian traditional cap), stood in front of the Amsterdam Court of Appeal. Before him, a black leather case with a sticker that read: ‘Black Pete is racist.’ [referring to the black companion of Saint Nicholas in Dutch folklore] He looked the judges straight in the eye when he spoke: ‘I am delighted to stand here in front of indigenous, white native counselors.’ It is unknown whether they were indeed indigenous to the Dutch land, but that was not the point. By reversing the use of the word inlanders (natives) to address representatives of the Dutch legal system, after all a white institution of power, he reminded them of the condescending way that Indonesians were treated during colonial times. For Indonesians, the word ‘inlander’ is a slur, perhaps similar to what the n-word means to people of African descent. He continued to explain that within the 350 years of Dutch colonial rule, Indonesians were never given the legal rights that he now got.