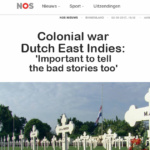 Today, at the National Indies Monument in Roermond we commemorate the Dutch soldiers who died during the battle in the Dutch East Indies and New Guinea between 1945 and 1962.

Since 1988, the commemoration has taken place every first Saturday in September in the city park of Hattem, where there are monuments to commemorate various military missions, including those in the Dutch East Indies. Seventy years ago, the first so-called police action took place there.

The Netherlands and Indonesia have a different version of the same history. For example, the Netherlands uses the term police action, a disguise for a violent war with 100,000 Indonesian victims. Indonesia speaks of Agresi Militer: military aggression.

This month a major study will start in which Dutch and Indonesian historians will work together to rewrite the stories in the history books together. It is conducted by the Netherlands Institute for Military History (NIHM), The Royal Netherlands Institute of Southeast Asian and Caribbean Studies (KITLV), and the NIOD, Institute for War, Holocaust and Genocide Studies. The government has pledged four million euros for the investigation.

The Indonesian historian Bonnie Triyana thinks it is good that this research is there, because it provides more insight into both Dutch and Indonesian perspectives, making it less black and white.

“In Indonesia, the independence struggle is told as a glorious and heroic story,” Triyana said in conversation with NOS correspondent Michel Maas. “In the history lessons of this period, the number of deaths is of minor significance compared to the result. It is simply the price we had to pay as a nation for our independence.”

One of the topics that, according to Triyana, needs to be discussed more in his own country, is the topic of the Bersiap, the violent period that followed a few months after the capitulation of Japan.

The Indonesian soldiers, fueled by nationalist feelings, killed thousands of Dutch, Chinese and Indo people between October 1945 and early 1946 and all those affiliated with the foreign authority. A large proportion of the victims were children, women and elderly people.

“It is important that we tell this side of the story too,” says the editor of the history magazine Historia. “These victims were not soldiers, they were not supposed to die in this war.”

If it was the younger generation of historians in Indonesia to decide, they would open up the Indonesian archives too. This also became apparent recently in Jakarta during the presentation of the book Soldaat in Indonesië 1945-1950 (Soldier in Indonesia 1945-1950) by the Dutch historian Gert Oostindie.

Those Indonesian present reacted positively to the book, which is full of witness statements that indicate that the Netherlands used structural violence, but they also sympathized with the often insufficiently trained, very young Dutch soldiers.

Triyana was present at the presentation. When a professor wondered aloud why no one in Indonesia wrote such a book full of testimonies and documents from the Indonesian archive, he spontaneously exclaimed: “I want to do that!”

“Now is the right time to reopen the archives, whether the outcome is black or white. By confronting the past, we also learn how to deal with it,” said Triyana.
—

Pebble in your shoe – NRC