In 1945 Indonesia declared its independence from the Netherlands. A year later Netherlands sent 100,000 troops. A bloody independence war followed. After seventy years, the question remains: how to commemorate the colonial past?

How could the Dutch think to have the right to claim an area of 18,000 kilometres away as Dutch possession? As an Indonesian, living in the Netherlands since 1969, I never really understood. I’m not a historian, but just a simple factory worker. Ever since my childhood I had special interest in history. In 2005 leading to the founding of the Committee Dutch Debts of Honour, better known as the K.U.K.B. foundation. The purpose of this foundation is to give a face to the victims of Dutch colonialism; besides Indonesian victims the foundation also represents Dutch victims who refused military order.

It was a historical moment when Indonesian widows from the West Javanese village Rawagede sued the Dutch State in 2008. After the pleading of human rights lawyer Liesbeth Zegveld, the court ruled in 2011 that the Netherlands was guilty. The government had little choice and ordered ‘office-boy’ Tjeerd de Zwaan (the former Dutch ambassador to Indonesia) to travel to Rawagede. On behalf of the State, he had to apologize to the elderly widows whose husbands were executed in 1947.

The current Dutch prime minister says he wants to focus on the future. On trade mission to Indonesia Prime Minister Rutte refused to talk about the past. Let alone his unwillingness to make apologies for the war as a whole or Dutch colonialism in general. This was the case in November 2013 and it seems that his next business trip, scheduled in November this year, won’t be any different. Dutch politicians and diplomats have the idea that it is better for the Dutch-Indonesian relations to not talk about the colonial past.

They forget that, even though the average Dutchman does hardly know anything about what happened in Indonesia, the Netherlands is seen in Indonesia as former colonial aggressor. You can say that the Dutch are for Indonesians what the Germans are for the Dutch. It is a misconception when Dutch politicians think they can build a relationship of trust with their former colony without naming the history and centuries of exploitation. At the same time they have the guts to criticize the Indonesian government on human rights violations, while they like to forget their own human rights violations.

And not just “forget”: until today the Netherlands is guilty of historical falsification. In my view, three historical institutes are partly responsible: The Dutch Institute for War Documentation (NIOD), the Dutch Institute for Military History (NIMH) and the Royal (Colonial) Institute of Southeast Asian and Caribbean Studies (KITLV.) They should teach the Dutch people. Their main task as history experts is to map the Dutch past. Yet an immigrant, the Swiss researcher Remy Limpach, is needed to conclude that Dutch war crimes in the Dutch East Indies were widespread. The conclusion of his thesis is that the Dutch violence was structural. When a foreigner is needed to correct the Dutch historical falsification, it means that the three institutions – funded by taxpayers’ money – were sleeping all those years. According to me, they can better close their doors.

Weeping crocodile tears the Dutch government apologized to the widows of Rawagede and South Sulawesi, while later they decided to appeal in the court case against the KNIL (the Dutch colonial army) about the raping of an Indonesian woman in 1947. Meanwhile, the victims received compensation. The state advocate also questions the legal validity of the proof. He says that it is not clear whether the Indonesian survivors are actually relatives of those who were executed. This tells a lot about how the Netherlands deals with its history. The court then appointed the Australian historian Robert Cribb to do additional research in Indonesia. Minister of Defence, Jeanine Hennis-Plasschaert, said not to be ” amused” about this decision.

When talking about ‘police actions’ in Indonesia, it is important to see the whole picture. The Netherlands was an occupier before Germany invaded the Netherlands and before the Dutch East Indies was conquered by Japan. Immediately after the liberation of German rule and the Japanese capitulation, the Netherlands continued occupying Indonesia. Rotterdam was still ruined, when 200,000 soldiers were sent to restore the so-called peace and order in the colony. Three thousand Dutch conscripts refused and were imprisoned for four to seven years.

Years later, in 1969, Dutch veteran Joop Hueting was the first to admit that war crimes had taken place. His confessions led to a lot of commotion. Prime minister De Jong realized that he had little choice and ordered to make a list of excesses. De Jong concluded that the majority of Dutch veterans were not guilty and behaved well. He said that it would be injustice to bring Dutch war criminals to court. That is how it is possible that Dutch war criminals never were held accountable for their actions. Yet, the official position of the Dutch government on the prosecution of war crimes in general was that there should be no time limitation. In 1971 a new law was created to remove the time limitation of these crimes. However, deliberately they made an exception for Dutch war crimes in the Dutch East Indies.

In 1986 Dutch historian Loe de Jong dared to use the term “war crimes” [in the draft-version of his book. When this leaked to the press,] Dutch veterans reacted furiously. Apparently the Dutch veterans could not accept that their own government used them – although they also had personal responsibility – to secure the Dutch colonial interests. Eventually Loe de Jong decided to use the term “excesses” in his final text.

To correct all those years of historical falsification the Netherlands has to answer important questions. Because who are the former Dutch Indies citizens, the Indo’s [Eurasians] and Ambonese people who live in this country? Why are these people here? It is noteworthy that the Dutch court consistently talks about “Dutch nationals”. I ask myself: who was Sukarno who was born in 1901? Who were my father and mother who were born in the Dutch East Indies in 1928? Were they Dutch nationals or Indonesians?

Shamelessly the Netherlands pretends as if their prosperity came naturally, as if the Dutch wealth has no history. Not many know the facts. Who knows for example that the Dutch government in 1949 shamelessly demanded 6.5 billion guilders for the independence of Indonesia? After UN interference they finally agreed on 4.5 billion guilders. In fact the post-war reconstruction of the Netherlands is funded by Indonesian money. The phrase “Indië verloren rampspoed geboren” [Indië lost, a catastrophe is born] never became reality because of the substantial price that Indonesia paid for its freedom.

Still there are people in the Netherlands who claim that Dutch colonialism also brought positive things to Indonesia, such as the infrastructure and roads. But do they also know who made these roads? Surely not the white rulers in their white suits. Before the Burma railway, the Grote Postweg (jalan raya pos) was realized in the Dutch East Indies, this road of about 1000 kilometres connected West- and East Java. Thousands of forced labourers, without proper food, died building that road. The Dutch historiography remembers the German concentration camps and the Japanese camps, but who knows about the existence of Dutch camps for critical Indonesians in Boven Digoel and on the island Onrust? The Netherlands should follow the example of Germany, they are much further in coming to terms with their past.

In short, the Netherlands is patronizing, arrogant, shameless and deaf.

Personalia: Jeffry M. Pondaag founded the Committee Dutch Debts of Honour in 2005. As chairman he and his foundation represent the interests of relatives of Indonesians who were killed during the war of independence. The foundation also supports Dutch who refused the military order to fight in the then Dutch East Indies. 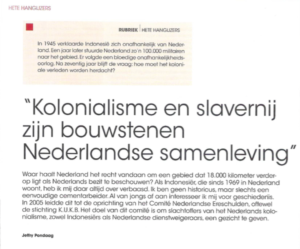 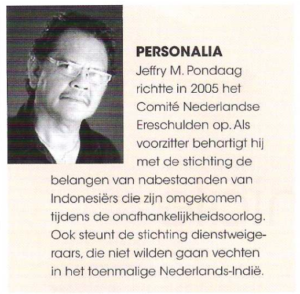