Controversy over Indonesia Exhibition at Rijksmuseum

A month prior to its opening, a major exhibition on Indonesia at Amsterdam’s Rijksmuseum has already been at the center of fierce public debate. Guest curator Bonnie Triyana and the Rijksmuseum have even been reported to the Dutch police. The Netherland’s main museum is seen as succumbing to right-wing criticism.

A few minutes after 10 a.m. on Tuesday, January 11, Rijksmuseum director Taco Dibbits opened the online press conference from the museum’s grand neo-gothic building in Amsterdam. The Netherland’s national museum for art and history will open the exhibition ‘Revolusi! Indonesië Onafhankelijk’ (Revolution! Indonesia Independent!) next month. During his opening speech, Dibbits underlined that two Dutch curators and two Indonesian curators have worked on the project. This was followed by a photo of the four smiling curators standing in front of the Rijksmuseum office: arts expert Amir Sidharta and historian Bonnie Triyana, flanked by Marion Anker and Harm Stevens.

However, even while the press conference was ongoing, reactions already started pouring in about Bonnie Triyana’s opinion piece ’Schrap de term ‘Bersiap’ want die is Racistisch’ (Scrap the Term ‘Bersiap’ Because it is Racist) published on the website of daily NRC Handelsblad the previous evening. In the piece, this chief editor of Historia questioned the use of the term ‘Bersiap’ (an Indonesian word which means ‘get ready’), which in Dutch refers to the killing of Dutch and Indo (people of mixed European and Asian blood) people in the period after August 1945. “The curators’ team has decided not to use the word Bersiap as a general term for the violent period in Indonesia during the revolution (1945-1950).” Bersiap, Bonnie wrote, is used in the Netherlands to refer to the violence suffered by the Dutch and Indos during the revolution, while victims of violence in that period also included local people. The term, he wrote, has racist tendencies.

Unfortunately, the Rijksmuseum has chosen to stay mum after that weekend. When contacted by Tempo on Monday, January 17, Rijksmuseum spokesperson Jacobien Schneider answered through WhatsApp: “We will close the issue for now. Our reactions have been made clear in the dailies Het Parool and NRC.” Bonnie Triyana, who is in Indonesia, also refrained from giving comments to the media.

On the other hand, many also voiced sympathy for Bonnie and criticized the museum, particularly after it appeared to have distanced itself from Bonnie’s viewpoint. On Friday, January 21, Comittee for Dutch Honorary Debts KUKB Chairman Jeffry Pondaag reported the Rijksmuseum, Director Taco Dibbits, and curator Harm Stevens to the Amsterdam police for “racism and collective defamation”, for still using the term Bersiap. KUKB is a foundation that has been striving for the rights of Indonesian victims in the war against the Dutch. 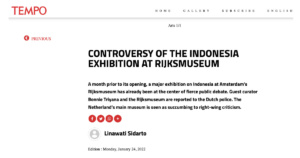