‘De Smaek van Zeêland’ (The taste of Zeeland) shifts its attention. For ten years the focus was on regional products and culinary, organizing cultural festivals.

Now the spotlights are on the rest of the ‘Waereld’ (World) and the history of the city of Middelburg. The city owes its prosperity to the entrepreneurial spirit that already started since the 13th century. The 17th century, the Golden Age, can be seen as the top of the travel, discovery and entrepreneurial spirit.

In previous centuries Middelburg was an international trading city. The city had connections all over the world: Within Europe, but also far beyond: Morocco, Ghana, Suriname, the Caribbean, Brazil, South Africa, Persia, Yemen, India, Malaysia, Indonesia, Taiwan, China, Japan to name a few. The Dutch East Indies Company (VOC), in which Middelburg owned 25% of the shares, was the first multinational in the world. The first form of globalization was visible.

Now ‘De Smaek van de Waereld’ (Zeeland dialect for ‘the Taste of the World’) again focuses on trade with these countries. In 2018, Middelburg took the initiative to organize a trade mission. This year, November 2018, more than 30 Indonesian entrepreneurs will visit Zeeland and Middelburg.

Both then and now, spices were important products. Perhaps most exemplary is pepper. It’s not without reason that in Dutch language we have the saying ‘peperduur’ (pepper-expensive.) In the VOC period the Netherlands managed to get exclusive rights of trading with Asia. Harvesting these spices took time. The precious spices were transported by ship to the Netherlands and sold with enormous profits. Of course the world of spices is much bigger than pepper alone, think about: nutmeg, mace, cloves, cinnamon. The world of spices is a world of scents, colours and of course taste.

De Smaek van de Waereld focuses once again on spices and the countries where these products came from and where they were traded. 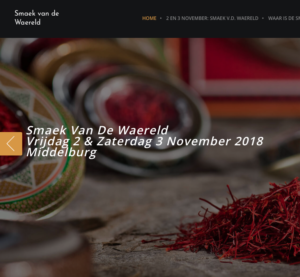