Will we see decolonizing of Dutch decolonization war?

Dutch academies have just started a huge history project. While the United States calls its most traumatic colonial war the “Vietnam War” and the French “Guerre d’Alger,” the Dutch strangely dubbed their colonial war that ended in their big political loss, not the “Indonesia war” — but politionele actie — the police operation.

The truth, of course, is that it’s about two military aggressions and the occupation of Indonesia following her declaration of independence on Aug. 17, 1945.

The Dutch term is significant. It unambiguously points to the Dutch determination at the end of WWII to revive her colonial power, which was disrupted by the Japanese occupation, through a brutal war to recover rust en order (order and tranquillity) in Indonesia.

The reality behind this narrative, however, was that a newly independent country was ready to fight for freedom with a bloody guerrilla war. The politionele actie is a hypocritical term to deny a popular, nationalistic people’s movement.

Seventy-two years after that war, the concept of politionele actie is still part of the Dutch DNA. It has become part and parcel of Dutch political thinking, media and public discourse —although it has never been part of their high school education. Now Dutch historians want to re-view it.

On Sept 14, I attended the official kick off of the big research project titled “Decolonization, violence and war in Indonesia 19451950″ in Amsterdam. Three famous institutions —the Royal Institute (KITLV), the War, Holocaust and Genocide Studies (NIOD) and the Institute for Military History (NIMH), which is part of the Netherlands’ Defense Ministry — are involved.

The project was triggered by the publication of a study by the Swiss-Dutch historian Rémy Limpach whose research demonstrates “excessive structural violence,’ in the late 1940s, meaning not only the recurrence of war cries against unarmed civilians, but that it was often directed by their superiors. This motivated the Dutch administration, after its refusal in 2012, to finance the project to the tune of €4 million.

In other words, the Netherlands administration is now ready to review its perspective of the role of the Dutch in Indonesia’s independence war. The project should be concluded in 2021. It will consist of nine parts:

(1) A synthesis of the investigated period
(2) The so-called Bersiap episode on the violence against Dutch and other civilians
(3) The political and administrative aspects in the Netherlands and Netherlands-Indies
(4) The international political context, including investigations into primary sources
(5) A comparative investigation into the decolonization wars and counter-insurgency
(6) Asymmetric war exercises and the role of the judiciary apparatuses
(7) Regional studies
(8) Social impacts of the war
(9) Testimonies of witnesses and con temporaries.

The efforts may deserve public support, yet one wonders how far would it go to unravel the period, settle various issues and offer diverse perspectives on colonialism and decolonization. Isn’t seven decades afterward “too little, too late” to review the Dutch official position that “the Dutch army as a whole had behaved correctly” during Indonesia’s independence war, as written in the 1969 government inquiry into alleged crimes by Dutch soldiers, the Excessesnota?

True, this is not a government project. Yet the question remains: Will it decolonize the colonial history? Or will it be a sort of mea culpa — offering excuses — by readjusting the Dutch old perspective? Or is the idea behind it also to stop repeated public requests to offer an apology and financial compensation to the war victims in Indonesia and elsewhere? Or is it an attempt to draw a definite conclusion on the ad-ministration’s judgment on the role of the Dutch war veterans in Dutch East Indies and after-ward? It was these veterans and their families, after all, who suffered because of the war, as they were given less appreciation, not least financially, compared to the Nazi victims in Europe.

It was they, too, whose mission it was to defend the kingdom and acted on the queen’s behalf, yet they became part of Dutch politics of colonial aggression in Indonesia—small groups and their commanders were said to have been involved in that “excessive structural violence.” Were they, being aggressors in Indonesia, then equal to Nazi aggressors in Europe?

In any case, the veterans and their families have been both influential and recalcitrant throughout the 1980s and 1990s resisting the historian Loe de Jong’s original qualification of “war criminals” in his standout work on the Netherlands during WW II, and in resisting official acknowledgement of Indonesia’s independence on Aug. 17, 1945 — thus cancelling, in effect, queen Beatrice’s plan to celebrate the 50th Indonesian independence day in 1995.

Now that their number and influence via the liberal-conservative party VVD and Prince Bernhard have considerably lessened, the research project may or may not settle their crucial role in history. Some politicians have demanded that violence against the Dutch, mixed Dutch-Indonesian “Indo’s” and other civilians during the Bersiap period should have also been investigated.

Sure, that’s important because the episode is generally little known to both Dutch and Indonesians today. Independence fighter Roeslan Abdulgani, for one, once admitted violence against the Dutch wholeheartedly. He explained it by pointing out that Indonesians by then felt deeply misunderstood and humiliated.

For, instead of negotiating with them, the arriving Dutch officers acted arrogantly and wanted to deal only with the Allied forces — which thus imploded in the bloody events in Surabaya in late 1945. Mass anger, in other words, emanated directly from the historically enforced legitimized colonial experience.

In Roeslan’s metaphor, it’s like an angry snake that cannot control its own body. Critics thus wonder how the research project will deal with the experience and perspectives of those who lived in Indonesia during the colonial era. And why are critics of Dutch war criminals apparently excluded from the project? Could this attempt to decolonize colonial historiography be a form of neo-colonialism of Dutch colonial history in Indonesia?

Interestingly, though, the project plans to involve Indonesian academics, but what perspective and in what role the two Indonesian historians will exactly perform are not yet clear.
—
The writer is a journalist, formerly with Radio Netherlands Worldwide. He resides in Amsterdam. 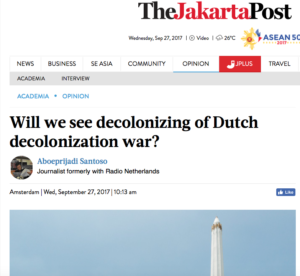