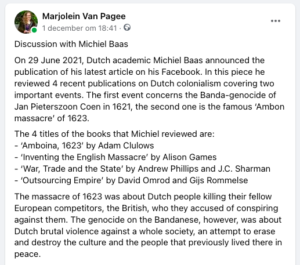 On 29 June 2021, Dutch academic Michiel Baas announced the publication of his latest article on his Facebook. In this piece he reviewed 4 recent publications on Dutch colonialism covering two important events. The first event concerns the Banda-genocide of Jan Pieterszoon Coen in 1621, the second one is the famous ‘Ambon massacre’ of 1623.

The 4 titles of the books that Michiel reviewed are:

– ‘War, Trade and the State’ by Andrew Phillips and J.C. Sharman

The massacre of 1623 was about Dutch people killing their fellow European competitors, the British, who they accused of conspiring against them. The genocide on the Bandanese, however, was about Dutch brutal violence against a whole society, an attempt to erase and destroy the culture and the people that previously lived there in peace.

Michiel does not mention this important difference between the two massacres, he describes them as two equally important events. In his Facebook-post of June 29 he writes:

“now that no fewer than five different exhibitions pay attention to this violent past, it is good to reflect on how connected the whole history is with the way the Netherlands and England dealt with each other in that period.” Apparently, he finds the relationship of European colonists the most pressing issue to discuss. He presents it as something new, as if nobody every studied how colonists fought each other too.

Besides that, Michiel claims to fear the ‘oversimplification’ of colonial history, he presents himself as an advocate of ‘nuanced’ history writing. He praises these 4 books for providing a lot of nuances. He says that we cannot talk in generalized terms on this “extremely complex and long history”. Such a statement is not meaningless when it comes from a Dutch academic. It usually means that the person in question refuses to apply ethics to the interpretation of history. As I was taught during my study in Leiden, the standard rule is that a historian should be ‘neutral’ and can never judge about what was right and what was wrong. I have learned that the reason behind the rejection of moralistic labels, such as good and bad, is the fear for an uncomfortable discussion about Dutch complicity.

I recognize this mechanism of avoidance because this is what many Dutch academics have accused me of. Especially after I wrote my book ‘Banda, the genocide of Jan Pieterszoon Coen’ (2021), several readers told me that they found my approach ‘biased’, not neutral. Thus, in order to be taken seriously as a historian, I better stopped talking about the moral interpretation of facts. In other words: judging about what was right and what was wrong was not my job as historian.

I still disagree. It is impossible to be ‘neutral’ when horrific human rights violations are discussed. When Dutch people do not firmly condemn colonial deeds, and call for ‘nuance’ instead, they pretend it is unacceptable to say it was bad and wrong. I think it is necessary and absolutely acceptable for Dutch academics to firmly reject colonialism in all its forms.

In his Facebook post of 29 June Michiel writes that he hopes that “the renewed attention to the Dutch colonial past will lead to deep and nuanced insights, which will also lift current debates to a higher level.” But to me, what Michiel wants is not lifting the debate to a higher level, his opinion is very common and conservative. He wants to hold on to the old, colonial terms that exclude ethics from history writing and fail to describe colonialism for what is was: foreign occupations of another men’s land. Simple as that.

In the conclusion of his article Michiel even criticizes the work of a black female academic in the Netherlands, Gloria Wekker. He says that when she speaks of four hundred years of imperialist rule, it is way too simplistic. According to him, Wekker’s book White Innocence: “fails to capture the complexity of this enterprise itself and runs the risk of contributing to inaccurate ideas about Dutch colonial ‘might.’”

Illustrative example of Michiel’s conservative pro-colonial attitude is the way he responded to Jeffry Pondaag, an Indonesian living in the Netherlands, chair person of KUKB. He posted a comment below Michiel’s FB-anouncement. Jeffry wrote: “The Netherlands together with their subsidized followers, the racist traitors, the Indies people and Ambonese KNIL and NICA Made in Holland, were and are WRONG, PERIOD, THERE IS NO COMMA!” Michiel did not even bother to respond, he simply removed and blocked Jeffry right away.

I also posted a comment which Michiel removed too, yet he did not block me, so I posted my comment again, which went: “Complex history?? Why should we pay attention to the selfish and predictable fights between Western European colonials? I think this is something that has been discussed forever. Moreover, we are talking about the violent occupation of other people’s land, simple as that, there is nothing complex about that, if you are propagating ‘nuanced views’ you are complicit to whitewashing.”

Michiel then replied: “Just as with your book, I noticed that I could only react negatively, which prevents me to have a productive discussion. In particular, your last statement about whitewashing also indicates that you did not read the article carefully. Probably because you don’t think it’s necessary, because after all: you are the one who is right. In your book you did not shy away from insulting all kinds of people involved who have been committed to fight against colonial glorification, racism and more in particular the image of Coen. I was wondering if you ever critically examined your own whiteness and privileges while writing? What particularly fascinated me about your book is how cheap and opportunistically you used all kinds of sources. In the selection, you are clearly the only judge who is able to decide on this. That also characterizes your reaction to my article. Without substance, not based on facts, but purely expressing a feeling of anger and dissatisfaction that in no way contributes anything to the debate other than heating up the fire.”

Then, another person left a comment below the Facebook announcement of Michiel Baas. Lisa Alman Yapari wrote: “As someone with roots in the former Dutch East Indies as well as Indonesia, I don’t find this research particularly enlightening. Who cares that the British and the Dutch were fighting each other? I don’t. I feel insulted by this blatant white Eurocentric perspective.”

Meanwhile I shared his post on my own wall where I wrote: “This coward [Michiel Baas] writes a piece about 4 colonial books and when Jeffry Pondaag posts a comment below, he immediately responds with a block. He hasn’t blocked me (yet), but he did delete my comment. How brave are you then.”

Not soon after that Michiel started to reply on my post too, he wrote: “Exciting to read all those explosive discussions about my article here. As usual not about the content but mainly about all kinds of feelings and with the usual suspicions. The reason that I removed Pondaag’s comment was because I found it vague and incoherent and upon verification it turned out to be a copy paste that he constantly puts under all kinds of posts. But Marjolein, your second attempt paid off. I responded to it. So brave of you to present me here as a coward, especially considering that we never met, you don’t know anything about me, and clearly haven’t even read the article. But given your book, I shouldn’t have expected more.”

My reply to Michiel: “I read your article and Jeffry’s particular comment that you deleted was based on the content too. My post here was primarily about your brave move to block Jeffry Pondaag. I think that’s coward, yes, I won’t take a word of that back.”

Then Lisa left another comment underneath my post: “The article was posted in an Indo group but I immediately got strange vibes while reading it. It was only about the English this and the Dutch that, centering the white Eurocentric perspective. In this day and time you can no longer call this ‘nuanced’, let alone that it ‘lifts [the discussion] to a higher level’. It was just absurd to read. To the colonized peoples it made no difference whether they were oppressed by the English or the Dutch. In fact, it comes across as if Baas wants to pass the bloodguilt of the Dutch onto the English. What a ridiculous mockery!”

I wrote to her: “Thanks for your comment Lisa, that is how I see it too! Super Eurocentric views that are presented as something new. In any case, it’s quite strange that he doesn’t mention my book, while his review pays attention to everything that recently came out on Banda and the VOC. 😊 ”

Michiel: “There is nothing weird about not including the publication of your book in my review article. The piece was already written when your book came out. By the way, I had it on pre-order and read it as an e-book almost the day it was published.”

Me: “hmm… you wrote earlier that you didn’t discuss my book because you could only speak negatively about it… moreover, your piece is published now, in July, while my book was already published in April. You do mention exhibitions that opened after that. So don’t suddenly change your story. You thought my book was so bad and that is why you didn’t mention it.”
—