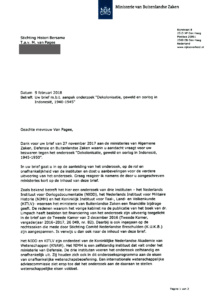 Thank you for your letter of November 27, 2017 directed to the Ministries of General Affairs, Defense and Foreign Affairs in which you ask attention for your objections to the investigation “Decolonization, violence and war In Indonesia, 1945-1950”.

In your letter, you discuss the reason behind the investigation, the role and independence of the institutions and give recommendations for the further execution of this research. I would like to respond briefly to the contents of this letter on behalf of the Ministries you have addressed.

The NIOD and KITLV are part of the Royal Netherlands Academy of Arts and Sciences (KNAW). The NIMH is an independent institute that falls under the Ministry of Defence. The three institutions carry out the research independently. They also adhere to the requirements of independent scientific practice in this research program. An international scientific advisory committee ensures that the research meets the scientific requirements.

On the website of the research (www.ind45-50.org) the three institutions clearly explain about the program, the background, the content, the design, method and independence of the research. The researchers also provide insight into the cooperation with Indonesia.

You have shared your recommendations for further research with the research institutions. The scientific debate and scientific research in particular benefit from discussion and criticism. It is not my duty to take part in this discussion.

[1] In footnote 1 of the open letter we already referred to this document when we wrote:

In the letter of December 2, 2016, the government stated that the study of Dr. Limpach was the decisive factor to finance large-scale research. The passage relating to the lawsuits primarily emphasizes the goodwill of the government and did not mention the repeated rejection of claims and the doubts of the government regarding evidence. The paragraph from the government-letter referring to the court cases: “From 2009 onwards the debate also continued in court. In 2011 the Court in The Hague accepted the claims of widows of victims of summary executions in Rawagedeh. In 2013, the Cabinet provided a temporary regulation for compensation to widows of victims of summary executions. This arrangement was extended for two years in 2015. Furthermore, in August 2016, the government gave the Netherlands Institute for Military History (NIMH) permission to publish the data of 350 investigated violent incidents in relation to pending legal cases.”
Subsequently the government-letter stated that the investigation should not be limited to the alleged violence by all parties, but should also focus on: “the broad context of post-war decolonization (including society) and the political, administrative, judicial and military action in 1945-1949 in the former Dutch East Indies/ Indonesia, both from the Hague and from a local perspective. It is important that a follow-up study uses an integral approach and elaborates on matters that have been addressed in Dr. Limpach’s study. The spiral of violence during the so-called “Bersiap” will be included in an investigation. Also the political decision-making in The Hague about the decolonization, the broad support in the Netherlands for maintaining the relationship with the Dutch East Indies/ Indonesia and the broadcast and the action of the Dutch military, the limited information provision, as well as the aftermath after 1949 and veterans care, deserve further investigation.” See: https://zoek.officielebekendmakingen.nl/kst-26049-82.html Apparently the three institutions accepted this government recommendation, as reflected in the choice of research topics/ sub-studies. See the website of the project “Decolonization violence and war 1945-1950”: http://www.ind45-50.org/research