“As one of the initiators of the open letter, I was not invited to speak at the public meeting of 13 September. Due to this I had to give my opinion via a video message. To my surprise this was answered by the project leaders by sending me flowers. There was a small card in which they thanked me for my own initiated contribution.

The performance of ‘Delta Dua’ reflected the perceptions of Raymond Westerling and two Maluku brothers: one pro-Indonesian and one KNIL soldier. Yet what the performance did not explain was that this hate between two brothers was exactly the result of centuries of divide-and-rule, the consequence of the racist system of the colonial regime. 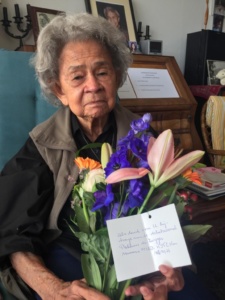 Further, the interview session with the third generation reflected the fact that young Dutch people do not know their own history, partly because they don’t learn about this in school. Only the speeches of Bonnie Triyana and Jeffry Pondaag paid attention to three centuries of Dutch colonial rule.

The project leaders did not provide information about the status of the study itself that is now already being conducted for one year. It is still completely unclear which Indonesian researchers are participating in this study. Only the names of the two Indonesian project leaders, Prof. dr. Bambang Purwanto and Abdul Wahid, are known. I also noticed that the controversial involvement of Oostindie (who wants to write the synthesis as a non-Indonesian expert) was not discussed.

As I pointed out in my video message, the most crucial issue is that the starting point of the research should be the legal recognition (not just ‘de facto’) of the Republic of Indonesia on 17 August 1945. If they acknowledge 1945 as the beginning of the independent state of Indonesia, the sub project about the Bersiap is unnecessary. There was no power vacuum at that time. As far as it did exist, it was only for two days: the day Japan capitulated on 15 August 1945 and the proclamation of the sovereign Republic of Indonesia on 17 August 1945.

The subproject on violence and war must start from the cause, as I also emphasized in my video message. In the period 1945-1950 the sovereign Republic of Indonesia – after 3 ½ centuries + 3 ½ years of colonial occupation and oppression – was attacked by more than 100,000 modern armed Dutch troops.

In any case, the entire research should focus on the deeper cause of this largely unwritten part of Dutch national history: the unlawful occupation of Indonesia, a region 55 times larger than the Netherlands.”