Honor for Dutch veterans is unacceptable

It would be better when representatives of the Dutch government stop commemorating Dutch veterans who fought in Indonesia, says Arthur Graaff.

On August 14th the Dutch House of Representatives (The Second Chamber) remembers the Japanese capitulation [of August 15ht, 1945.] The chairwoman of the Second Chamber, Ms. Khadija Arib leads this ceremony. This is followed on the 15th with the public Indies commemoration in The Hague and on September 1st there is the disputed commemoration of the Dutch Indies’ veterans in the city of Roermond. Ms. Arib attended the latter commemoration last year.

Five organizations together with some publicists and scientists have sent a letter to the chair woman of the second chamber of the Dutch parliament, Ms Arib: asking her to distance herself from the colonial past in the Dutch East Indies/Indonesia and not to honor the military operations that lasted from 1945 until 1950. Some of the co-signatories are professor Abram de Swaan and human rights’ activist Jeffry Pondaag.

Earlier, Arib took part in commemorations remembering the abolition of slavery (Keti Koti) and the Holocaust. Which is fine, although the logical next step would be to distance oneself from five centuries of Dutch colonialism in Asia.

Yet, in 2016 on August 14th Ms Arib gave a speech in which she expressed understanding for the Dutch soldiers who fought in Indonesia. However, they committed gruesome crimes as we know now from two excellent academic studies. Among others by Dr. Rémy Limpach: ‘The burning kampongs of General Spoor’ (2016), which reads as the final report of the public prosecutor. Answering all questions like: Who-what-where-when and why.

The infamous and murderous Dutch captain Westerling, but also commander-in-chief Spoor, as well as the chief public prosecutor Felderhof and governor Van Mook, and of course the governments concerned, are all linked in this extensive study of nine hundred pages to arson, robbery, rape, torture and executions. Crimes that were often committed by inexperienced Dutch boys, aged only 19 or 20 years, recruited right from the villages behind Amersfoort, Vught and Westerbork [During WWII Nazi concentrations camps were located in these three Dutch towns.]

Of course they were inexperienced, nevertheless one remains responsible for robbery, torture or executions – together with the responsibility of the chief commanders and the ministers. However, the successive governments never acknowledged the atrocities that Dutch soldiers committed, let alone expressed regret about it.

Again, three months ago a new enlightening study appeared, written by Dr. Piet Hagen, entitled ‘Colonial Wars in Indonesia.’ The book contains 1024 pages of documentation about the 500 wars that the Netherlands fought within 500 years of Dutch-East-Indies’ colonialism…. A necessary book to read, in particular for those Dutch who are still supportive of the so-called VOC-mentality.’

In 2015 Ms. Arib’s predecessor, Ms. Anouchka van Miltenburg, publicly expressed her apology in a similar case. The Dutch Antifascists’ League complained about her speech of August 14th2015 because she praised the Dutch veterans who had fought in the Dutch East Indies/Indonesia. Miltenburg further compared them to the Dutch resistance fighters who fought against the Nazis during WWII. Incomprehensible and distasteful.

Then the second point: last year Ms Arib and then assistant-minister Van Rijn took part in the so-called ‘National Indies Commemoration’ of the Dutch veterans in Roermond, next to the statue of General Spoor and the monuments for the 6,000 Dutch military casualties in the Dutch East Indies/Indonesia.

On Sept. 1st 2018 the old comrades are going to gather again to continue the falsification of history, again denying to recognize the real victims, the women, the children and elders from villages like Rawagede, again no apology for them, no comfort. [In December 1947 Dutch military killed 431 innocent men out of revenge. Their relatives won court cases against the Dutch State, after which the Dutch government had to pay compensation to the widows and children.]

But also to reconfirm the ‘omertá’, mafia code of keeping silent about crimes. Always absent is whistleblower Dr. Joop Hueting, the former Dutch lieutenant who, in 1969, dared to confess on national television that he took part in atrocities against Indonesians. After his confessions he received threats so serious that he immigrated to neighboring Belgium.

Ex-general Hein Scheffer, current president of the Dutch Veterans’ Platform, said to us in a recent conversation that he and his organization do not want to exclude Dutch veterans, as long as no one of them is convicted for war crimes. He did not respond to our argument that even 500 ex-Nazi’s joined the Dutch forces in the Indies. In stark contrast to the convictions of 3,000 Dutch conscripts who refused military service and got two and three years of prison sentence. [In one case someone was even convicted for seven years.]

In conclusion, the understanding and honor for Dutch veterans in Roermond is unacceptable, this is at least true for all people with ‘good intentions’ and for the victims of colonialism. Of which many thousands are still alive until today, in particular in Indonesia.

What is remembered in Roermond is the last visual example of state suppression, state racism and state discrimination. Was it not the Dutch Minister of Foreign Affairs, Dr Ben Bot, who as the representative of his government in 2005 (carefully) stated that “the Netherlands stood on the wrong side of history?”

—
Arthur E.A.J. Graaff is spokesman for the Dutch Antifascists’ League (AFVN-BvA).
He wrote this also on behalf of ‘K.U.K.B.’ and the Committee for Vigilance Against Re-appearing Fascism and action group ‘De Grauwe Eeuw’ (lit. The Grey Century.) 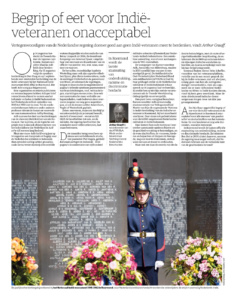