How will the Dutch study to 45-49 benefit average Indonesians?

*  A shorter version of this article was published in Jakarta Post on 2 February 2018
By: Fia Hamid-Walker, a public interests graduate lawyer and Postgraduate student at Melbourne University

As an Indonesian graduate lawyer living in Australia with academic interest in Indonesian postcolonial society, I signed the Open Letter sent to the Netherlands government in November 2017. Recently in The Jakarta Post professor Bambang Purwanto, head of the history department at the Gajah Mada University (UGM) in Yogyakarta, responded to the questions raised in an Open Letter regarding the research project titled “Decolonization, Violence and War in Indonesia, 1945-1950”. The research, which the Netherlands government has decided to fund, has sparked controversy amongst historians, academics, journalists, researchers and activists from both Indonesia and the Netherlands.

One of Bambang’s arguments is that the research benefits Indonesia as it will produce new insights into the nation’s history. Yet it remains unclear who will benefit and in what way. The Dutch government’s funding is likely to benefit recognized research institutions such as UGM. However, I do not see how this study will produce historical relief for the average Indonesian who still experiences the ongoing impacts of Dutch colonization.

Normally, research funded by foreign governments is met with skepticism from Indonesian nationalists who argue that such sponsorships only serve the sponsors’ own interests, which is the Dutch in this case. Hence, the objective of the research should be made crystal clear and the approach transparent. However, we still don’t know how the money will be spent or who will be the recipients. While not covered in the Open Letter, an additional issue concerning transparency is whether the research outcomes are accessible to the public, specifically key stakeholders such as historians, journalists, lawyers and students.

The direct connection of the Dutch institution for Military History (NIMH) to the ministry of Defense makes it difficult to see this as an independent investigation. Especially when taken into account NIMH’s double role, as they are responsible for the historical verification of legal claims that Indonesian war victims have launched. The point is that the government in the Netherlands has not only been rejecting (and fearing) the latter claims, they also denied the first research proposal of 2012. A large-scale investigation was only funded after a Dutch-Swiss historian working at NIMH published his study on Dutch war crimes.

Now Bambang may claim he got 1,000 percent independence, however, the truth is he was not asked to participate in the decision-making process. His Dutch counterparts had already developed the outline of the research program before he was invited to join.

Currently the Indonesian historians are only collaborating in two of the nine sub-projects. Hence, I am not overly optimistic that they can change or influence the direction of this academic investigation. The objective is only to focus on people and events from a perspective that can be considered too dominantly Dutch to begin with. The contradiction is also that the Dutch researchers presented the cooperation as a close dialogue together. How does that relate to Prof. Bambang’s comment about 1000% independence? If the Indonesian team is truly separate from the Dutch, why did Dutch project-leader Oostindie need to go to Yogyakarta last November? Though it looks like a close cooperation, there are nevertheless no pictures and names of the Indonesian historians on the website of the project. Who they are remains vague.

Apart from that: why were there only Dutch people present at the kick-off event of the project in Amsterdam last September? Why are the Dutch researchers sidelining an Indonesian activist as Jeffry Pondaag? All together it seems unlikely that Indonesian voices, including the motivation of the Indonesian freedom fighters and the context of their struggle, will be fully understood. The Dutch team should have involved Indonesian voices from the start on an equal footing, not just in the execution stage.

Bambang and his team are positive that the Netherlands government will allow them to show an Indonesian perspective. However, they should reflect on what the exclusion of Indonesian voices teaches us about the unequal power relations from the colonial past. Keep in mind that this research studies our nation’s experience as former colonized and racialized bodies.

The Indonesian researchers must be honest about their nation’s experience. In that sense I find it rather naïve of the UGM researchers to accepts funds from the Dutch government as if the latter is a neutral agency. Has the colonial power relation changed? What about the patronizing attitude that white power still holds over us? Even in our post-colonial society, Indonesia is still being controlled by tokenized foreign aid and our societal character has often been framed as inherently violent by international media. If the Dutch government had good intentions, the control of the project would be relinquished to independent bodies as suggested by the Open Letter.

Indeed, the Open Letter is critical of the research project, yet instead of mere “accusations” as the Post reported; the letter listed extensive arguments identifying several problematic issues with the project.

Colonialism has scarred Indonesians to the extent that they now experience inter-generational trauma.   The only way to free us from colonialism is to start by decolonizing our minds. My decision to sign the Open Letter and to be critical of the research project was the first step in this direction.

The project’s special focus on anti-colonial violence perpetrated by Indonesians is remarkable. Does this research just want to confirm the colonial narrative of aggressive “blood-thirsty” Indonesians versus victimized Dutch? Why does this project not pay attention to the previous racial colonial context, including the influence of Dutch colonialism on contemporary Indonesia?

Just zooming in on a five-year period and forgetting the more than hundred years of Dutch colonization, will not only provide an incomplete picture, it also glosses over the impact of Dutch colonialism on Indonesians of today. For example, many Indonesians view my deep-dark skin, round face and flat nose as less attractive as those Indonesians of mixed race. Whilst growing up in Indonesia, I experienced “colorism” daily. Colorism is racism. Most dark-skinned Indonesians, especially women, are seen as inferior, even by Indonesian men. It is naïve to think that racializing our body is not related to Dutch imperialism.

I start to decolonize myself by taking charge of my own mind and loving my own body. I no longer seek validation from a system that seemingly still maintains white power. Ultimately, I would like the Indonesian researchers to adopt a similar response whilst being involved in this project by being honest to themselves and their research objectives. I understand that the Indonesian researchers are eager to assist in the Dutch research as their involvement is likely to improve the international reputation of their university. It may launch their careers and improve their stature within the university.

In conclusion this project will not likely benefit the average Indonesian who deserves an honest, accessible and transparent account of their own history. My concern is that the institutions involved will have the ultimate power when it comes to the presentation of the findings. Not in the last place because Dutch project-leader Gert Oostindie is going to write the synthesis on his own, as announced during the kick-off event of the project in Amsterdam.

Therefore, the project should be re-written from the start to ensure all key stakeholders are equally represented. It should be directed and managed by independent bodies with no government strings attached.
— 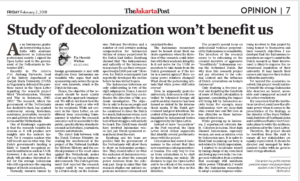