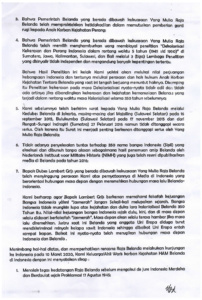 To: His Majesty King Willem Alexander

Delivered via: Mr. LAMBERT GRIJNS
Ambassador of the Kingdom of the Netherlands for Indonesia
Jalan H.R. Rasuna Said No. Kav S-3
Jakarta Selatan

That we who are named below:

We hereby present a demand that responsibility be taken for the damages done to us by Dutch War Crimes carried out by the Dutch army. In connection with this and taking into account the following:

In consideration of the above issues, and recognizing the plans of the King of the Netherlands to visit Indonesia on March 10th 2020, we the Family/Heirs of victims of Dutch crimes against humanity in Indonesia declare our position as follows:

Thus do we deliver this letter, and ask that His Majesty King of the Netherlands provide a response to it as soon as possible.  The response may be addressed to our associate Mr. Irwan Lubis under the address Kantor DHC Angkatan 45 Jakarta Pusat, Gedung Joang Jl. Menteng Raya No. 31 Jakarta Pusat, Kode Pos 10340.

Those who represent the Heirs of the Victims,