Next week I am on a plane with Michael [van Zeijl] to visit Java and Sulawesi. For both of us, it is a first trip back. This is a journey that you have had in your mind all your life, making this first trip back. Still unexpected, but as soon as we had the chance, we did not hesitate, the time is now, it must happen now. And all I can do is cry. Javanese-Surinamese diaspora people, we carry an extra layer in our colonial trauma. Carry, because that is what us Javanese do, we carry it, and we continue. 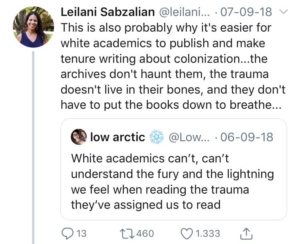 As a Surinamese Javanese person, I am ‘fortunate’ that we still know where our family lives in Java. Somewhere in the province of central Java in a small village. And I feel that intense resistance from within now, confronting a trauma passed on from generation to generation. Many people don’t go looking for their roots, at least not in a profound way. They travel all over the world except to their country of origin. I have also seen many people adopt a different culture; even though they are marginalized by white society, being confronted with their own roots is still too painful. Or they turn to an extreme identification with white identity, rub shoulders with fascism and neo-Nazism, and let themselves be instrumentalized by racists as the token POC for their racist agenda. No matter how reprehensible, the latter is also a trauma response. And now that I carefully take on the confrontation, I notice what is happening, and I feel the pain.

Thinking of my great-grandparents, they were shipped to Suriname as Muslims. They said goodbye to their family, as if they would return in a while. There was no real goodbye. They had no idea where they would end up and they did not know they could never go back. They did not earn enough money to take the boat back to Java, and even there had been enough money, there were no boats back anymore because of relations with the Netherlands and the Dutch Indies. My family in Java really waited for my great-grandparents and their children to return. But they never came. And then, after a traumatic journey in an unknown country, where you weren’t accepted, you had lost everything, and there is no going back, you have to make the best of it. Unable to return, they made the switch: what we do is of no interest to ourselves anymore, so we make the best of it, for our offspring and for the community. The move to Suriname had already been about doing what was best for their offspring, but after the false pretenses, and a changed situation, they put their entire lives in the service of creating a better life for someone else. The past is gone. The present is heavy and the future is uncertain. Better focus on survival, with neither the mental space nor the time to focus on it. We have to survive and looking back makes no sense because it’s gone. But the pain went straight through every child, even if you don’t talk about it. You feel it. There was no mention of the time in the Dutch East Indies, that was too painful, but the pain was passed on to the next generations.

A system of apartheid prevailed in Suriname [as it did in the Dutch Indies]. You could not use the institutions if you were not “integrated”. Faith can be such a beautiful thing to hold on to when you have lost everything. But my great-grandparents gave up this last piece of identity also, so that their children could go to school. They were called ‘boarding schools’ at the time, but were plain old residential schools the way they did to the American Indians in America and to the Aboriginals in Australia. Any Javanese culture was ridiculed and destroyed. Everything that was not Western was uncivilized and will never make you succeed in life. The children in the boarding schools had a hard time, they cried out of homesickness, and some developed conflicts with their parents because they didn’t understand why they had sent them there. These boarding schools were therefore an extreme disruption of identity. They say that many who went there ended up well, and from a capitalist perspective that is correct. Many became successful, had good careers, but the other side deserves to be seen also: the emotional damage and divisions that the boarding schools caused within the Javanese community. Because Western culture was better and some were then seen as arrogant. Students were taught a very different set of values in the boarding schools than what they had learned at home, and that clashes. Many of the descendants of the Javanese in boarding schools have relationship problems. Those are signals that come from somewhere. THIS is what colonialism does.

I am therefore constantly processing and grieving. The suffering that has never been allowed the time to just be, I try to give it space. The return to Java is something my ancestors were never able to do. Everything I will observe, the wind and the temperature that I will feel on my skin, will be what my ancestors always longed for, but were denied. Everything I will observe is also what was taken from ME. And I won’t just feel the longing to go back, but also the feelings of those left behind in Java, I will also feel the feelings of loss of my family members who were left behind in Java. The hope and the pain that my family would return should not be forgotten. I write how we, as descendants, carry the trauma with us in our genes, like we carry the power in our genes also. Our identity is in our bones, and our ancestors are in us, I will take them back home.

This is the personal load that I carry. White people who butt into our Indonesian and Dutch Indies history, don’t carry this load. Remember that everything you do is from a privileged position. You don’t carry the trauma. And because this privilege is unmerited, you do not deserve the honor of bringing the important matters of our history to light. Our suffering cannot yield you glory. It is your job to set things right, and to use your privilege in the right way, where normally your privilege is used to oppress us. We must heal ourselves and our community, and where possible, our history. You can do your part of the healing of what your social construct did to us. And if that doesn’t give us our props, you’re the last people it belongs to.
—