Investigate and Commemorate the Colonial Past Together

There is a lot to say about the Dutch colonial history in ‘Indië’ – certainly also some good things – even though the principles of our presence do not fit in a contemporary perspective. In the twentieth century the Dutch policy was driven by a mix of hard-boiled economic and geopolitical self-interest and a sincere desire to bring development to the inhabitants of the archipelago.

The paternalistic belief that the Indonesians could not accomplish this without us combined with the idea that they themselves agreed to this, strongly contributed to the lack of understanding of Indonesian nationalism and the readiness to go to war, even if it was not supposed to be designated that way (the term ‘police actions’ suggested that there were only some domestic issues of unrest). And then there was the solemn duty to protect several hundred thousand inhabitants of the archipelago linked to colonial rule and therefore bound to lose everything in case of anarchy or departure of the Dutch.

In this context, the Netherlands reinforced the Royal Dutch East Indies Army (KNIL) and additionally sent 160,000 Dutch troops to Indonesia. These armed forces fought a war that became gradually dirtier and that could not be won. The negotiations under heavy international, primarily US, pressure led to the transfer of sovereignty. The Dutch soldiers were demobilized and sent back home again. At home in the Netherlands there was little attention or appreciation for their work; this chapter had to be closed as soon as possible. A discussion about war crimes did not fit the rosy self-image cherished in the Netherlands.

In 1969, veteran Joop Hueting blatantly addressed the sensitive issue in the press by speaking about war crimes committed by Dutch armed forces. The discussion in the Netherlands ‘exploded’; politicians, veterans and their organizations and, supposedly, also the military leadership had no interest in extensive research that would probably undermine the claim that “excesses” were only committed occasionally. The Dutch government concluded in 1969 that its armed forces as a whole had behaved correctly.

That image has thoroughly changed. It is quite possible, even likely, that most of the soldiers in the Dutch army were not actively involved in war crimes. Nevertheless, it is likely that the number of war crimes of which our armed forces were responsible in Indonesia should be counted in the tens of thousands. That is totally different than the government’s never revoked position of 1969 . Dutch government did admit, in 2005, that the Netherlands should not have waged this war (in this way), it had been a war “on the wrong side of history.” In 2013, Dutch government also apologized for all proven “violent excesses.”

Research on the colonial history thus requires a revision of a rosy Dutch self-image. How could it be otherwise? Would such research be characterized by a ‘go-away-with-us’ mentality? Not necessarily, even if this often-voiced critique is not complete nonsense. There is a certain connection between what we include in, or skip from, our historiography, and what we want to tell about our national identity. There is also a certain connection – but far from straightforward – between our self-image and the resilience of our society. Non-stop self-criticism will surely affect our nation’s mood, and may encourage tensions. Nation building requires not only remembering, but sometimes also forgetting – or rather a process of closure.

But who are we, the Dutch, today? We are a country with over a million inhabitants with colonial roots. For this reason alone it is important to tell a balanced story about how and why ‘we’ went overseas, what we did over there, how this history came to an end (or not), and why and how postcolonial migrants arrived here and settled. That is our domestic agenda. But there is also a foreign agenda. A country that for decades claimed to have high ideals about human rights issues and international relations will only be taken seriously when it demonstrates to have an open eye for the darker side of its own international history.

To be specific: first we need to have a better understanding of what exactly happened during this war. Until today the Dutch government refuses to finance extensive research. That is untenable: commemorating begins with knowing and understanding of the past and there is still much to do. Preferably, such research would be carried out together with Indonesian historians: that would create opportunities for future commemoration in which we can reach out to one another.

Should the Netherlands apologize to Indonesia? In a sense this is already done by the official statement of 2005 that claimed the Dutch to be “on the wrong side of history” and later by apologizing for specific ‘violent excesses.’ As a historian I do not feel the need to trumpeter on that, although the apologies could be more generous, the more so as we have more clear evidence that the Dutch violence was structural, and that the military leadership – and to a lesser extent the political elite – was well aware of this.

To whom should an apology be made? In fact this is already done towards individual Indonesian victims, and the way this gesture was formulated suggests that there will be many more apologies in the years to come. Apologies also towards the Indonesian state, if only by finally recognizing August 17 as the foundation date of the Republic. But an apology would also be appropriate towards the Dutch veterans, of which the majority were conscripts. They were sent to Indonesia with an impossible mission that was difficult to justify. Upon their return to the Netherlands there was little appreciation for them.

Should the apologies be linked to financial gestures towards Indonesia? That is a matter of international law of war and bilateral politics. In a sense, this question is answered now the Dutch state handles individual cases (summary executions, recently also cases of rape) and pays – provided there is clear evidence – (modest) compensations. It is foreseeable that there will be many more of such cases which again will lead to compensation payments. That is okay, but the question is whether this is the best road towards further reconciliation between the two nations. Ironically Indonesia seems not to be interested in more cases and gestures – these are perceived as patronizing. For many reasons, Jakarta prefers to look ahead. So I would suggest: strive for commonality in joint research, remembrance and reconciliation. 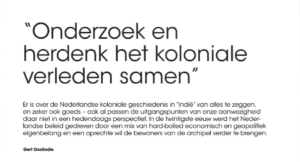 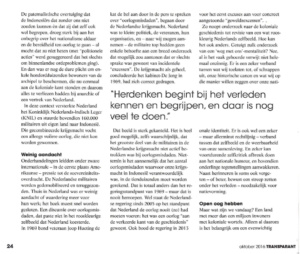 [Originally published in Dutch. Translated by Marjolein van Pagee and checked and approved by Gert Oostindie.]