Letter in a used milk can

When you receive this letter, which I stored in a used milk can, please hand it to the one it is intended for, my mother. Of course, I know I shouldn’t really throw used milk cans into the ocean. Maybe sometime later, you can come by my house – I wrote the address on the back of the can – so you can tell me that you handed the letter to my mother, and that you disposed of the can in the proper place, because according to Bu Salimah, my teacher, waste tins will pollute the ocean and make fish sick. Please forgive me, but I so want to talk to my mother and I don’t know how else to send her this letter. Okay, you can have a look at it, for I am pretty certain that – in the end – you will be the one handing it to my mother. 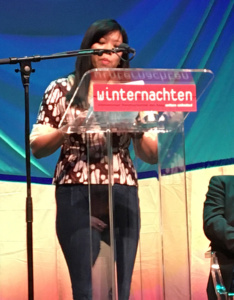 Dearest Mother, who I miss so dearly,

Yesterday was my birthday. Since you went away, each birthday, grandfather tells me stories. Last year, grandfather told me about the wanderings of the famous king’s son, the bodhisattva Sutasoma. This year, he told about the legendary bird-god Garuda, and how he helped his mother.

One afternoon, after having spread the shrimps on the yard floor so they could dry in the sun, he called me. I was just busy helping Bu Darmi packing terasi, dried fish paste, into little block shapes. Bu Darmi’s terasi is selling like hot cakes. A week earlier some city folk, clad in brown coloured uniforms, came by and asked Bu Darmi about her terasi production. They didn’t ask grandfather anything. But he didn’t mind, because all a fisherman needs to do is catch the right shrimps, not answer all kinds of questions. The city people gave Bu Darmi money, to sell her terasi in the West. That is why she is making a lot of it now, and so I am assisting her, shaping the terasi into small square blocks. I start right when I get home after school, although it makes my fingers smell, and the odour also sticks to the blouse of my school uniform, so that tomorrow, at school, my classmates will be holding their noses and calling me names again: “Fish paste child!”. Being a fish paste child is not so bad, I guess, because there’s no denying I smell of terasi, is there? What they’re yelling is true. I’m even glad about their changing my nickname into ‘anak terasi’. Before that, they used to call me by another name: “Orphan child!” That made me very sad, because it isn’t true. I have a mother. I shall prove to them that I do have a mother. So, Mother, after you have received this letter, please write a reply, and send it back with the person who brought it to you (I have written our address on the back of the milk can).

Oh, and Mum, I wanted to tell you something else about grandfather’s fairy tale about Garuda. Well, Garuda’s mother, a  goddess named Dewi Winata, had lost a wager from Dewi Kadru. They had been guessing which colour the tail of the horse, that would be coming out of the milky ocean, was going to be. Dewi Winata had decided on white (which was correct), but that deceitful Dewi Kadru had the colour of the horse’s tail appear black. So Dewi Winata lost the bet and became Dewi Kadru’s slave. At first, I wasn’t really certain what that meant, being a slave, but grandfather explained that it meant Garuda’s mother had to comply with Dewi Kadru’s each and every wish, including taking care of her hundred children. Mum, did you know that Dewi Kadru had a hundred children? Mum, did you know that Dewi Kadru’s children were snakes? So just imagine Dewi Winata, and how she’s supposed to take care of a hundred snakes. That must have been very hard. Garuda felt sorry for his mother having been made Dewi Kadru’s slave, and he wanted to liberate her. He needed to find the water of life, because it was this holy water that Dewi Kadru demanded as a reward. So Garuda wandered about in the world of the gods. He promised the God Vishnu that he would become his mount if he succeeded in acquiring the elixir. Eventually, Garuda succeeded and freed his mother from Dewi Kadru’s slavery. Although it made me wonder whether this was indeed a happy ending, because now Garuda had to work as Dewa Vishnu’s mount, to redeem his mother’s freedom. Doesn’t that amount to the same thing? But maybe Garuda did not consider this an issue, neither do I. What’s important is that they were together again.

After grandfather had finished speaking, I started thinking whether I could act just like Garuda, in order to free you, Mother? Grandfather says that you work in a country far away. Do you have to work all the time too, just like Dewi Winata, so you are never able to take some time off and return home? I long for you, Mother. I long for the way you cradled me. I am reminded of your voice, how you sang me this lullaby every night:

Tak lelo-lelo-lelo ledhung
Please hush my princess, dry your tears
Oh my beautiful princess
If you cry, your beauty will perish

Mother, I will be like Garuda, who persistently searched for the water of life, in order to redeem you, although I do not know where I may find it. I will ask the people I meet. I will definitely find it and hope, you can afford the patience to wait until we shall meet again, until we are together again.