Hey Tjalie, waer bestu bleven, me long to you, gheselle mijn. [Hey Tjalie, where have you gone? I long for you, dear friend of mine].

Look, they prefer to remember you as Tjalie as it sounds so good. But they aren’t reading you, Tjalie. Your Petjoh, once called ‘pidgin Dutch’, makes for difficult reading without footnotes, but under your other pseudonym Vincent Mahieu they aren’t necessary when you just as easily describe an episode from the Indonesian Revolution as the foolish relation between a European plantation owner and a white parrot. I write you this letter at the request of a group of Belandas, as he often called them, or Batavians, as I will start calling them from now on, as I am sick of the word ‘native’. 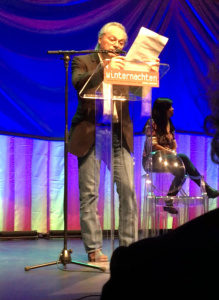 Hey, the Batavians are currently reinventing their colonial history, coming at the same time as the growing aversion to the multicultural soup that just can’t seem to get boiling here, you know, that same mudhole you happened to be born in, Tjalie. Do not grieve, you never met me but I can write to you with certainty that I too was born here, even though I’ve had to explain that all my life because I lack the features of a Batavian.

Here, I don’t know if your friend Hella [Haasse] is with you, but if you see her tell her she no longer can be called blank [clear] but has to be called wit [white]. There is a lot of discussion and uproar about white versus black and vice-versa, which seems to be called ‘debate’. Well Tjalie, they’ve not resorted to beating each other’s brains out quite yet, and as an Indo I always know how to slip past it all, although like you I remain a suspicious figure, not white, yet not black.

Did you know one of the most well-known historians is a Batavian who calls us Indians? I ought to start wearing a turban! In any case, the Batavians are now starting to really believe they waged some sort of war in the Far East… but do they care to take a look at what Indonesians themselves have written about their struggle for independence? No, they’d rather try to reinvent the wheel here. So they go around knocking on the doors of government, begging bowl in hand in the name of royal institutes, and they spend so long whining that those idiots give them millions to go to Indonesia to investigate this dramatic end to four centuries of colonialism.

There are hardly any witnesses left, and without fully mastering the language at all they want to ask them questions like:

‘Sir, is it true that sunburnt Belandas came storming in with guns and tanks? Oh yes? And you? Did you shoot back? You did? Well, if you hadn’t shot back then it wouldn’t have turned into a war, would it now? You remember, in the good old days when a Belanda could pump your body full of bullets and you just had to sit there and take it, right? This is how relations were and we, the superbly educated scholars that we are, like to see everything within the light of that time, you understand?’

Hey Tjalie, I can see you wanting to reach for a tjies! There on the happy hunting grounds! But don’t rush too quickly to your next reincarnation! Wait for me so we can have some fun up there first. To dampen your urge to return our earthly realm, I can tell you now that the Batavians refuse to take note of your razor-sharp essay Nogmaals Oeroeg in a 1948 edition of the magazine Oriëntatie, and that sixty years later a preeminent lecturer and reviewer wrote that, in order to understand Oeroeg, you do not need to understand the context, neither that of the Dutch colonial past nor the Indonesian Revolution. She probably gets her nasi rames from the chip shop on the corner. I mean you can write humorously of course, but seriousness is reserved for these new scholars and their government grants.

[Translated from Dutch by Scott Emblen-Jarrett]