Listen to the Indonesian voices

Dutch East Indies. In order to face our shared colonial history, historians have to open the windows on two sides, according to Anne-Lot Hoek and Martijn Eickhoff.

It is fifty years ago that Joop Hueting “threw a rock through the window” on Dutch national television. Hueting, previously a Dutch conscript soldier himself and sent to the Dutch East Indies, described a series of war crimes that Dutch soldiers committed during the ‘police actions’ (1945-1949), He did so in the controversial broadcast of the Dutch television program “Achter het Nieuws” (Behind the News) of January 17, 1969. The message of Hueting, who passed away at the age of 91 last November, lasted only recently. But where are the Indonesian voices in the debate?

Only fifty years after Hueting’s TV performance, a broad investigation has been launched on Dutch military actions in Indonesia. More insight into one’s own actions is of great importance for a better understanding of the colonial legacy.

But the debate is still mainly about ourselves. There are – important – discussions about the alleged good and evil of colonialism, however, we hardly look over the fence. From Indonesia there are voices that mainly ask for a broader understanding of the colonial heritage, across the national and temporal borders. These Indonesian voices and debates are still very rarely heard in Dutch public discussions, literature, films, media and in historiography. But they are crucial to be able to face the shared history.

Jeffry Pondaag was sixteen years old when he arrived in the Netherlands from Indonesia in the summer of 1969. His family in the Netherlands, uncles and aunts of mixed origin who had left the Indies before, watched the confessions of Hueting on TV, which made them angry. Pondaag could not understand that his family regarded “those Indonesians” as “terrorists”. “We were free on August 17, 1945?”

Unlike his family members in the Netherlands, Pondaag, whose father was an Indonesian, identified with his Indonesian background. He did not have many supporters and he was called a “murderer” on the street.

Since then Pondaag has been asking questions about the legitimacy of the Dutch occupation of Indonesia between 1945 and 1949, which shows the inability to give Indonesian voices a place here in the Netherlands. First the Indonesians were “not yet considered ready” to rule their own country, later they were framed as criminal perpetrators of violence.

As early as 1918, the Javanese nationalist R.M. Soerjo Poetro distributed an election manifesto among Indonesians living in the Netherlands. Poetro called on his fellow countrymen to vote for the party “that stands for the separation of Indonesia from the Netherlands”. He wrote: “The future Indonesian State needs the most essential: the right to self-determination.” Indonesians in the Dutch debate repeatedly argued for Indonesian independence in the following years. It did not have much effect: they were allowed to talk along a little bit, but the Netherlands determined the agenda.

The message of independence that Sukarno and Hatta had pronounced on August 17, 1945 found little resonance in the Netherlands, and it remained so. It resulted in a bloody war, which is framed in the Dutch history books as ‘police actions’. The Netherlands accepted the Indonesian sovereignty only in 1949. “Since the Netherlands is still holding on to this date, those who died from the Indonesian population between 1945 and 1949 were formally still Dutch nationals,” says Pondaag. “Then why are they not commemorated on the Dutch National Memorial day of May 4th?”

It is a valid question: the fallen Dutch soldiers in Indonesia are being commemorated. This proves the one-sided national identification with history.

In the late sixties, through the confessions of Hueting, the Dutch debate moved its focus to war crimes, and that remained the case for decades. That was also appropriate, since the Dutch government had reduced the matter to the so-called Excessennota (list of excesses), which was compiled in June ’69 under the direction of historian Cees Fasseur (1938-2016). As a result, there was little interest in what happened on the Indonesian side. Moreover, the heavy focus on [Dutch] victimization opposes the [Indonesian] ideal of freedom during the revolution, to which Dutch historians pay almost no attention.

The Indonesian journalist Aboeprijadi Santoso (1947), who came to the Netherlands in 1967, saw the war crimes debate mainly as “a matter of shame and lost honour by the Dutch army.” In Indonesia there were other pressing issues at the time: the mass murder of alleged communists (1965) and later the violence in East Timor. Important to him is the continuity, “the effect of normality” of the violence, instead of the details. First the Aceh-war, then the revolution, the Dutch war crimes, and then Suharto.

But also ‘65’- with 500,000 Indonesians killed – was virtually being ignored in the Netherlands. Economic interests and a good relationship with the new president Suharto prevailed. There was no room for questions about continuity and discontinuities in the shared history. When Hueting took a position in the debate four years later, it was not only the Dutch military that objected an investigation into Dutch war crimes, but also from Indonesia. For example in Dutch newspaper De Telegraaf of January 30, 1969, the Indonesian ambassador in the Netherlands, General Taswin Almanik Natadiningrat, said that the Netherlands “were not guilty of systematic terror” and that “digging in the past” was not good for the relationship.

The history of Indonesia and the Netherlands is thus recorded along strict national lines in both countries. The Dutch debate is about “colonialism in crisis”, says Ariel Heryanto, professor of Indonesian Studies at Monash University in Melbourne, in Indonesia the emphasis is on “anti-colonialism”, the national unity of the revolution, “only a few people know that a country like Australia also supported the Indonesian revolution. ”

Taking accountability for the crimes is important, and Hueting’s words are finally taken seriously. But only by looking across national borders, listening to Indonesian voices and also having an eye for the long-term effects of colonialism, Indonesian and Dutch experiences – in books, films, debates, media and historiography – will fit together better. It is a task that academics and opinion makers should take into consideration.
— 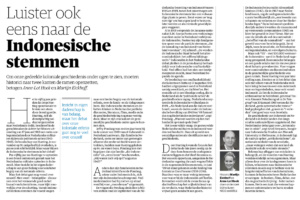