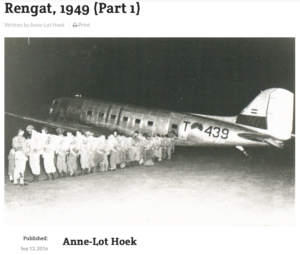 The band, trumpets and drums sound from afar as I walk towards the memorial service in the centre of Rengat, a small provincial town in central Sumatra. All kinds of people are lined up in front of a monument next to the wide, brown Indragiri River: officials dressed in ceremonial or military uniform, police officers, school children, teachers and veterans. The ceremony for the Rengat Event (Peristiwa Rengat) begins with several speeches about Agresi Militer Belanda, one of the major Dutch military offensives against the Republic of Indonesia during the Indonesian Revolution. The district head places a garland at the monument. After the service the whole crowd moves to the riverfront to spread flowers in the water. They allow me, a Dutch person, to do so as well.

Seventy-one years ago, right after the Second World War, the nationalist Sukarno proclaimed Indonesian independence on 17 August 1945. A bloody guerrilla war erupted soon afterwards with former coloniser, the Netherlands.  One hundred and forty thousand Dutch troops arrived between 1945 and 1949 to restore ‘law and order.’ Almost an equal number of people died, leaving Indonesia in a state of civil war. The Rengat Event was an attack by paratroopers of the Dutch special forces (Korps Speciale Troepen) on Sumatran citizens. It took place on 5 January 1949, at the end of the ‘Second Police Action.’ According to Indonesian sources, almost 2000 people died, while Dutch documentation estimates around 80. Yet this violent story finds no place in the national memory of either country. …