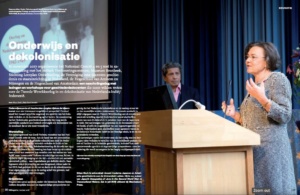 Early this past November, under 4/5 May Committee sponsorship, the Bronbeek Museum hosted a remarkable day of lectures and workshops on the teaching of “War and Decolonization in Netherlands-Indies/Indonesia,” enriched by the presence of education experts from neighboring countries who provided a fascinating comparative perspective. If there was one takeaway message, it was the shared ubiquity of empire in our histories and presents—and the need to overcome a shared reticence when it comes to teaching it.
In her opening address to the plenary session, 4/5 May Committee chair Gerdi Verbeet set the tone with a personal anecdote that highlighted the political fault lines perennially running through Dutch reckonings with their former colony and its ending in the bloody decolonization war of 1945-1949. She recalled a high school history teacher who loved to tell romantic personal stories of “ons Indië,” and blamed the “communist” Sukarno for its “loss”; her own awareness at the time, as child of a socialist household, that imperialism was wrong; a classmate whose father had fought in the Dutch colonial army (KNIL) who rather agreed with her teacher; and her own father, who had also served in the war but “never talked about it to anyone in the family,” preferring to try to put its horrors behind him.
As noted by Verbeet and other speakers including historian Remco Raben and high school curriculum developers and Cees van der Kooij and Paul Holthuis, such traumas and contrasting perspectives and investments have engendered a relative silence in the way empire and its aftermath are taught in the Netherlands. The predominant narrative of the Second World War has remained the “easy,” black-and-white one of victimization at the hands of the Nazi Germans “at home” and, to a lesser extent, at the hands of the Japanese in Asia. The “grey areas” in between the black and white, or even the possibility of a role-reversal implied in acknowledging a Dutch role as victimizers in colonial Indonesia and its violent ending, have up to now been largely avoided.
As a way forward, all agreed on the need to expose students to the voices and narratives of multiple participants in history and their often competing agendas and perspectives—an approach summed up in the word “multiperspectivity.” A full report on this fascinating workshop was published on the Euroclio website under the title “Teaching the Ends of Empire”. 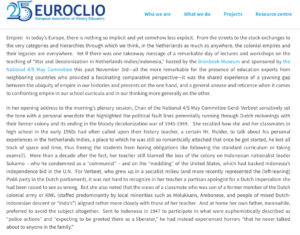 Ethan Mark is senior lecturer in modern Japanese and Asian History at Leiden University. His book ‘Japan’s Occupation of Java in the Second World War: A Transnational History’ available via Bloomsbury Press: https://www.bloomsbury.com/uk/japans-occupation-of-java-in-the-second-world-war-9781350022218/