Dutch research, expo Rijksmuseum, TV-series VPRO: they are all connected! 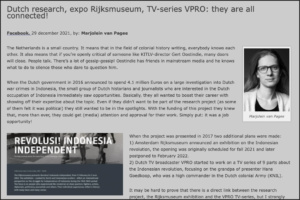 The Netherlands is a small country. It means that in the field of colonial history writing, everybody knows each other. It also means that if you’re openly critical of someone like KITLV-director Gert Oostindie, many doors will close. People talk. There’s a lot of gossip-gossip! Oostindie has friends in mainstream media and he knows what to do to silence those who dare to question him.

When the Dutch government in 2016 announced to spend 4.1 million Euros on a large investigation into Dutch war crimes in Indonesia, the small group of Dutch historians and journalists who are interested in the Dutch occupation of Indonesia immediately saw opportunities. Basically, they all wanted to boost their career with showing off their expertise about the topic. Even if they didn’t want to be part of the research project (as some of them felt it was political) they still wanted to be in the spotlights. With the funding of this project they knew that, more than ever, they could get (media) attention and approval for their work. Simply put: it was a job opportunity!

When the project was presented in 2017 two additional plans were made:
1) Amsterdam Rijksmuseum announced an exhibition on the Indonesian revolution, the opening was originally scheduled for fall 2021 and later postponed to February 2022.
2) Dutch TV broadcaster VPRO started to work on a TV series of 9 parts about the Indonesian revolution, focusing on the grandpa of presenter Hans Goedkoop, who was a high commander in the Dutch colonial Army (KNIL).

Researchers like Anne-Lot Hoek and Remco Raben play double roles too. Apart from participating in the Dutch research project, they also contributed to write the book ‘Revolusi! Indonesia Independent’ that Rijksmuseum is going to publish in February.

Remarkably, Indonesian historian Bonnie Triyana (Editor in Chief of Historia) was in the Netherlands when the Dutch research project was launched in September 2017. I saw him at the kick-off event. Although he distances himself from the research project, he didn’t visit the Netherlands only for holiday. Just a few days before the kick-off event he met with Harm Stevens, the curator of Rijksmuseum. Later in September 2018 Bonnie spoke at the second public meeting of the research project. He never joined the group of critics that question the research outline, let alone that he signed the open letter of Jeffry Pondaag and Francisca Pattipilohy (Actually, Pondaag was allowed to say a few words at the second public meeting too, however Francisca Pattipilohy was ignored by the researchers as if they didn’t write the letter together.) Whereas Pondaag was very vocal about the colonial approach of the project, Bonnie Triyana’s speech in September 2018 was not dangerous for the researchers at all.

Earlier in 2017 he also gave an interview to national broadcaster NOS, when they presented the new research project in favor of Oostindie. Bonnie then said that Indonesia had to learn more from the so-called Bersiap. (Dutch term for Indonesian anti-colonial violence.) This is exactly what the Dutch want Indonesians to say as it smoothens the unequal power relations, framing 1945-1949 as an event in which ‘two parties fight’.

To be clear: Amsterdam Rijksmuseum is funded by the Dutch state too. The word “rijks” means state. They’re the museum of the state! When Pattipilohy, Pondaag and I met curator Harm Stevens he told us that the museum, therefore, cannot take a position when it comes to war crimes. He admitted that, because they’re part of the structure, receiving government funding, they were bounded to stay neutral.

If that is the case, then what to expect from this exhibition? If the Dutch are still not ready to condemn colonialism as a human rights violation, then what is the point of creating all this attention for 1945-1949 through public events, books, including the exhibition?

I think Saut Situmorang is right when he talks about: ‘Proyek Revisi Sejarah Kolonialisme Belanda (Project for Revision of the History of Dutch Colonialism). This revision-project is big and has three parts that all ignore Jeffry Pondaag/KUKB/court cases. At least all of them do not acknowledge that it was because of the pressure of the court cases that the Dutch government decided to fund the large investigation as a way to feign responsibility. 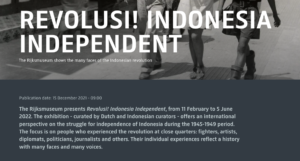 On Tuesday 11 January (10 am CET) the Rijksmuseum will held a press conference. On the website below you can read their announcement of the content of the exhibition.

What strikes me is the use of the colonial concept of ‘multi-perspectivity’ or ‘multi-vocality’. Currently in the Netherlands it is common to say that a variety of different perspectives on colonialism exists and that all these different voices count. Yet, the idea of ‘multi-perspectivity’ does not eradicate colonial and racist thinking. Pro-colonial views are not condemned or seen as unethical. Therefore, multi-vocality is avoiding the discussion on what is right and what is wrong. It is also avoiding the discussion on the colonial structure and unequal power relations.

In the text on the website of Rijksmuseum they talk as if we were all ‘one happy family.’ As if it is about individual stories and not about analyzing the system of oppression in which white Dutch people formed the top elite.

Read for example this sentence: “Their individual experiences reflect a history with many faces and many voices.” And: “the experiences of 20 individuals – each at a different location, and each with their own background and political standpoint.”

This is not how you analyze a system of oppression!

For the same reason you cannot present the court cases of K.U.K.B. as just one of the factors that fueled the debate on Dutch war crimes in the Netherlands. Jeffry Pondaag and Rémy Limpach (historian who works for NIMH, an institution that falls directly under the Ministry of Defense) are opposites. Limpach is helping the Dutch to revise their history in an acceptable, comfortable pro-colonial way.
—
https://www.rijksmuseum.nl/en/press/revolusi-indonesia-independent