Oostindie: “The Idea that I condone Colonialism is absurd”

As the co-initiator of a major investigation into the Dutch military actions in Indonesia (1945 – 1950), historian Gert Oostindie is being criticized. Among others anthropologist Gloria Wekker is convinced that the researchers are aiming to condone Dutch war crimes. In Historisch Nieuwsblad, Oostindie says he finds the criticism shocking and absurd.

Last year, partly due to the insistence of Oostindie, the Dutch government funded a large-scale investigation into the decolonization war in Indonesia. Some scientists and activists, however, have no confidence in the project and the people conducting the research. For example, anthropologist Gloria Wekker publicly stated that the research is set up in such a way that the in advance conclusions will be favourable for the Dutch.

“I was really shocked by her statement. How can she say that? “Oostindie responds in an interview with Historisch Nieuwsblad. “People can be endlessly occupied with my presuppositions and perspectives, and I have to think carefully about that, but in the end the research was assigned to three institutions because of the expertise there.”

The research is carried out by the Dutch Royal Institute for Language, Country and Ethnology (KITLV), of which Oostindie is the director, the Institute for War, Holocaust and Genocide Studies (NIOD) and the Netherlands Institute for Military History (NIMH). Oostindie writes a summary of the results, which will be published in 2021.

In the interview with Historisch Nieuwsblad, Oostindie elaborates on the design and the importance of the research. He argues for a ‘nuanced story’ about the Dutch colonial past. “That is more realistic and convincing than a moralistic black-and-white version. I want to create something that is useful for society. I cannot achieve that goal by being politically correct in an ivory tower.”
— 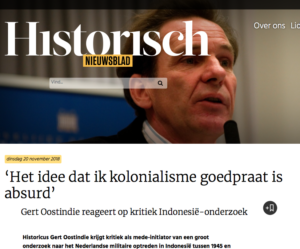