The illusion of apologies from Dutch King Willem-Alexander

This recent event reminds me of Mrs. Tijeng, a 90 years old widow from Balong Sari Rawamerta, Rawagede, Karawang. At the end of 2016 I met her together with the Dutch human rights lawyer Liesbeth Zegveld .

Due to her age, she could not see very well and had difficulty to walk. She had been a widow for nearly 70 years. Her former husband was executed by a Dutch soldier on the 9th of December 1947, during the Dutch Military Aggression between the years 1947 and 1949.

Her husband, Nimung, was killed in the afternoon, only 500 meters away from his house. Because of the [Dutch] terror Mrs. Tijeng could not carry her husband’s corpse until the afternoon on that day.

“I dug his grave with my own hands” she said to complete the story. 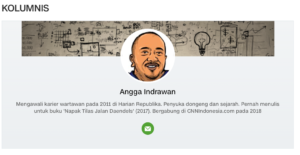 Tijeng is one of the nine people who received damages from the Dutch government. The Court of Justice in The Hague granted her assertion in 2011. Tijeng then received 20,000 euros, which equaled Rp. 250,000,000 at that time.

Liesbeth Zegveld, from the law firm ‘Prakken d’Oliveira’, was the lawyer on behalf of the claimants. The foundation Komite Utang Kehormatan Belanda (K.U.K.B., the Dutch Debt of Honor Committee) facilitated them without any help from the Indonesian government. Later, D.A. Schreuder, the main judge of the court, ruled that this was an illegal action (onrechtmatig).

“Some claimants have received damages, but there are still a lot of ongoing cases” says Liesbeth when she replies the e-mail that I sent her.

Willem Alexander, King of the Netherlands, visited Indonesia on Monday March 9. He did not address the issue of these ongoing court cases, he only expressed apologies.

“In line with earlier statements by my government, I would like to express my regret and apologies for the excessive violence on the part of the Dutch in those years,” said Willem-Alexander in front of Jokowi.

The apologies are meaningless, as long as [the King] ignores the cases of violence against Indonesians that are being handled by the Court. According to the Dutch Debt of Honor Committee, 433 legal claims have been registered by court in The Hague, from which 72 cases were rejected based on the argument that the statute of limitations has passed.

“These are the cases in Sulawesi, Sumatera, Central Java, including the ones from Rawagede and Rengat,” says Jeffrey Pondaag, the K.U.K.B. chairman.

Yvonne Rieger-Rompas, researcher involved in the K.U.K.B. cases, explains that only 43 of the legal claims have been granted. “(They include) forty widows, two victims of violence and rape in Rawagede, and one other victim of torture in Malang,” says Yvonne.

It is hard for me to accept this is as a sincere apology. Instead, I think it is just a way for the Dutch government to alleviate all the remorse about the Netherlands’ past actions in Indonesia. To this date, the Dutch have never acknowledged Indonesia’s Independence on 17th August 1945 or even admitted the acts of aggression towards Indonesia’s sovereignty between the years 1945 and 1949.

The moral and political acknowledgment in 2005, regarding the 17th of August of 1945 Proclamation, was also fraught with hypocrisy and dubbele moraal [double standards]. As it is known, the statement at that time was conveyed by the Dutch Minister of Foreign Affairs, Bernard Rudolf Bot, on the 16th of August in 2005, at the Department of Foreign Affairs in the presence of [Indonesian] Minister Hassan Wirajuda. When taken into account the way the [Dutch government] handles the Rawagede lawsuits until Westerling’s deeds became proven, makes it hard not to see the hypocrisy.

Not to mention that in 2016, the Netherlands started a large historical research project regarding the 1945-1949 period. Main motive: to claim that what the Dutch army did was only an excess of their policy, which was called a police action (Excessennota, Cees Fasseur 1969). The term police action refers to the definition of restoring order, which aimed to paralyze disrupters.

As reported by Historia, the project received 4.1 million euros [Dutch government] funding. The research will be conducted by three [Dutch] institutions, consisting of KITLV (The Dutch Royal Institute Linguistics, Geography and Ethnology), NIOD (the Dutch Institute for War Documentation, Holocaust and Genocide) and NIMH (Dutch Institute for Military History).

The research is still ongoing and is targeted to be completed in 2021. The research project builds a narrative around het Indonesisch geweld [the Indonesian violence.] As Dutch Prime Minister Mark Rutte announced on December 2nd,  2016, after his government decided to support the proposal of this project.

Meaning: “What I found important is that the Bersiap period (1945-1949), thus the Indonesian violence, will be investigated too. That was also agreed upon. I also spoke with the Indonesian president about the importance of us working together”

Rutte also stated that the research project departed from the questions of Rémy Limpach’s doctoral dissertation. Rémy proved that the violence of Dutch soldiers during the Indonesian war of independence was systematic and structural. His book, De brandende Kampongs van generaal Spoor (The Burning kampongs of General Spoor, 2016), proves this.

What is the value of the apology by the Kingdom of the Netherlands?

Dutch military reports, compiled after the Bersiap period, estimated that 97.421 Indonesian died during 1945-1949. This number was also confirmed by Dutch historians. For example Loe de Jong, in his book Het Koninkrijk der Nederlanden in de Tweede Wereldoorlog, Volume XII (The Kingdom of the Netherlands during Second World War, Volume XII, 1988) wrote the exact same number. The latter estimation includes information that was submitted by the Indonesian delegation to the United Nations, in relation to the 40 thousand fatalities from Westerling’s atrocities on Sulawesi.

In the past, during colonial times, there was no rupiah yet. Hereby a simple calculation to give you an idea about the amount of money that the Netherlands requested [in 1949]. See for instance the construction of 750 Gedung Sate in Bandung, which costed 6 million guilders in July 1920. Or, take for example the construction of 12500 het Paleis te Koningsplein (now Merdeka Palace) which costed 360,000 guilders in 1869, the building that is currently used by Jokowi.

What would be the exact amount if we convert it to current rupiah?

Thus the value of the apology of the Netherlands equals Rp 504 trillion.

Let us think about the idea that this money should be returned to the people of Indonesia.

We should tell the Dutch that “Sorry zeggen is niet genoeg” (Saying sorry is not enough.) As Van Vugt wrote in his book Het dubbele Gezicht van de Koloniaal.
—