The Interpreter From Java Review: A Post Colonial Masterpiece That’s Not To Be Missed 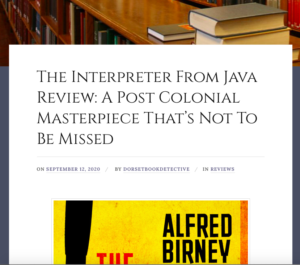 The opening sentence of The Interpreter From Java is a little over a page long, and outlines a list of horrific crimes committed by the narrator’s father, the titular interpreter, decades before.

Punctuated by commas, the sentence runs on and on, giving the reader overwhelming feelings of claustrophobia and revulsion, which quickly become a theme throughout the novel.

Written by Alfred Birney and translated into English from the original Dutch by David Doherty, The Interpreter From Java is an intriguing novel told in two halves. The first half is in-depth review of the Indonesian war for independence from Allied rule in the 1940s. Told from the perspective of an interpreter who worked with the marines, this half of the novel is intriguing and enlightening.

The other half of the novel is told from the perspective of the interpreter’s son, Alan, who writes his own story as well as interjecting into his father’s memoirs to remind him of his cruelty and mistreatment. Alan spent half his life scared witless of his father, and the other half in a children’s home facing institutional racism, sexual exploitation and more. The novel dips into each narrative, sometimes tracing large chunks of the memoirs and Alan’s life, other times flitting between the two, so the reader is captivated by the two stories at once, and the lines between the past and the present blur together.

Through this tale of family betrayal and abandonment, Birney highlights the merciless battles that plagued colonial Indonesia and its inhabitants. It also emphasises the identity issues that the children of colonial imperialists and local individuals face. Arto Nolan (he adds the d himself later), Alan’s father, is the illegitimate son of a European colonial businessman and his Chinese concubine living in Indonesia. He isn’t acknowledged by his father, yet he remains a fanatical supporter of the Dutch occupation, and eventually becomes an ‘interpreter’ for the Allied forces, acting as a cross between a local guide and a cold-blooded solider.

The section of the novel that Birney devotes Arto’s memoirs highlights the stark irony of a man who lambasts native soldiers for killing innocent people in the name of liberty, while at the same time committing equally heinous crimes in the pursuit of imperialist greed.

The author emphasises the complicated nature of the relationship that some of the region’s inhabitants had with their identities and how this impacted on colonial rule. He explains how Arto began his crusade against the Japanese invaders, then became a solider for the Allies out of his misguided belief that the Westerns were somehow more civilised, and that their violence served a higher purpose. In this regard, the author showcases the complicated politics of colonialism, and how it was branded to make those who were being invaded believe that they were actually being saved.

In the half of the novel dedicated to Alan’s depiction of life after the war, in which Arto has swapped guns and war for domestic abuse and spending his evenings typing away on an old Remington typewriter, Birney proves that these identity politics extend beyond colonialism. Alan and his brothers and sister are a partially Dutch, partially Chinese but many with darker skin and all with an incomplete understanding of their heritage. Alan describes them as ‘Indos’ at times, and at others as Dutch. He doesn’t understand his heritage, despite trips to meet his extended family on the other side of the world and his raking through his father’s memoirs in search of answers.

Every sentence of this remarkable novel is designed to grab the reader by the throat, shake them awake and keep them that way. The opening line is a continuous list, and the entire novel is an exploration of colonial crimes and the lasting harm that the various European empires caused to multiple generations. It’s not just Arto and those who lived through the occupations that were scarred; his children, and his grandchildren also suffer endure fractured identities and the mental weight that serious abuse has on children.

Overall, The Interpreter From Java is a long and arduous read, but it’s also informative, insightful and enlightening. If you’re looking to broaden your mind and learn more about the affects of Colonialism on the generations that came long after the world’s empires were demolished, then this is the book for you. It’s well worth reading for curious readers.
—
On September 3, 2020, the London-based publishing house ‘Head of Zeus‘ released ‘The Interpreter from Java’, translated by David Doherty: