Surviving Dutch violence: Indonesians affected by Dutch military violence have remained unnoticed for a long time. “It is still an unresolved issue”.

Soeloeng Hamonangan Nasoetion (1941) was seven years old when he witnessed Dutch soldiers forcefully arrest his father on December 20, 1948 in Kaliurang near Yogyakarta in Central Java. His father, Masdoelhak Nasoetion, was a prominent advisor to Mohammed Hatta, Vice-president of Indonesia.

Masdoelhak was shot dead by the Dutch. The soldier was never prosecuted. Soeloeng’s mother started a legal process and in 1953, she was the first Indonesian war victim who succeeded in arriving at a legal settlement with the Dutch state. In the eyes of the son, does that mean justice was done? How does a child look at the adult world?

According to Soeloeng Nasoetion, “The murder of my father was not a topic of conversation in our house.  Of course, my mother was very involved with it, and with the legal process.  But for us, the four boys, we only experienced what happened that day in Kaliurang—we didn’t understand it at that moment. We were much too young for that.”

“It just happened. Dutch soldiers knocked on the door. I was home with my two little brothers.  My mother was in the hospital in Yogyakarta where she had just given birth to my youngest brother.”

“My father opened the door. Got a gun pointed in his face.  And there we stood in shock, wondering what was happening. But not much really happened. Cabinets were thrown over. Drawers were pulled out. And then they took off with my father. My father had time to tell us: ‘Take care of your mother, take care of your brothers.’ Those are the last words he ever said to me. We were glad that we got our mother back a few days later.”

“That was actually the whole story. We moved from Kaliurang to Yogya on the 2nd, 3rd, or 4thof January; I don’t remember exactly.  I also don’t remember how long we lived there. I remember well the pigeon that was always on my shoulder, in Kaliurang, and then when we moved to Yogya. When we later went to my grandmother, the pigeon came along to Sibolga. That pigeon was the only thing I had.”

“It must not have been easy for my mother. Indeed, we understood that. But it wasn’t something to write a book about. Yeah, something happened. Dad wasn’t around anymore. Would he come back? We didn’t know. Our world had changed.”

“We finally ended up in Bandung, in 1950. When the Dutch schools closed in 1958, we were sent to the Christian boys’ boarding school in Zeist. Later I went to Kiel in Germany, where my mother, in the meantime, had started work as a radiation expert.  There I wrote my final high school exams, continued my studies, and married. I started a business career in Indonesia. For some time now, my wife and I have been living in Germany since our three children and our eight grandchildren live here.”

“Many things didn’t become clear to me until later.  For example, after my father was taken away, the soldiers came to get me.  I had to walk in front of them to patrol (the volcano) Merapi.  Kaliurang lies high on the slope of the volcano.  I don’t recall thinking it was dangerous, only that they said, ‘Walk in front of us.’  They wanted to go up the mountain.  Later, when I was older, I thought, ‘My God, they let me walk in front so that nothing would happen to them.’  But I didn’t think of that at the time.

“I’ve never thought of contacting the man who shot my father.  For years, I never knew his name.  But that’s all been found out now.  So now I know that it was a sergeant major Geelhoed.  When I heard that, there was no part of me that wanted revenge taken against him.

“I’m not opposed to the new research that’s being done about this period.  For the descendants in Rawagede and all the other places where Dutch soldiers killed people, it’s not a bad thing to have some closure, to know why something was done. But I don’t know if the research is achievable.  So many bad things happened.  The question is, how far do you want to go to figure it all out?

“Was justice done in my father’s case?  What can I say?  If I were ever to meet the perpetrator, there is nothing that I would want to do.  I would never tell my neighbour that there’s the man who killed my father.  Even though my mother received compensation, the government lawyer still said, ‘We are not responsible.’ And my mother said, ‘You are definitely responsible.’  I can’t force the Dutch state to acknowledge responsibility.  If they gave it to me in a written declaration, I’d accept it.  With such a declaration, the case would be settled. Now it’s always still unresolved.

“My father wasn’t a big man. You could have fun with him. I enjoyed taking walks with him.  He came home one day in Kaliurang and said to the gardener, ‘Could you take that animal out of the car?’  Suddenly, a loud yell!  The gardener was scared silly because of the enormous eel in the back of the car.  It was dead of course.  My father had caught it.  He loved to hunt and this was his catch.

“I often went with him when he went deer hunting. Now they’re rare there, but there were loads of them at that time.  Merapi Mountain was wilderness right to the peak. Now nothing grows there except vegetables and you never see wild deer anymore.

“One day he came home with two ducks.  He said, ‘Here, these are yours.  Now we just have to build a pen.’  So that says something about him.  He knew how to make good use of his time.  When he was home, he was home.  He was there for us.” 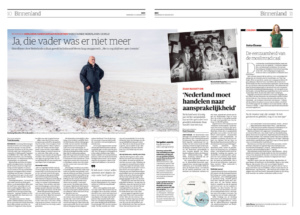