He found one of the victims from torture in Sutojayan 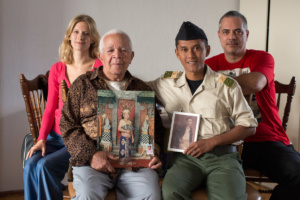 Max is interested in the history of Dutch colonialism in Indonesia. This Dutch blogger went to Indonesia to find out what his ancestors did in Indonesia and also to build reconciliation between our two nations. “Forgive, but never forget.” That’s what Max said when I asked him about his motivation to do this research in Indonesia. Last Saturday night October 12, he is excited to explain about his goals and his project.

Max arrived in Indonesia on October 7 and visited some cities in Java. This was his second visit to Indonesia. “I started my trip in Bandung” Max explains, he is wearing a black t-shirt with a Dutch and Indonesian pin on his chest.

He started his research after september 2011 when he read about the decision of the court about the case of Rawagede massacre. In that case, the court in den Haag decided that the Dutch government had to financially compensate 7 widows in Rawagede who are still alive, the incident took place at Rawagede village, Karawang, West Java, 1947.

On september 12 2011, Dutch ambassador in Indonesia Tjeerd de zwaan officially apologized for that incident. “The Rawagede case was a wake-up call for me, I’m sure there must be other similar cases which are still hidden in Indonesia” says Max.

In his whole life this man, who is working as a business consultant, has always been interested in history. He even collected some Dutch documents as proof of very bad things, such as massacres in Indonesia. For instance he has photos of executions of Indonesians committed by Dutch troops.

The documents moved his heart and encouraged him to take action: go to Indonesia to find the facts. His first visit was in 2011, after the Rawagede trial. “The first place I visited was Bandar Buat (Padang) and Sutojayan (Malang)” this father of a son and a daughter explains. In Bandar Buat there was a Dutch airstrike. While using a Mustang airplane, they bombed a traditional market. Hundreds civilians died during that incident in 1947. And at Sutojayan village, the Dutch troops burnt down the village and also tortured some villagers. Max found one survivor, even until today we can see his wounds caused by Dutch torture.

During the attack on Sutojayan village, there were three Marines who didn’t obey the order, they refuse to put the village on fire. Max also became friends with the family of those three Marines.

After his first trip to Indonesia, Max met Marjolein van Pagee, also an independent researcher who has the same interest about the Independence war in Indonesia. Marjolein did research in Indonesia about the Police Actions together with Ady Setyawan. Our newspaper also covered about her research and trip. We interviewed this young woman who was born on May 2, 1987 at Ady Setyawan’s house.

Through Marjolein, Max got to know Ady. So during his second visit to Indonesia, Max did his research together with Ady. Both of them have the plan to publish a book called: “Excessennota 2015”, with “The last victim.” as subtitle. “We want to write history from both sides, Dutch and Indonesian” Max says. Last September Ady went to the Netherlands to interview Dutch veterans as well.

Max and Ady have the plan to launch their book in 2015. Why wait for 2 more years? “It will be 70 years since Indonesia got independent, and we need to collect more prove to make our book more accurate and detailed, not just only telling stories” explains the man who was born in Arnhem, January 1963. This book will also be an attempt for reconciliation between our two nations. They intend to write fair content, from primary data (interviewing both sides involved) and secondary data (archives and photos) from both sides.

Before this, Ady and his friends from Roodebrug Soerabaia community (who has interest for history) also did the same thing: interviewing veterans of the Independence war in Indonesia. Max expects that their book will be a first step of reconciliation between the two nations. “We must forgive what happened in the past but we should never forget, because that’s the part of our history” Max says.

For Ady as an Indonesian, doing such a thing is easier than Max, because many groups in Dutch didn’t like Max his project. Max has interest in this case because of his family history, his grandpa was a KNIL soldier who was sent to Indonesia and later married an Indonesian woman, from them Max Senior was born.

“My grandpa and father never told me about their story in Indonesia, every time I asked him he always replied that he didn’t remember” says Max.

In 1956 my father moved to the Netherlands, and one day Max found an old photo of his father with complete TKR uniform with caption bandung 1946. “My father already passed away, I can’t ask him the story behind his uniform.” This mystery inspired him to look closer to the Dutch war in Indonesia. Also because of that photo Max started his journey in Bandung.

Some of his journey experiences are written on his blog www.7mei.nl. He chose to use 7 Mei as his blog’s name to honour one of the Rawagede survivors: mr. Saih bin Sakam, this man passed away on May 7 2011, only 4 months before the court decided that the Dutch government was guilty.

Although the book will be released in 2 more years, Max feels that he must finish his history project. Because the witnesses and the veterans are too old. “They will not live forever, when all of them passed away where can I get the stories?” Max says. 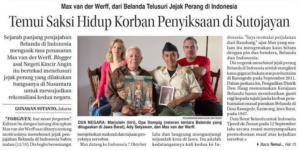 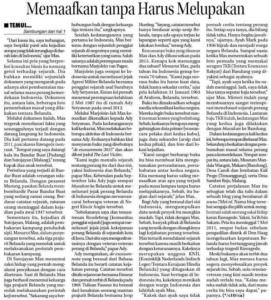 [Originally published in Dutch. Translated by Ady Setyawan and Marjolein van Pagee. Please send us an e-mail if you think you can improve the translation: info@historibersama.com]