What if Nusantara [the Indonesian archipelago] was never colonized

Here are the scenarios that could have happened to our nation.

This counterfactual historical review departs from the scenario that the Portuguese and Dutch only came to the Indonesian archipelago for trading in which the Japanese never became aggressors. VICE talks with historians and tries to imagine the effect [of a different course of history.] Would modern Indonesia exist?

What if the Foreign Investment Act of 1967 was never signed, what if the Supersemar/ Order of 11th March did not exist, what if Soekarno never declared himself president for life, what if Indonesia never declared its Independence, what if Nusantara [the Indonesian archipelago] was never colonized….perhaps we would live in a completely different place, with people with a totally different character.

What would happen if Indonesia had never been colonized at all? Several internet fora, like Quora, raised this question before. Some are wondering: what if the Portuguese never made it to Malacca in 1511 and the Dutch never followed them up and made Nusantara their colony, then presumably Indonesia would never exist. In all likelihood there would have been a series of small countries with their own regional and ethnic identities, and they would probably fight each other or frequently get into conflict like other continental countries that live on one landmass. Some suggest that Nusantara would perhaps be unified under one sultanate system. Each region would probably use their own regional dialects in a variety of characters.

Within the field of history this “counterfactual method” is sometimes seen as an escape. Some are reluctant to call it “history” and refer to it as “speculation”. Some even say that counterfactual history is outdated, a waste of time, or even “misleading”. However, nobody can deny that counterfactual analysis is indeed fun. As long as the analysis is debatable and can bring out other historical facts. Therefore, the search for multiple possibilities and alternative historical scenario’s (such as what if Indonesia was never colonized) has attracted my attention.

I chatted with historian Andi Achian who is familiar with the counterfactual method, to find out about possible alternative scenario’s for modern day Indonesia in case it was never colonized. Andi replied that without colonization he find it likely that Nusantara would have been more advanced in terms of industrialization. The coastal cities would have been more developed due to trading. The most prevalent effect of colonialism (especially during the Dutch era) is related to industrialization and trading. Andi emphasized that economic domination of the VOC and the Dutch East Indies hampered the progress of local economies. “The negative aspect (of colonialism) hindered the economic progress of local societies. For example if we look at the city of Surabaya [at that time] there were already several signs of pre-industrial development,” Andi explains. “They already had complex social systems comparable to Europe in the 17th century.” Since the main trading route via Malacca was conquered by the Portuguese and the Dutch, the indigenous traders could no longer continue their trading. When the Dutch started to expand their massive spice trading in South East Asia in early 16th century, the competition for its exploitation drove up the prices in Nusantara. On the other hand, the abundance of spice supply in Europe drove its price down. That led to huge profit margins for the Dutch. Therefore, they set up the Vereenigde Oost Indische Compagnie (VOC) to further monopolize the spice trade in Asia. The latter domination, as documented by historians, was achieved by means of bloody conquest, which involved rifles and warships.

This situation barred indigenous people from developing a modern industry in Nusantara. “They were forced to give up their trading area. They were put under the control of the VOC and eventually died,” says Andi. This is in stark different in comparison to British colonies. The British Empire aimed to turn their colonies into markets. Automatically, their mission was to create a middle class that could spend money. One of the ways to increase the access to human resources. The Dutch on the other hand were traders without reputable industries. Therefore, the main policy of the Kingdom of the Netherlands was to monopolize the trade of commodities in Nusantara and sell the items in Europe.

But Andi comes up with more possible scenarios. In case Nusantara would not have been colonized, it is highly likely that Indonesians would not feel inferior toward foreigners, Caucasian in particular. Further, Indonesians tend to perceive all products from overseas as superior to local products. People even take pride in having a white spouse, perceiving them as more intelligent, more logical, and more absurd: wealthier as well.

In social life the legacy of the brief Japanese occupation is visible too. Our social system that we know in present days, like “Siskamling” (Sistem Keamanan Lingkungan, [civilian] Neighborhood Security System), “RT/RW” (Rukun Tetangga / Rukun Warga, a neighborhood Security System with rigid supervision) and our military system are all legacies of Imperial Japan. And not to forget we also inherited Japanese habits that I often questioned, such as the flag ceremony and respect for the flag.

“We also inherited the Japanese attitude of total obedience towards the state. People are expected to follow their leaders without questioning them, as the state cannot be criticized,” says Andi. “Under Dutch colonial rule, there was still room for criticism, the concept of public and democracy still existed. Yet under Japanese rule such privileges didn’t exist. We inherited the belief that we have to blindly obey those in power.”

Many historians link the strong military rule of Soeharto’s ‘New Order’ regime to his military training by the Japanese, not the Dutch.

Apart from these speculations, colonialism “contributed” to the rise of an intellectual generation which later led to the independence movement in the entire archipelago.

The famous Indonesia-expert, Ben Anderson wrote in “Indonesian Nationalism: Today and In The Future” that the Indonesian existing territory is a legacy of the former Dutch colony the East Indies after they finished their last conquest in Aceh, South Bali, and Papua. It means that geographically Indonesia is a continuation of the former ruling colonial power.

Only the collapse of Dutch colonialism in Indonesia, and European colonialism in general, led to the formation of modern Indonesia as we know it. According to Ben Anderson Indonesia was also created due to the wave of nationalism throughout Asia where citizens felt that they had a common goal and future.

“…the youth at that time used their regional identity not in the name of separatism, but rather as a sign of their regional commitment that united colonized areas in which liberation was their common project. They no longer cared about the fact that the Aceh kingdom once “colonized” the coastal Minangkabau or that the Buginese previously enslaved the hill tribes of Toraja, or that the nobilities of Java tried to conquer the Sundanese highland, or that the Balinese maharaja successfully occupied Sasak island.” (Indonesian Nationalism: Today and In The Future, page 6).

Therefore, if there were no Dutch who conquered those regions, it would be impossible for each region to join [in one nation state.] It is highly likely that each kingdom set up their own sovereign state. The Aceh Sultanate, for example, already had diplomatic ties with several Asian and European countries before the independence. The point is, that under Dutch control at that time, nationalism became the basic logic for the creation of modern Indonesia as unitary state.

However, regardless whether Nusantara was colonized or not, the collapse of European colonialism was a necessity. The concept was later replaced by what Soekarno feared the most: neo-colonialism and neo-imperalism. A historian from IAIN Palangkaraya, Muhammad Iqbal, explained interesting facts about the collapse of the European colonial powers. Second World War II cost a large amount of resources, many European countries were on the brink of bankruptcy. With the arrival of the United States and the introduction of their “Marshall Plan” (1947-1951) the European countries received funds which they needed to rebuild their countries.

“The Marshall Plan shows that West-European colonialism was abandoned, Iqbal said.” They [the United States] came with their economic system that brought countries in debt. The US saw that potential. They believed that they were the best democracy, in which the free market played a big role.”

In the end, whether Indonesia exists or not in the history, we cannot ignore the other reality: the United States emerged as a
dominant force in 21st century, replacing the European countries that colonized Asia. But, without colonialism, Indonesia that we know today would have been very different. Regardless of how Dutch colonialism raised an intellectual generation of local nobilities in Sumatra, Java, or Bali.

Without the intellectual generation that was exposed by the wave of nationalism, as explained in Ben Anderson’s book, it is impossible that Indonesia would exist. The main point is that without colonialism itself, Indonesian would just have been a concept…or even a myth! Without Dutch colonialism that started in early 16th century, each Indonesian region would have become a separate political system.” According to Andi. “Without Dutch colonialism, maybe they would have remained one independent political entity.”
— 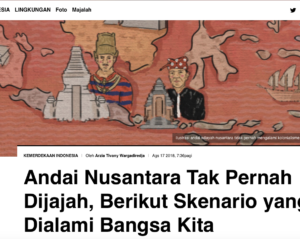