When are you ready to face the “Bersiap”? Exploring the polemic about a violent period in Indonesia right after the 1945-Proclamation 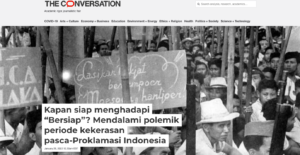 Because an Indonesian scholar was reported to the police in the Netherlands, the Indonesian public looked back on the violence after the 1945 Proclamation which was rarely discussed.

The “Bersiap” controversy was sparked by an article in the Netherlands with the provocative title ‘Delete the Term Bersiap, because it is racist’. The author is Bonnie Triyana, one of the four curators of an exhibition on the Indonesian Revolution at the Rijkmuseum, Amsterdam, the Netherlands. In the second paragraph it is written that the exhibition curator team has decided not to use the term “Bersiap”.

In order to understand this issue clearly, we need to be free from the trap of the Dutch/Indonesian dichotomy that has captured the public discussion of Dutch East Indies colonialism for decades.

“Bersiap” was often understood narrowly as post-proclamation “anti-colonial” violence by the colonized against the Dutch or other citizens who were considered their allies. A number of testimonies, such as the Indonesian journalist Kwee Thiam Tjing in his book Indonesia Dalem Api dan Bara, as well as several eye-witnesses who spoke to me orally provide a broader picture.

Perpetrators, victims and their motivations vary. There are political factors, there are racial animosities, there is sexual violence, there are various looting of property without any political content or racism but social class.

Many people believe that Indo (European-Indonesian) descendants are the main victims, although there is a possibility that the Indonesian victims are even higher.

Bonnie rejects the term “Bersiap” because according to him the term “always only frames Indonesian perpetrators of violence as savages”.

Always? Some people were surprised by the accusation. Unfortunately, Bonnie did not provide a single example of this grave accusation.

The “Bersiap” controversy exploded, not just because of an opinion article or this year’s exhibition. The source of the problem: for decades this incident has not been included in the official discourse of national history in the Netherlands or in Indonesia. It is only painfully discussed by some suburban residents scattered in various regions of the world. It is only recently that more and more young people are starting to know.

Until now, the thing that stands out in the current debate is the dichotomy of Indonesia versus the Netherlands. It’s as if there are two camps that are absolutely opposite, each uniformly united in his stronghold.

Fortunately, not all citizens in the Netherlands and Indonesia are swayed by such a black-and-white view. But as usual, the voice of the most extreme in a controversy is heard the loudest in the public sphere.

Not black and white

The Dutch and Indonesian people did not uniformly respond to “Bersiap”. The proof is that the Rijkmuseum is clamped by two contradictory legal charges. It was sued by the Committee of Dutch Honorary Debts (KUKB) because of continuing to use the term “Bersiap”. Previously, the museum (besides Bonnie) was threatened with being sued by the Federatie Indische Nederlanders (FIN) or the Federation of Dutch-Indo people, if they removed the term.

The plaintiffs and defendants are both Dutch citizens. But none of them represent Dutch society in general.

So it is strange if there are accusations that the term “Bersiap” is interpreted singly there and “always displays only Indonesian perpetrators of violence who are perceived as barbarians”.

If present-day Dutch society in general was as harmonious as the debate envisioned, perhaps there would not be an exhibition on the Indonesian revolution there this year. No Indonesians were invited to be members of the curatorial team. There is no debate about “Bersiap” which is currently rife.

The accusation that Indonesia denies “Bersiap” is as misguided as the accusation that the Netherlands denies the crimes of Dutch colonialism. Indonesians have been discussing the topic of Bersiap for several years, even though it has been neglected in official state discourse. Even the historical magazine Bonnie led herself used the term.

The crimes of the Dutch army (under the commander of the Dutch troops Raymond Westerling, famous for the Westerling Massacre (1946-1947) in South Sulawesi) during the Indonesian Revolution were thoroughly exposed in the film De Oost, a Dutch production itself.

The official discourse on national history is structured around the dichotomous framework of colonizer/colonized, friend/foe, good/evil. There is hardly any space between or outside the two camps that are absolutely and absolutely opposed. This official thought proliferates in everyday social life in various forms, from speeches, posters, films, to comics and jokes.

In the “Bersiap” debate which is confined to the Dutch/Indonesian dichotomy, the global Indo identity has once again become a victim, after they became victims in the 1940-1950s. This Indo identity refers to people of mixed European and Indonesian descent.

Their figures and voices were excluded because it was not easy to enter from one of the Dutch/Indonesian camps in the debate.

In the Netherlands, they are not Indonesian. But they are considered “less Dutch” because they are “polluted” by “Indonesian” elements. Meanwhile in Indonesia, they are Dutch and positioned in the enemy’s stronghold, because they are not fully “native”. The Dutch/Indonesian dichotomy is still maintained by some citizens in both countries, which have a long history of glorifying ethnic or racial “purity” fictions.

Because of “Bersiap”, thousands of Indonesians tried to save themselves by evacuating to various parts of the world.

Many have settled in their own homeland (Indonesia), either because they chose or were left behind.

Those who fled felt alienated in a new place, including the Netherlands. In some countries, to this day they form gatherings while reminiscing about Tempo Doeloe. Tempoe Doelole refers to a popular term used by various associations to refer to a period in the Dutch East Indies before it was called Indonesia.

The ones in the Netherlands don’t just gather for nostalgia. They are actively involved in local political issues, for example active in FIN

It seems that only Indos in Indonesia are not organized in a formal organization. They differ not only from Indos on other continents. They are also different from the Peranakan Chinese, Arab and Indian communities in their homeland, as well as neighboring countries, who are gathered in various organizations and appear publicly to celebrate their ancestral heritage.

Before the pandemic, I interviewed a number of Indo residents in Java as part of a research that was hampered by the pandemic. My initial impression is that the trauma from the “Bersiap” period is still heavy for them. It’s as if they are willing to let the identity and history of their ancestors disappear and leave the younger generation ignorant.

Questions for the younger generation

They are free to ask: after decades of being discussed without getting much public attention, why is it only now that “Bersiap” is suddenly being debated. Why does it still tend to be debated with the black and white dichotomy framework of the past century? No need to wait for the answer from the older generation like me.
—