Recently, as part of the Holland festival, a discussion evening took place on the shared Indonesian-Dutch past in De Balie in Amsterdam, titled “Writing history. Beyond the VOC-nostalgia”. This year music from Indonesia is a regional focus of the art festival, with an extensive program of contemporary music. But when it concerns Indonesia and the Netherlands, history quickly comes up. The festival welcomed Lizzy van Leeuwen (cultural anthropologist and journalist) and Ayu Utami (writer) to take a closer look at the remembrance of the colonial past in both countries. They also spoke about the (im)possibilities of writing a joint history.

According to Lizzy van Leeuwen the Dutch way of dealing with the colonial past is absolutely problematic. She spoke of a “postcolonial trauma” which expresses itself in several ways. The colonial past has for example never been included in the common history of the Netherlands. Instead she speaks of a certain “apartheid in historiography”, wherein the colonial past has been separated from national history. At the same time Dutch historians continue to claim authority over the historiography of Indonesia, building on a tradition that smooths over colonialism and ignores the critical studies of Australian and American colleagues.

Another problematic part of the Dutch way of dealing with the colonial past, according to Van Leeuwen, is the one-sided attention to the violent “good-bye part” of this history: the decolonization or independence war of Indonesia, for a long time also called “the police actions” in the Netherlands. Time and again the war violence continues to receive public attention, with the public reacting in a shocked and indignant manner to the stories of committed war crimes, since the national silence was for the first time broken in 1969 (see also: ‘Gordelroos van Smaragd’). But this “obsession for violence”, fed by feelings of guilt, does not help us to get on, according to Van Leeuwen. Therefore she is not very enthusiastic about the new large-scale research project on “Decolonisation, violence and war in Indonesia, 1945-1950”. According to her it does not emanate from real academic interest, but purely serves a Dutch political purpose. Moreover, such an approach comes at the expense of a genuine interest in the colonial past itself, instead of in its violent end. What we on the contrary need, she argues, is more attention to daily life in the colony and to the structural character of colonialism.

A bittersweet shared past

The Indonesian writer Ayu Utami approach the shared Indonesian-Dutch past from a very different angle. She did so by telling a story. When she visited the Netherlands for the first time, some 25 years ago, the country had a mystical meaning to her. It was the country of freedom, of boundless opportunities. The country where the protagonists of the Indonesian independence had been “enlightened” by nationalist and socialist ideas. But also the country that had suppressed her people for centuries.

She illustrated this ambivalence through the metaphor of a “bitter and sweet marriage”. Later she returned to pick up her Indonesian aunt. Her aunt had found the love of her life in the Netherlands, but now wished to return to Indonesia, due to circumstances and in old age. Her marriage with her Dutch husband had been bittersweet: they had accompanied each other for some time, each with their own shortcomings, but with a shared imagination. In the end their paths parted. With this story Utami called for a more “humanistic” view of the shared Indonesian-Dutch past. According to her, the image of the past in Indonesia is currently too black-and-white with hardly any space for subtlety. Whereas at the same time Indonesia has to a large extent been defined by colonialism.

All in all the shared Indonesian-Dutch past unquestionably deserves more joint attention. The colonial past, in its daily and often ambiguous reality, should be the central focus. However, both speakers seem to have little faith in historiography, which they think is too one-sided and politically biased. Instead, they see more potential in initiatives related to art, culture and literature to stimulate public interest in a shared colonial past. Of course, novels such as De Tolk van Java by Alfred Birney (recently awarded with the Libris Literature Prize) can contribute to this goal very well.

However, I doubt whether the future for joint history writing is really so dark. A hopeful initiative, for example, is the recently established foundation called “Histori Bersama”, or shared history. The foundation posts online translations of Dutch and Indonesian articles on the colonial past, and aims to bring Dutch and Indonesian perspectives on the colonial past together. 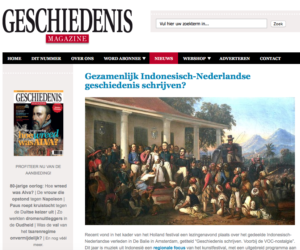 [Originally published in Dutch. Translated by Paula Hendrikx. Please send us an e-mail if you think you can improve the translation: info@historibersama.com]