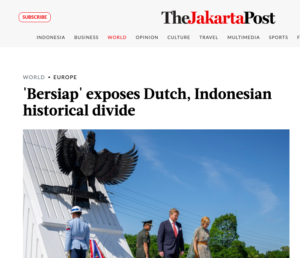 An Indonesian historian and two officials from a Dutch museum have been reported to the Dutch police over conflicting historical perspectives, which have forced the two nations to confront the violent end of Dutch colonialism in Indonesia.

Historical grudges are a mainstay in the Dutch-Indonesian relationship, due in part to the Netherlands’ ongoing refusal to recognize Indonesia’s 1945 declaration of independence, which underpins legal efforts to demand accountability for descendants of victims of war crimes, especially in the period immediately after independence.

On Jan. 21, the Committee of Dutch Honor Debts (KUKB), a group advocating compensation for Dutch war crimes, reported the Rijksmuseum in Amsterdam, its director Taco Dibbits and curator Harms Stevens to the police for their insistence on using the racially charged term “bersiap” in an upcoming exhibition highlighting Indonesia’s post-colonial history.

KUKB chairman Jeffry Pondaag stated that the term was “not only racist, it is also a form of historical falsification”, and that the group had reported the event organizers to the police after they rejected a decision to remove the word from the exhibition, a point that Indonesian guest curator Bonnie Triyana raised in an opinion piece earlier that month.

Bonnie’s article, published in Dutch media outlet NRC on Jan. 10, was supposed to promote a Rijksmuseum exhibition called “Revolusi! Indonesia Independent”, which offers an “international perspective” on the history of the Indonesian post-independence movement in 1945-1950. The exhibition is expected to run from Feb. 11 through June 5.

Instead, it elicited a strong public emotional response by the Dutch, with critics insisting on having the museum continue using the term bersiap for posterity.

Bonnie himself was reported to the police for alleged defamation and incitement by the Federation of Dutch-Indies people (FIN), a Dutch civil society group representing descendants of people from the former Dutch Indies, who also claim historical trauma from the period.

“I think Bonnie should step down because he was humiliated by the Dutch director and curator. What I understand from his article is that they agreed that those words would not be used,” Jeffrey told The Jakarta Post on Sunday.

Bonnie refused to provide further comment, but pointed to an article he wrote on Jan. 12 for the popular history publication Historia.id, of which he is editor-in-chief. In that piece, he argued that bersiap grossly oversimplifies historical facts and serves to reinforce racial sentiment.

Museum director Dibbits, in an emailed response to the Post on Wednesday, insisted that “within the project of the exhibition, we never avoided the word”.

Regarding the police report filed against Bonnie and him, Dibbits said the organizers were “waiting to see what [the Dutch Public Prosecutor’s Office] will do” with them.

According to Indonesian historiography, the 1945-1950 period is known as the years of the Revolutionary Wars, while in the Dutch collective memory it is known as the Bersiap period.

The term was recorded in history as a war cry – it literally meant “get ready” – that was used by young Indonesian revolutionaries who took up arms to defend against Dutch aggression after independence.

“In Indonesian history, they were simply known as fighters. But if we break it down into more detail, the groups comprised people from various backgrounds, including bandits and robbers,” said historian Agus Suwignyo of Gadjah Mada University in Yogyakarta.

Agus told the Post on Wednesday that bersiap was used in Dutch historiography to refer to a critical period of upheaval and violence, with losses on both sides.

It is virtually unknown among Indonesians, but is of profound significance in the Dutch version of history.

Thanks to the heated debate, it is back in public discourse.

Another historian, Anhar Gonggong, has urged the government to pull out of the Rijksmuseum exhibition as a “firm” gesture in protest at “Dutch egotism”, he said in a statement to a local media outlet on Jan. 27.

Seven paintings from the Presidential Palace collection are to be displayed at the museum during the exhibition.

Separately, University of Amsterdam historian Remco Raben said that while Dutch bersiap victims reserved the right to put their experience first, the public emotional response had also “obscured the historical complexities” of this period.

Raben, an independent advisor for the exhibition, said it would be “unfair” to paint a picture of the period without addressing the overarching military and colonial context.

“This is a shameful reaction, which only serves to emphasize the fact that many Dutch are still not able to critically evaluate their own colonial outlook on the period,” he told the Post on Jan. 28.

The unsuccessful Dutch attempt to regain control of Indonesia resulted in the deaths of thousands of Indonesian civilians.

During a visit to Indonesia in 2020, Dutch King Willem-Alexander offered a formal apology for “excessive violence” during the war of independence, but not for colonization. He also did not recognize Indonesia’s 1945 declaration of independence.
—- 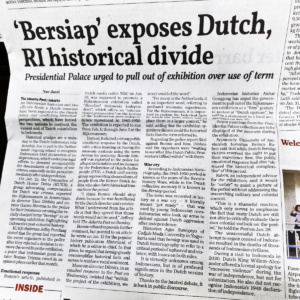