Nederland in Ideeën (The Netherlands in Ideas, 2019, this years theme: Hope)
By: Alfred Birney, Writer, essayist, columnist and author of “The Interpreter from Java”
— 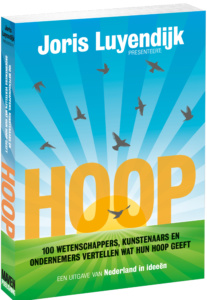 Frequently, in recent years, reports appear about the Dutch colonial past and it seems this will remain so for some while. At the time, newspapers and television determined the subject of the debate. Now we have internet, which, despite the involvement of governments, search engines, secret services and bosses of social media still has an anarchist character. All opinions can be expressed. The traditional media must follow internet trends if they do not want to lose readers, listeners and viewers.

For example, the Black Pete discussion in the Netherlands is no longer an exclusive phenomenon for just the month of December, now we are having this discussion throughout the year; the history of slavery is part of the public debate. Activists tagged the statue of Jan Pieterszoon Coen, called for a noise demonstration during the National Remembrance Day and received death threats. They are accused of wanting to erase history, while in fact they aim for the exact opposite: we Dutch people have to learn to see our history in a different way.

This is my opinion too. Previously the general knowledge of colonial history was already limited, but it went really wrong with the introduction of the so-called “Mammoth Act” in the 1970s, which was not exactly intended to refresh our collective memory. High school students were allowed to compile their own curriculum, history was no longer a compulsory subject and generations grew up with the historical knowledge of a shrimp. This played into the hands of the Dutch government, which, for more than half a century tried to hide colonial history, while pointing fingers at Germany, who admitted guilt for war crimes in World War II. The Dutch also pointed fingers at Japan, as this country had the nerve to invade the Dutch East Indies and had put Europeans in camps, and then subsequently erasing this from their history books. Even South Africa’s apartheid was criticized from within the Netherlands, meanwhile forgetting its own racial system in “the model-colony” the Dutch East Indies. Finally, the Dutch also protested against the US bombing of Vietnam.

In retrospect, US citizens admit that not only their leaders, but the entire population were to blame for the Vietnam debacle. Countless Vietnam films were made, including many pop songs about the miserable “Asian war” that ended up in the top music charts. Netflix produced a ten-part series about the Vietnam War, including errors and war crimes. Meanwhile the Netherlands does not go much further than producing films of books from 1900 and before. Yes, I heard enough about our own heroic resistance against the Germans.

[Dutch government] money has been spent on new investigation into war crimes during our last major colonial war. The independent research project is called “Decolonization, violence and war in Indonesia, 1945-1950“. The money goes to three institutes: The Dutch Royal Institute for Linguistics, Geography and Ethnology (KITLV), NIOD Institute for War, Holocaust and Genocide Studies and the Netherlands Institute of Military History (NIMH). It is fake. Everything has already been written, nothing new will come to surface, it just needs to be told and taught, that is what this is all about.

How independent is a study by three institutions of which the government is in charge? The research is led by people who say they want to cooperate with Indonesians; however, they did not invite one single Indonesian to the obligatory kick-off-event of the research. “We fired at you, but you fired back.” As one of the participating researchers said. Well, if you express these kinds of ridiculous thoughts, it is better not to invite anyone.

The investigation starts with the analysis of violence on both sides, and to make it easier for themselves the Dutch don’t take anything from Indonesian historians. The research is said to explain Dutch violence by studying the broad context of post-war decolonization at international political, administrative, judicial and military levels. International, right? We cover our backs again. And what would that “explain” mean? Another justification for the war that we call “Police Actions”? Does this mean we have sit down for years and wait for the researchers to come forward with their findings, just before they are going to celebrate their retirement? Of course, we have to see the results “in the context of that time”. The same old song. And I’m sure that the history lessons at our schools will remain optional.

Is there hope? Yes, there is a new generation. The trilingual platform “Histori Bersama” is the thorn in the flesh of the three institutes. In the documentary “The Uprising” (2019), Pravini Baboeram unravels centuries of our colonial history. What a shame for the Netherlands that she has to tell the colonial story from 1500 to the present in English. Independent researchers have come up in the US and Belgium who will certainly be faster than the trio of institutes and their publications. They do not suffer from that peculiar Dutch mixture of colonial shame and arrogance and will, hopefully, point fingers at us, just as we have done with other nations.
—

“Nederland in Ideeën” is published by Maven Publishing: https://www.mavenpublishing.nl/boeken/hoop/?mc_cid=f109f49507&mc_eid=f2c259082e 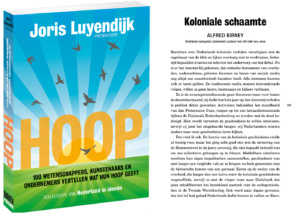 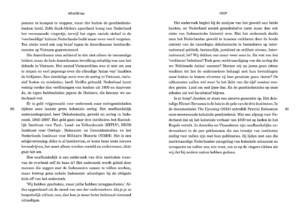