Founding historibersama.com to bring memories together

Indonesia and the Netherlands have a shared history together. However, both [countries] never agreed about the interpretation. Including the view on the figure of Sutomo, alias Bung Tomo.

10 NOVEMBER 1945. The big battle of Surabaya started. The roar of guns, cries of passion eventually led to the inevitable bloodshed. At that time it was like the ‘arek-arek Suroboyo’ were possessed by the fighting spirit. With only one goal: defending the independence. Defending the sovereignty against the occupation by another nation. During that day, all citizens of Surabaya became a hero of the nation.

Among them was Bung Tomo whose speeches encouraged the heroism of the ‘Arek-Arek’. His name was remembered and recalled in the national history of Indonesia. But faraway, in the Netherlands, they look at this history from a very different mindset. A figure as Bung Tomo is seen as a war criminal.

The Dutch Marjolein van Pagee previously didn’t know much about Bung Tomo. However, currently this master student of Colonial and Global history (Leiden University) started to write a thesis that focuses on this proud Surabaya freedom fighter. She also came to Surabaya to find history books about the trail of Bung Tomo in the past. Mar, how Marjolein is being called sometimes, intends to study the history from two perspectives; from the Indonesian and the Dutch side.

She did not choose this topic without reason. It all started when she on 10 November 2014, participated in a reenactment of the Battle. At that time, this woman who has been born in Goes on May 2, 1987, played the role of Ktut Tantri; an American lady who broadcasted on Bung Tomo’s radio station. This is when Mar realized how important the figure of Bung Tomo is for the residents of Surabaya.

The name of Mar became known in Surabaya afterwards. There are photos that capture the moment when Mar stands right next to the actor that played Bung Tomo, these pictures were published in the media. Mar also uploaded photos on her Facebook.

Surprisingly, Mar got an extreme reaction of a journalist in the Netherlands. In an article published on October 18, 2016, the journalist wrote that Mar her actions were very improper because she had been posing next to a war criminal that was known [in the Netherlands] as an extremist. That motivated Mar to research Bung Tomo and how he has been remembered differently by the two countries.

Earlier, Mar was not interested in history particularly. The eldest among four siblings is a bachelor in the field of photography [which she obtained] in Breda. Later Mar found a picture of her grandfather, Jan van Pagee. Jan was a Marine who was sent to Surabaya around 1947-1948[49].

Mar started to search the traces of her grandfather and went to Indonesia in 2010 where she also interviewed Indonesian veterans. She collected information about her grandfather’s journey during the military action. These experiences gave Mar a new historical perspective. Not only about Bung Tomo and the story about the battle of 10 November 1945 but she also researched the whole period of 1945-1948[/49]. There are many different perspectives about this period in the history of both countries.

Mar collected historical information through interviews, radio reportages and photo shoots. The stories and portraits that she took from Indonesian veterans were brought back to her country and presented in exhibitions named: ‘Kembang Kuning-Gele Bloem’.

A sequence of portraits of Dutch and Indonesian veterans became the main theme in exhibitions that were organized several times. One of the largest exhibitions was held in 2014 at Art Gallery Zerp, Rotterdam.

Of course, there are several different responses. One Dutchman admitted that the Indonesian veterans were real freedom fighters however another Dutch stated that: “They have blood on their hands,” explains Mar. There are also positive comments. In fact some Dutch veteran feel guilty that they had to fight against the Indonesian people. Indeed, in a war the loser is always humanity, human values. “Those people just wanted freedom,” said Mar, quoting another Dutch veterans that she interviewed.

This is how Mar found out about the different views on history between her country and Indonesia. These differences should be discussed together. Therefore, Mar created the website historibersama.com.

The site [foundation] was launched on September 2016 with the idea to present the different historical perspectives between the Netherlands and Indonesia. It offers translations [of articles that were published] in both countries. According to Mar, the language-barrier is one of the reasons that it is difficult to bring the perspectives of both countries into one. Besides building this online platform to share information, she also organized discussions in the form of movie screenings. One of them took place in Amsterdam. “I just wanted to show how it is: Here we have the thought of the Dutch people and this is the thought of the Indonesian people”, she said in English.

To get the site historibersama.com operational she used her own money. The website is managed by herself and since then the site began to spread and became more known. Mar is currently visiting Indonesia to promote [her initiative] in several cities. She goes to Surabaya, Malang, Yogyakarta, and Jakarta. Mar also plans to organize a discussion on April 9th at Tugu Pahlawan [Heroes Monument]. The goal is the same; discuss the history from the two viewpoints. “To heal this pain together, all we need is understanding,” according to Mar. (*/c6/dos) 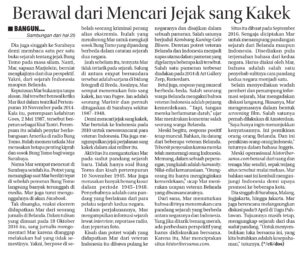